Who Coloured In The Food?

Posted on March 3, 2012 by Lose Weight and Gain Health

I have missed pottering about in the kitchen this week and was looking forward to being in there today.  I am irritated about no heating or hot water especially since my kitchen, with 3 outside walls, is the coldest room in the house.  So we put on lots of layers and enjoyed being together anyway.

I had a proud Mummy moment.  Harvey made himself some porridge for breakfast and asked what fruit was available for him to add to it.  And then he added some nuts so I was thrilled he is instinctively making healthy food choices :-).  So proud.  He did also add some chocolate which is not so healthy but I liked his creativity in the kitchen.  His breakfast of porridge with a grated apple, handful of macadamias and 3 squares of Mayan Gold tasted very good. 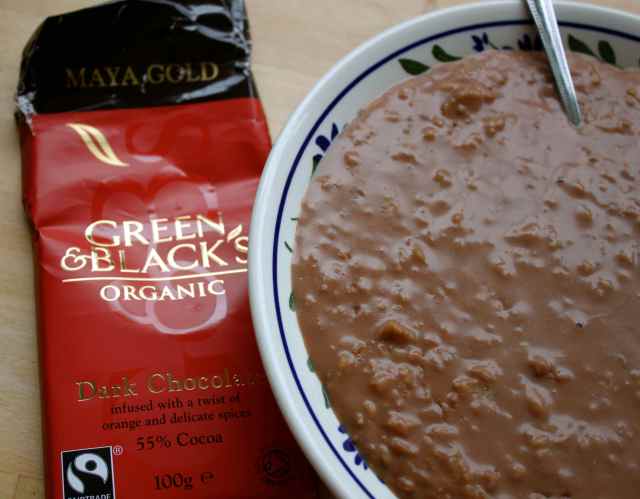 I went for a very healthy option. 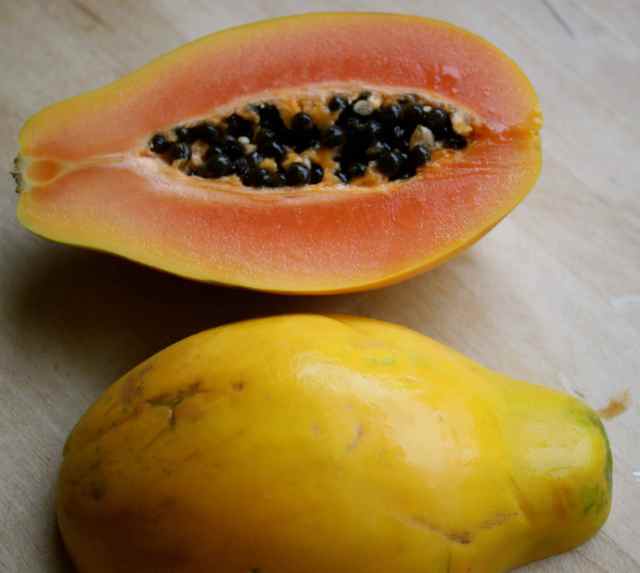 40 g quinoa (80 g when cooked), with a papaya, 1 tsp sunflower seeds and 1 tsp golden linseeds.  I ground the seeds in a coffee grinder so they were like a powder which makes them easier to digest.

I am a recent papaya convert and I wouldn’t eat it on its own as I slightly dislike the texture but mixed up with quinoa it was lovely.  It had a clean and fresh flavour and was perfectly ripe.

I bought something new this week in the market.  I think they were called ‘French Truffle Potatoes’.   They were black on the outside

They tasted earthier than white new potatoes which Harvey didn’t like but I did and I really liked the contrast on the plate.

I had the potatoes with ham and salad:

Then I prepared supper.  I had a gammon ham which I cooked in the slow cooker.  I have found a great site for those of us with a slow cooker (or crock pot as they call them in the USA) Crockpot 365.  Stephanie, the blog writer, has published 2 books about slow cooking and written this great blog with a different recipe for every day.  I followed Stephanie’s recipe exactly for

While supper was cooking we went for a walk in the forest.  The rainy morning changed in to a sunny afternoon and it was lovely outside. 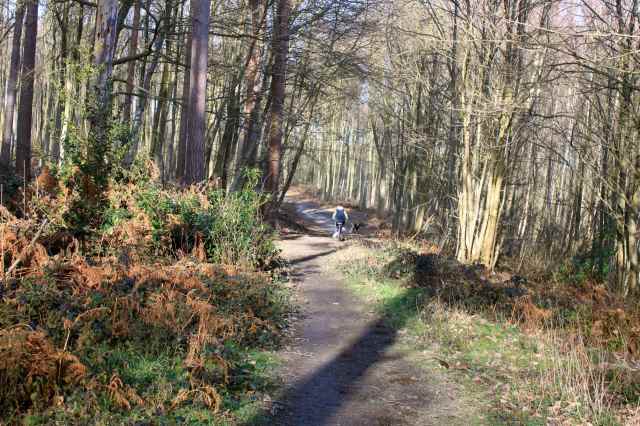 I walked, Harvey cycled and the dogs ran.

The local forest is criss-crossed with numerous tracks.  We usually follow the same route but today Harvey decided we should do something else so he chose which tracks we went up or down.  Some were more challenging than others!

It was so good to be out in the lovely countryside.  Much as I have enjoyed being in London this week, I have missed being outside in the fresh air.

Someone was a little bit cheeky about how much time he had to spend waiting for me to catch up!  Our new routes added to the walk considerably and we spent one and a half hours walking/cycling/running through the forest which was lovely. 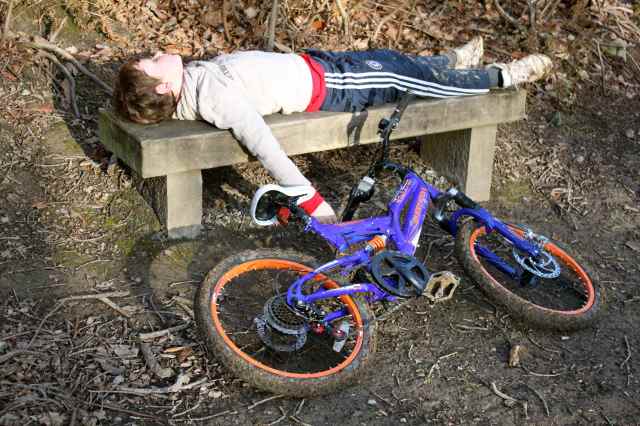 This one is especially for Elaine, in case she is missing the lovely Kent scenery, either in reality or in my blog 🙂 .

Back at home I had a lovely surprise.  I received a lovely basket with a beautiful plant in it.  Thank you Marie 🙂

Who made the mushrooms pink 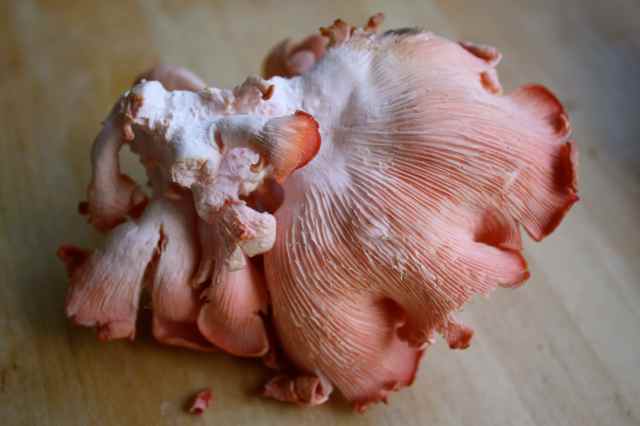 After the walk I was really hungry so I had a bowl of cereal with yogurt.  Then I just zonked out and fell asleep on the sofa.  I had been awake since 5 am which I could have done without after a first week in a new job.

Even though I was looking forward to cooking today, I was too tired so James finished off supper, thank goodness.  He sliced the mushrooms and gently fried them in butter with a tiny amount of salt.  They were delicious.  Very meaty in texture and full of flavour.

The gammon was served with mashed potato, carrots, peas and a spoonful of the glaze. 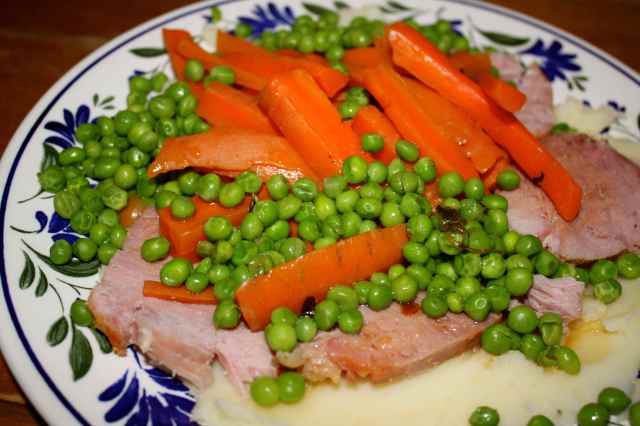 The gammon was tender and flavoursome but I realised too late I should have pre-soaked it so it was a bit too salty.  Not inedible but not as good as it should have been.  It will be good to use up in a soup or to add to an omelette or something in the week.

Looking back at my food today, I can see that it was all very, colourful.

Hi! My name is Zoe and I live in Hastings, East Sussex, with my son Harvey and dog, Milton. I have been fighting the fat for years but this time I am serious. I want to lose weight and gain health. This blog is about how I am changing my lifestyle so I can lose weight but not by just "being on a diet" but by making small changes to our lives so that as I lose weight, I gain health. I want my family to be healthy too and never have to struggle with their weight like I have. In common with many large people, I have gained and lost weight many times over the years. This time, I want to lose it and maintain a healthy low weight. I am interested in eating food that is nutrient dense and delicious and that appeals to children and adults. I do not eat animal products so follow a vegan diet. I try to use locally produced food supplemented with what I can grow myself. I support and try to use local farmers markets and farm shops. Another objective is to add more exercise to our days. It sounds so simple when I write it down :-)
View all posts by Lose Weight and Gain Health →
This entry was posted in Healthy Lifestyle, Recipe and tagged Papaya, Potatoes, Quinoa, Salad, Slow Cooker. Bookmark the permalink.

8 Responses to Who Coloured In The Food?