Posted on February 9, 2013 by Lose Weight and Gain Health

This is so much easier at home!

I was up bright and early and inspired by the promise of a pretty sunrise which I hoped would turn in to a sunny day.

I was hoping for one of those bright crisp days with a deep blue sky and sunshine.

Despite the early promise of sun, it was soon another grey day! But it was Saturday so I had the day at home.

I broke my fast with tea with cayenne, maple syrup, goji berries and lemon. 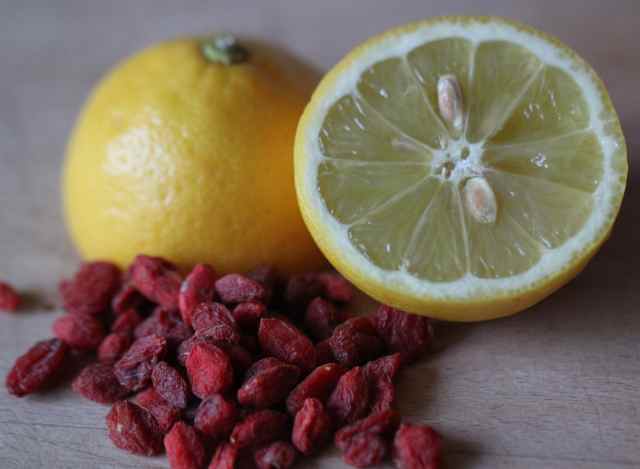 I read through Hugh’s Veg everyday! while I chose what to make for lunch and supper.  This book contains so many healthy and vegan recipes. 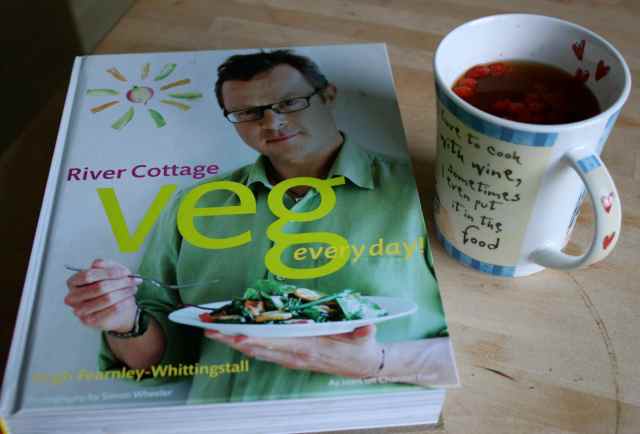 With a menu planned, I made 30g porridge oats with 100ml hemp seed milk and water, 15 g chia seeds, 1 apple grated, 1/2 tsp cinnamon and 20 g almond nut butter swirled in at the end.  I love the almond butter as it “melts” in to the warm food.  Warm and comforting and a lovely change from breakfast during the week which is always cold.

Mid morning I was hungry so I snacked on some almonds and dates.

I was pleased to see this sign on a packet of noodles – I wish more foods were clearly marked as it gets vey tedious having to read labels.

Noodles were on the menu for lunch.  I didn’t have enough of one type to just use one so I mixed two types together.  These wholewheat noodles are presented so well, with little bundles within the packet, tied together by a strip of paper.

From Veg everyday! I made the ‘Herby, Peanutty, Noodly Salad.  I have blogged the recipe for this dish previously here.  I used different noodles and vegetables today but the same sauce and it was as delicious as last time. 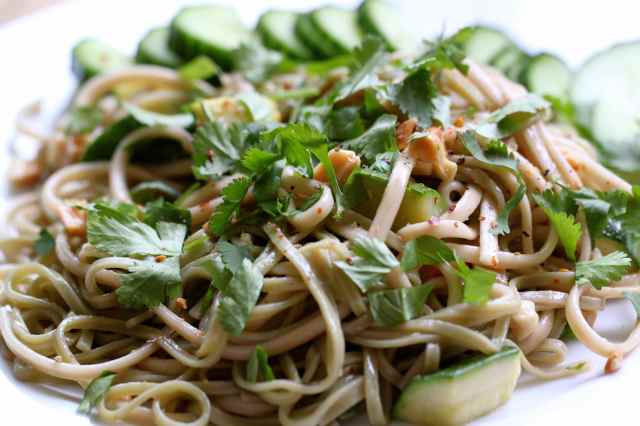 It was spicy, from the dried chilli flakes,

herby from the coriander, 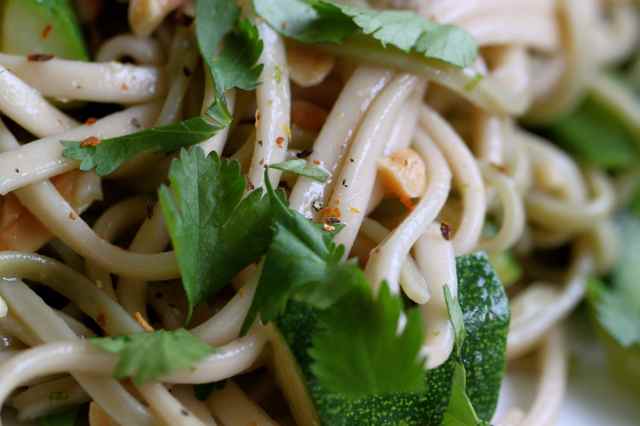 and vegetabley!  Really tasty and the 4th portion is in a tupperware box in the fridge ready for a work lunch one day next week. 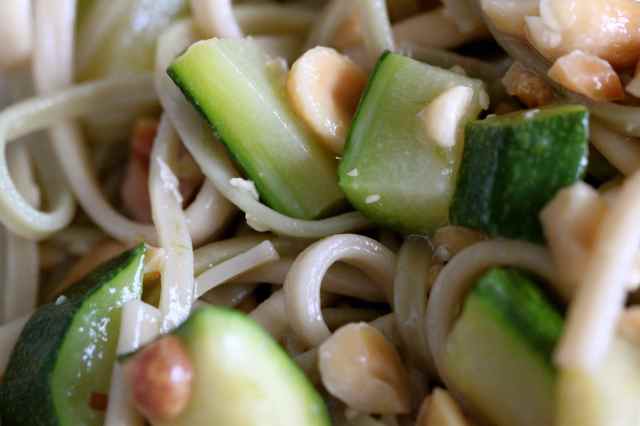 I did something unusual today and went out for afternoon tea with Marion, Lisa, Suzanne and Mirella.  We went to the coffee shop at Hartley Dyke which I have never been to before even though I regularly shop at Hartley Dyke.  It was lovely sitting there looking out over the orchard.  There was NOTHING in there that I could eat though and apparently I am the first person who has asked for vegan food.  I am really surprised so vegans are clearly a minority in this part of the world.  Are there any vegans around here? So I drank Earl Grey tea with no milk but a sugar cube in each cup.  Having set my heart on a sweet treat I drank it rather than ate it!

I have missed my girlies so it was lovely to have a chance to catch up, especially sine I missed a night out we had planned this week due to me working too late (and starting so early).

Supper was another recipe from Veg everyday!  I made the roasted potatoes and aubergines. 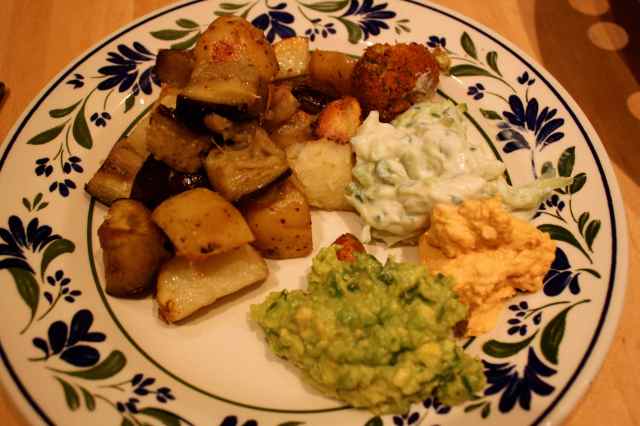 This is so easy it barely warrants a recipe.  I chopped up potatoes and 2 aubergines in to 2 cm cubes and roasted them in a hot oven for half an hour, turning once in the middle.  After half an hour I took them out and added 2 minced garlic cloves , a little lemon juice, salt and pepper.  I roasted them for another 15-20 minutes.

I served the potatoes and aubergine with tzatziki I made with soya yogurt, cucumber, olive oil, garlic and salt and some guacamole.  I used my standard guacamole recipe; 1 avocado, juice of 1 lime, finely chopped coriander and salt.  I also served some humous which came with roasted red peppers in it plus I had 1 falafel as there was an open packet which needed to be finished.

This was a lovely filling meal with big gutsy flavours, mainly provided by the garlic.  There will be no vampires in here tonight. 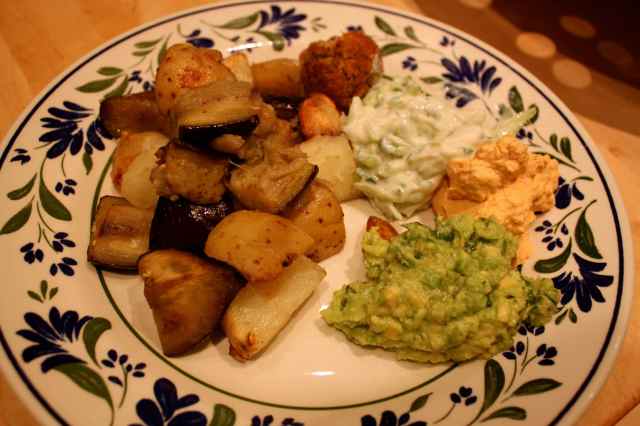 Have a great evening 🙂 .

Hi! My name is Zoe and I live in Hastings, East Sussex, with my son Harvey and dog, Milton. I have been fighting the fat for years but this time I am serious. I want to lose weight and gain health. This blog is about how I am changing my lifestyle so I can lose weight but not by just "being on a diet" but by making small changes to our lives so that as I lose weight, I gain health. I want my family to be healthy too and never have to struggle with their weight like I have. In common with many large people, I have gained and lost weight many times over the years. This time, I want to lose it and maintain a healthy low weight. I am interested in eating food that is nutrient dense and delicious and that appeals to children and adults. I do not eat animal products so follow a vegan diet. I try to use locally produced food supplemented with what I can grow myself. I support and try to use local farmers markets and farm shops. Another objective is to add more exercise to our days. It sounds so simple when I write it down :-)
View all posts by Lose Weight and Gain Health →
This entry was posted in Dairy Free, Keep It Local and tagged Almonds, Avocado, Cucumber, Noodles, Oats, peanuts. Bookmark the permalink.