The Beginning And The End

Posted on October 31, 2012 by Lose Weight and Gain Health

We woke up to plenty of clouds again today but the winds have gone for the first time in about a week!  We watched the news with horror this morning, now that Sandy has moved on to New York and beyond.

We tried somewhere new again for breakfast.  I really wanted somewhere healthier so opted for a Cuban juice bar.  I had a watermelon and orange juice

with a ham and vegetable omelette.   I didn’t eat the chips or the bread it was served with. It was all a bit disappointing though, from the basic cafe environment to the quality of the food.  The coffee was good, the rest mediocre.

We had planned a pool day today but decided we didn’t want to be in the sun after yesterday’s over exposure so late morning we made the decision to drive to the end of the Keys to Key West.  There are so many stories about Key West and I had been waiting quite impatiently to get down there.  We decided against it until now due to an enormous festival going on there.  Key West is known for it’s “anything goes” attitude so we decided the Fantasy Fest Parade and parties were probably not a good option for a family!

As soon as we arrived I loved it.  There is such a fascinating history to Key West which is reflected in the buildings.  They are gorgeous and  I could have photographed nearly every single one.  First stop was a traditional old fashioned style ice-cream parlour –  Mattheessen’s 4th of July on White Street.

It was hard to decide what to have.

I saved a couple of calories by having my toasted coconut and butter pecan in a bowl rather then a cone.

We had ice- creams and shared a huge white chocolate and macadamia cookie.  Everything here is handmade in small batches so it tastes like home made.  It was a naughty treat but so delicious it was worth every calorie.

After the ice-cream we walked around this amazing town. 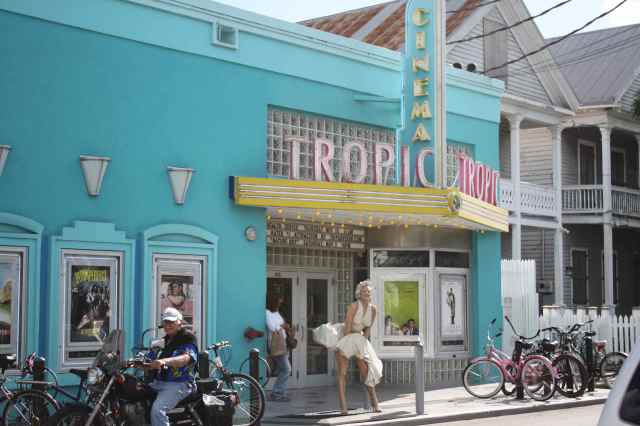 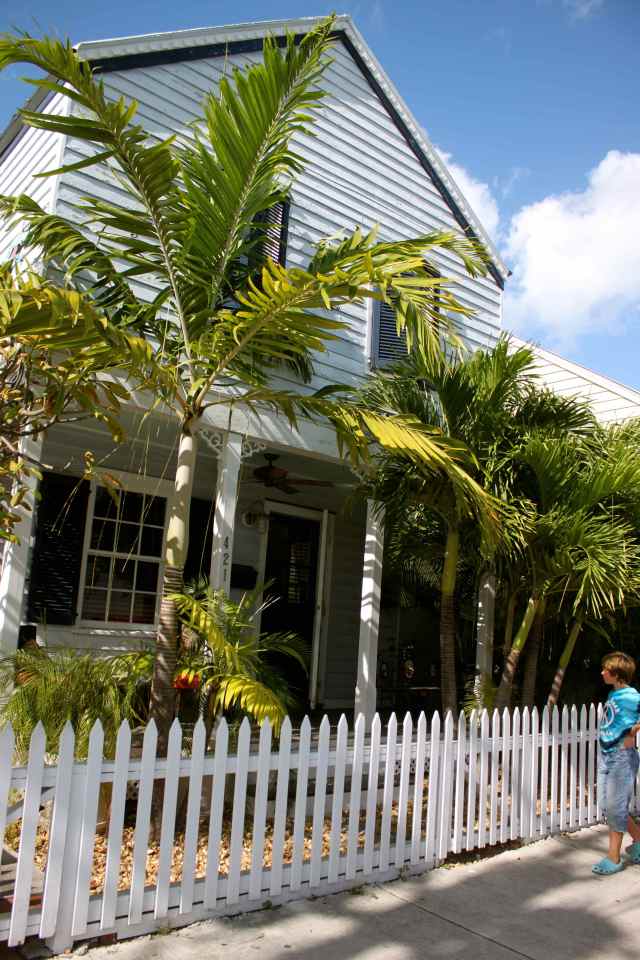 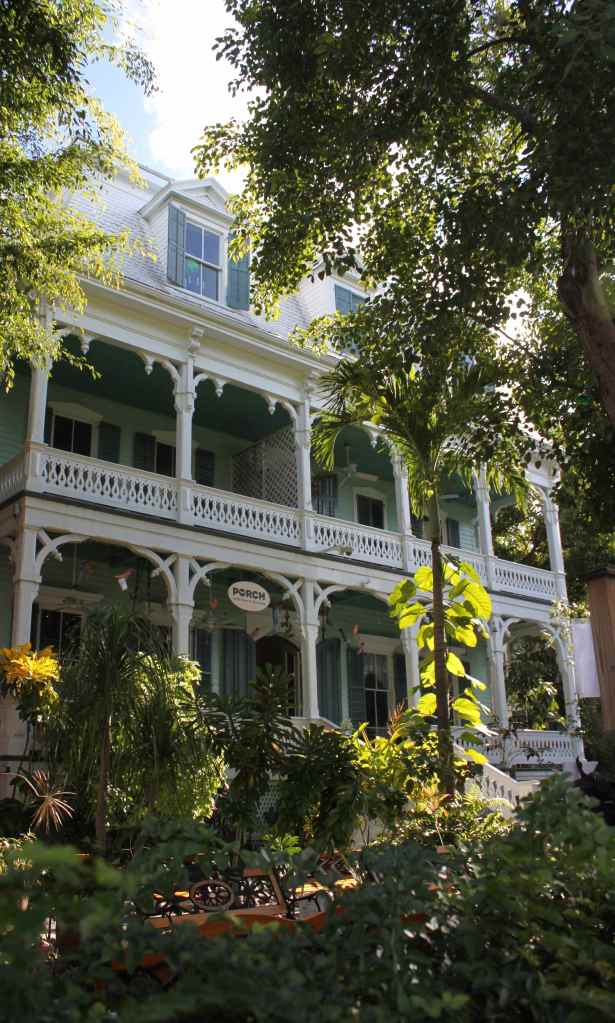 You see a lot of this blue colour painted on to furniture round here – the sea around the keys is a similar colour.

Key West is very colourful.  A lot of the buildings are painted pastel colours.  Everywhere you go there are bars, many with live music playing. Where are you girls?  I want to party here – it would be amazing :-).  This is a colourful bar along a pier looking out due West.

In the distance is a little island with some houses and boats bobbing about. 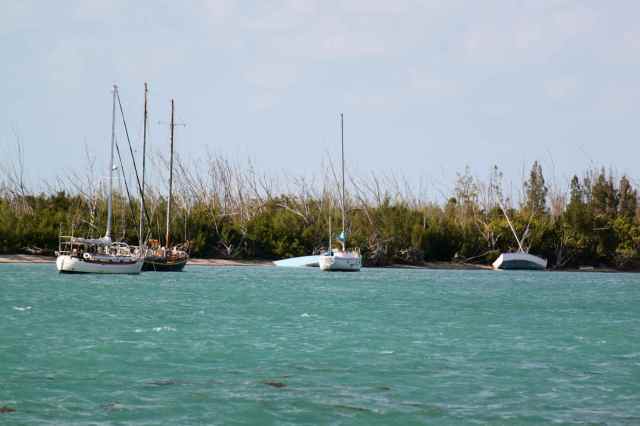 Key West is only 90 miles from Cuba so there is a big Cuban influence here; restaurants, cigar shops

and art for example.

There are plenty of shopping opportunities, many of which are rather tacky but great fun when you are pootling about, such as this shell shop. 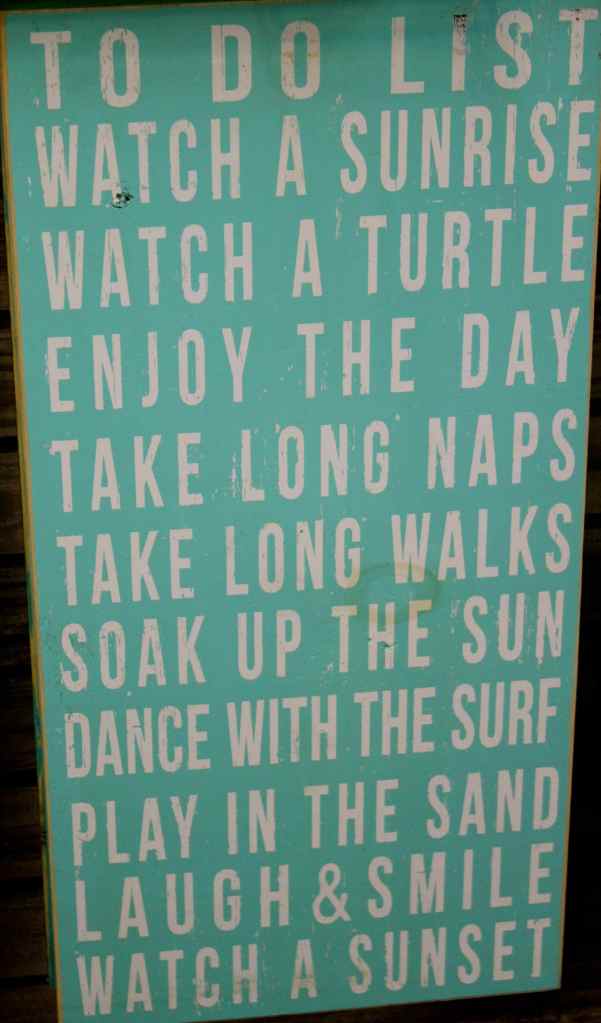 Many well known people have lived in key West; James Audubon, Harry S.Truman, Tennessee Williams and Ernest Hemmingway.  Hemmingway regularly drank in a bar that was called Sloppy Joe’s in his day but is now known as Capt. Tony’s Saloon. 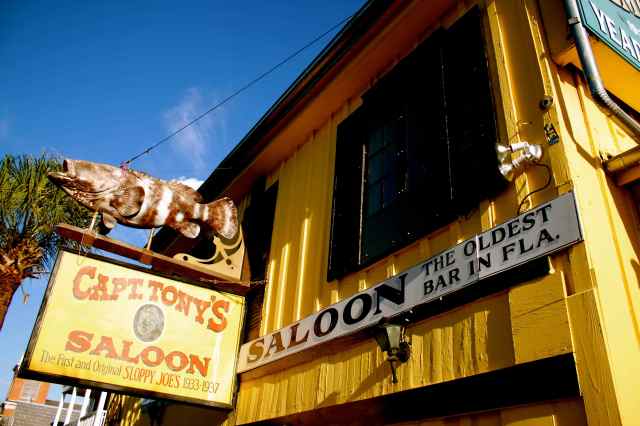 Inside the walls and ceilings are covered in visitor’s business cards.

I wanted to have a drink here but that would not have been much fun for Lara and Harvey so instead we settled down in a Mexican restaurant opposite for an early super.

We sat at the open window and enjoyed watching the street life pass us by. 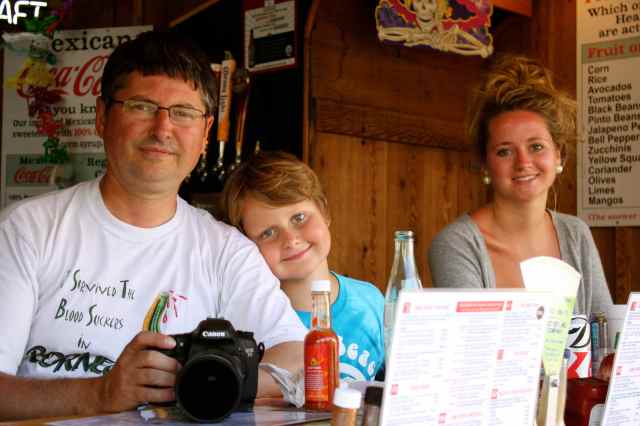 A frozen margarita was required while I chose what to eat.

I ordered Nachos with beef, black beans, tomatoes, cheese and sour cream.  I thought the large green circles were peppers so popped a whole piece in and ate it but they were in fact chilies – a very spicy error! 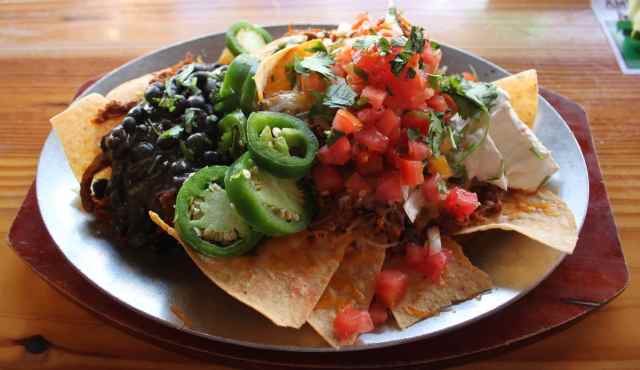 Much hotter than this amusingly named hot sauce!

After dinner we strolled back to the water front to Mallory Square.  Apparently every night at dusk people gather to watch the street performers and watch the sunset over the ocean.

It was great fun with a festive atmosphere.

Not the most amazing sunset but it was still a pleasure to watch it, with nothing between you and the sun disappearing but miles of ocean and the occasional ship or bird. 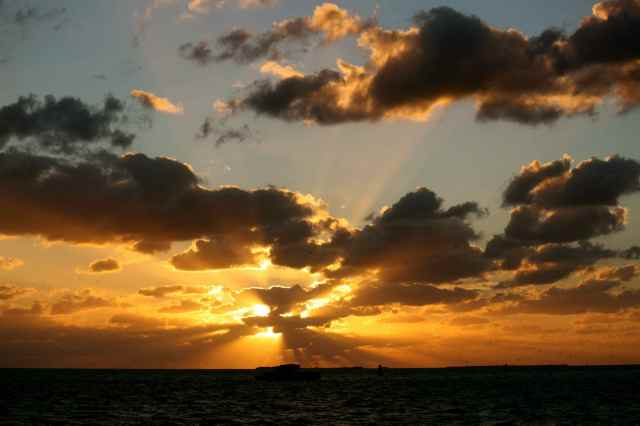 There was still so much to see !!!!  I didn’t want it to get dark.  We walked about a little more but it was more appropriate to head back to our hotel.  I don’t think Key West as night is the place for an inquisitive 10 year old.  We had 2 particular things we had to see before we left though.

One was this pillar which we had seen countless pictures and models of.  We had no idea it was so big but it is the marker that we were standing in the the Southernmost point of Continental USA and were only 90 miles from Cuba. 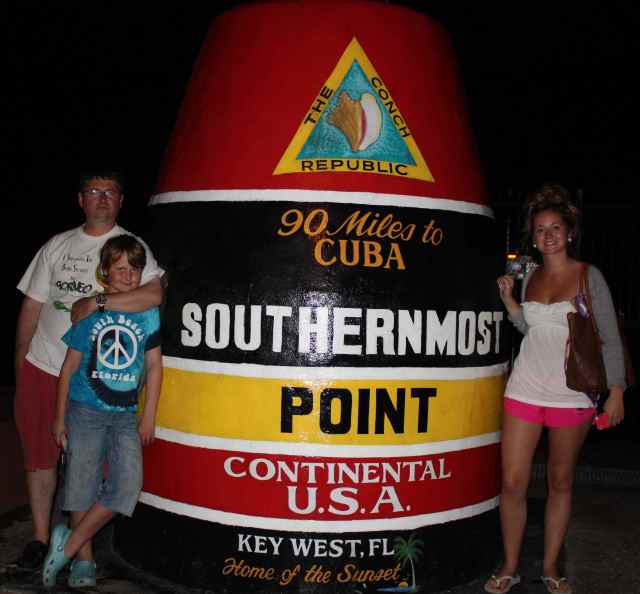 We also visited another marker.  On the way we came across the Kapok Tree. 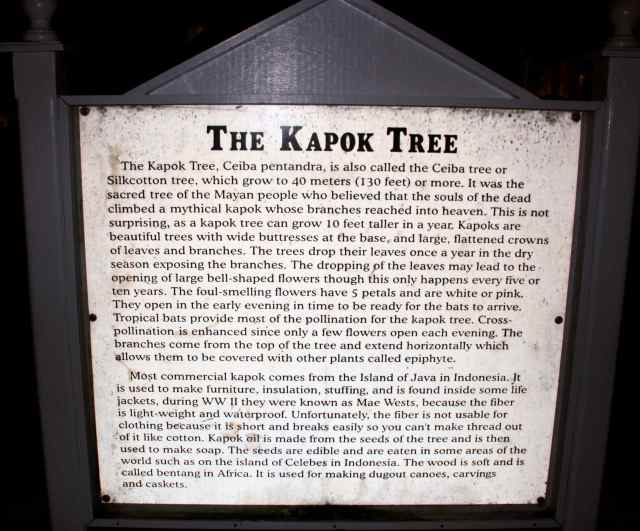 Look at those buttresses!

This is a hint of one of the signs we wanted to see. 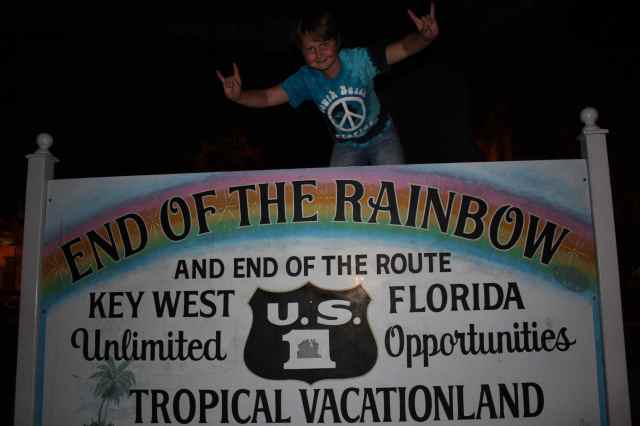 In the Keys, locations are pinpointed by the mile markers.  They start in Key West at zero and every mile along the keys to Miami is a green sign telling you the mile marker.  So we know our resort is at Mile Marker 61.   That means we are 61 miles away from Key West.  It makes getting around very easy.   We wanted to see mile marker zero, where it all begins. 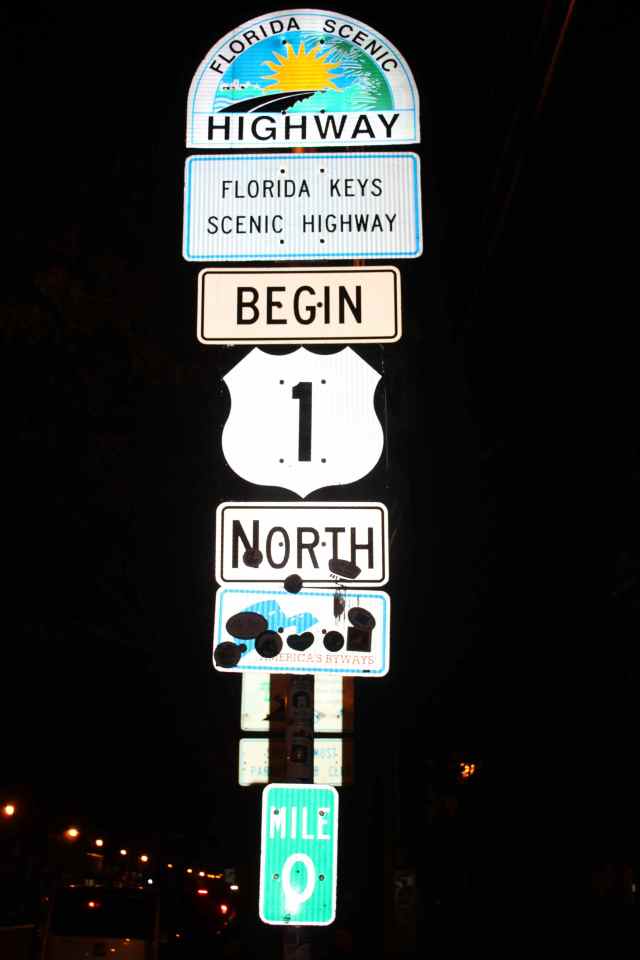 On the other side of this road is the sign telling us that US Highway 1 has ended.  So Key West is the beginning and the end.  With everything in between accepted.  It really is an amazing place and one I want to return to.

I am sure one day I will.

5 Responses to The Beginning And The End