The Calm After The Storm

Posted on November 1, 2012 by Lose Weight and Gain Health

We went to a brilliant place for breakfast this morning – Mangrove Mike’s.  The place was great, the food fabulous and it was next door to a very good art gallery where I could have spent a fortune but I was really good and didn’t buy anything at all.

It is off Highway 1 in Islamorada in another unassuming building that is much bigger inside than it looks from the outside.   It has booths,

we love the booths!  The photos on the wall were great too.

Next time we may sit here on these bar stools. 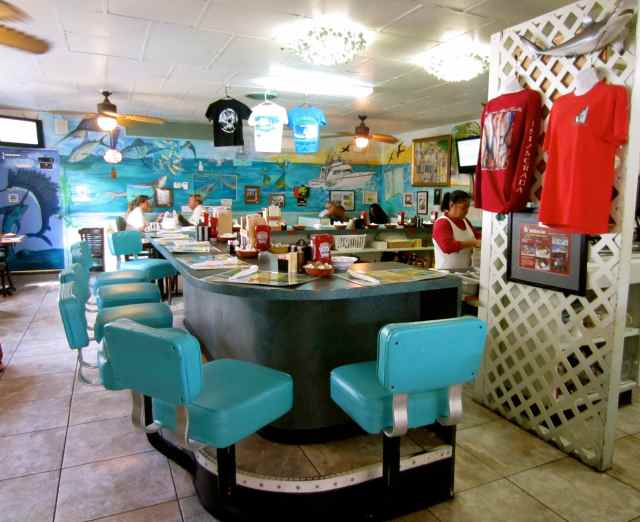 The menu was one of those menus when you wanted to order everything on it. 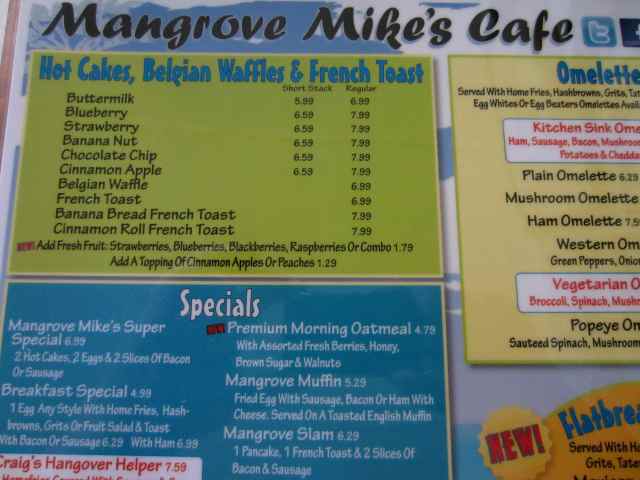 I went crazy and ordered something very unhealthy – cinnamon roll French toast!  With peaches.  Yes, it is what you are thinking it is – those lovely cinnamon rolls dipped in egg and fried.   I got such a sugar and white carb rush from this I felt quite bleurgh!  Not Mangrove Mike’s fault though, the food here was all great and we all ate up everything.  I just made a poor nutrition choice.  By the way, it tasted really good! 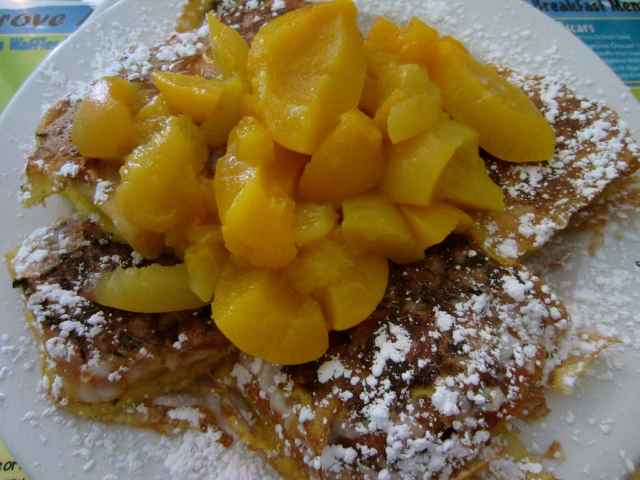 We had a lazy day in our resort today.  We did quite a lot of driving yesterday so wanted to stay put.  Also, we really like our resort and haven’t had a good look round it yet.   We are staying in Hawks Cay which is on Duck Key, one of the islands forming the Keys.  I chose this resort because it is near the middle of the Keys. 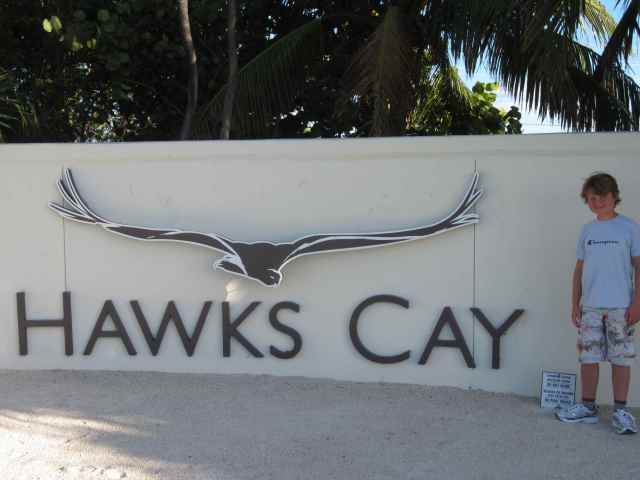 Our hearts go out to everyone along the East Coast and the Caribbean who are struggling with the damage and loss left by Hurricane Sandy. 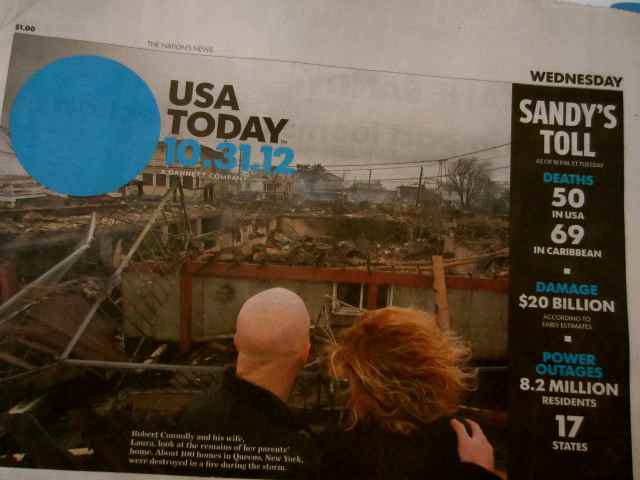 But here in the Keys the day was unnaturally calm.  This is Florida Bay which is usually quite choppy.  The sun was shining brightly, the sky was blue and there was virtually no wind so it was really pleasant here.

So it was decided, we would spend the day at the pool.  Well, Lara, Harvey and I did.  James went off twitching!  Come on, I’ll show you around…….

This is the main pool area.  In the evenings the centre of the water feature in the middle of the brown chairs becomes a fire pit which is a very pleasant place to sit and have a drink.

Off to the side of the pool is a Tiki Bar.

Love the colours of the stools.

Beyond the pool is the saltwater lagoon.  The recent higher than normal sea levels has enabled some fish and jellyfish to enter the lagoon so it was quite empty here today.  This is usually where we sit but we re-located to the pool.  Beyond the lagoon is the boat channel to allow boats in and out of the marina and beyond that Highway 1 which is a wonderful series of bridges beside Duck Key. 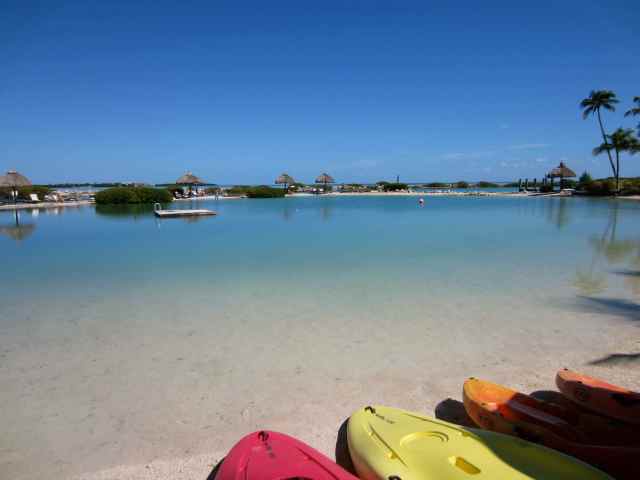 Having re-located to the pool, this was our view for the afternoon.

I treated myself to a cheeky beer.  Well, I am on holiday 🙂 .  By mid-afternoon I was feeling a bit restless.  I am often so busy and dream of lying beside a pool or on a beach but when it comes to it, I start to think about other things I could be doing.  Such as going for a walk round the island.  I persuaded Harvey to come.  It’s Halloween.

I have not been deep sea fishing before but everyone here seems to do it and I really fancy having a go.  I have fished off piers and in little boats before but really wanted to go out in a big boat and catch something we could have for supper.  Quite a few restaurants here will cook the fish you catch for you.  These are all available to be chartered so I went inside to enquire – eek!!  They are expensive.  The smallest boat was $700 for half a day so my new deep sea fishing hobby may have to wait a while.  Shame as I think we would have enjoyed it.

So we continued our walk around the island.  We found one of the resort’s other pools.

We wandered over several small and pretty bridges as Duck Key is a series of small islands.  I am not in the resort any more by the way, Hawks Cay occupies all of the main island in Duck Key.  Having gone over the bridges we were in residential streets.

Many of the mailboxes have a marine theme. 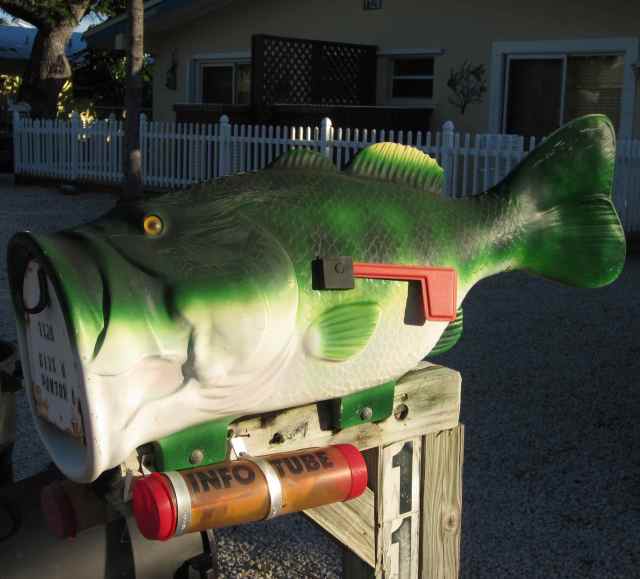 Back to Hawks Cay, there is a large hotel (which we are in) and hundreds of villas which look lovely.  Everywhere is so well maintained, it is a bit like being in a Disney movie.

Many of the villas are dockside where one can moor ones boat.  Everywhere you look it is peaceful and pretty. 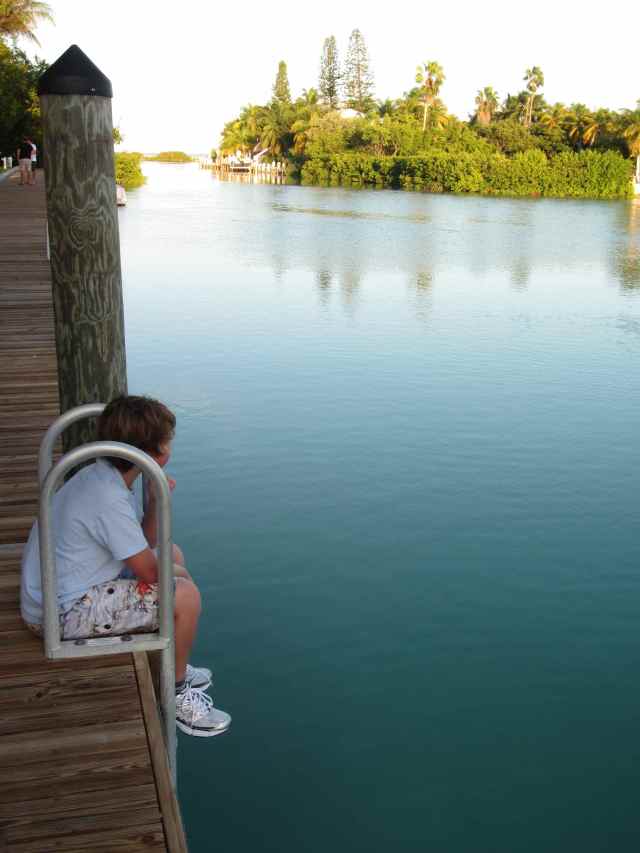 There are so many beautiful boats out there.  Apparently a lot of them belong to wealthy Miami dwellers who own houses and boats here and come down to the Keys for the weekend.  Nice lifestyle. 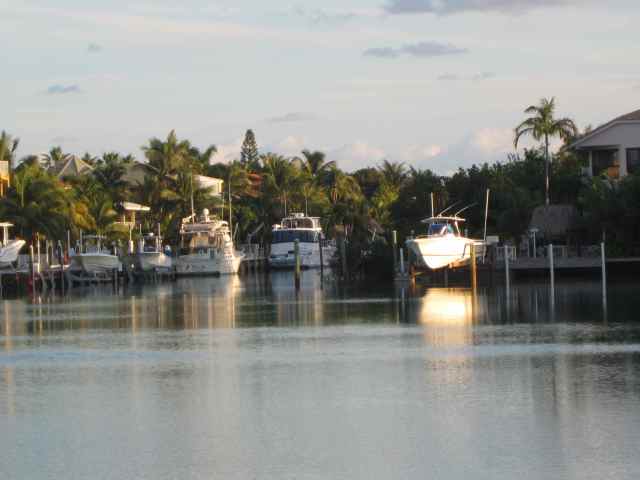 We came across the Indie Club which is the kids centre.  It’s great.  There is a large room for the younger kids where they can be dropped of for a half or whole day of supervised activities.  Older kids have a gigantic room to hang out in, equipped with TVs, Wii, Playstation, a real bar where they can order drinks and snacks, and various games to play.  I am such a bad Mother – we have been here 5 days now and this is the first time I have taken Harvey here.  He loved it.  We had a game of Air Hockey – how dare he beat me!!!  We are not coming here again :-). 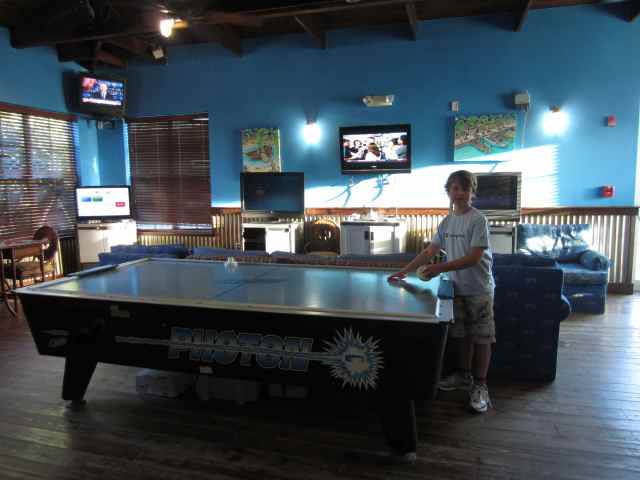 As the sun began to set, Harvey and I returned to the hotel.  I can not get over how calm the water is.  I know this is the marina which is protected but just beyond is the Atlantic Ocean and it has been really rough since we arrived.  Today, all is calm.

Back at the hotel, when Lara returned from the gymn and James returned from twitching we had some crisps and a beer (more bad food choices) before heading out for supper.  The sun set was pretty tonight. 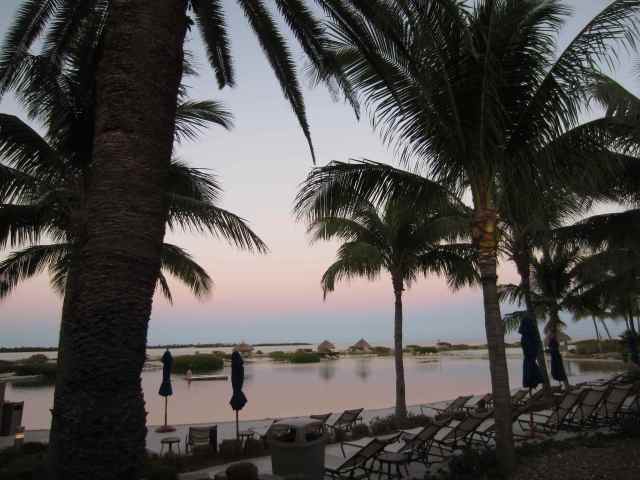 All very pastel and gorgeous. 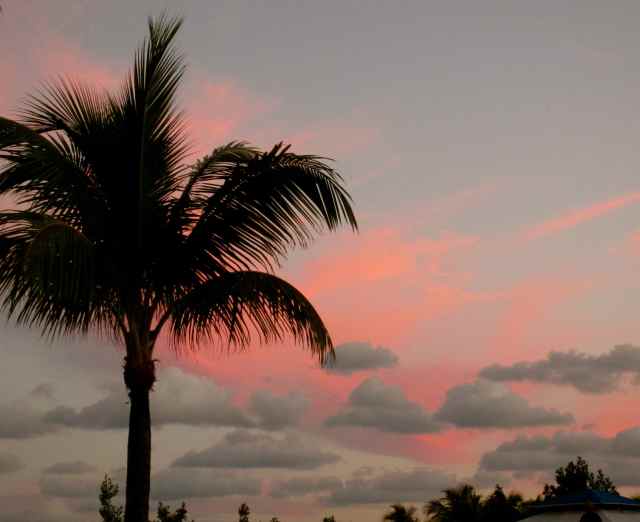 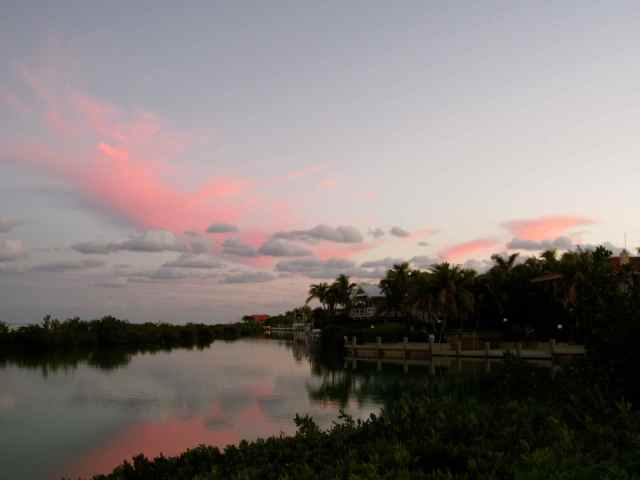 Dinner tonight was disappointing.  We went to a Mexican fish restaurant called Lencho.  This is one of the only times in the Keys we have been to a restaurant without checking Trip Advisor first.  Trip Advisor has been consistently good and we usually rely on it but didn’t tonight which we all regret, except Harvey who enjoyed his chicken Fajitas.  Lara and I both ordered the Taco salad with blackened fish.

The fish was dry and the salad was essentially just lettuce.  There were no chilies, tomato salsa, guacamole or sour cream to jazz it up a bit.  There was about 1 tsp grated cheese, a couple of slices of tomato and an egg with a black ring around the yolk.  It was all so tasteless I had to add salt and pepper to try and liven it up a bit.  The waitress, who was really good, did bring some sour cream for us but it did little to help a very poor meal indeed. 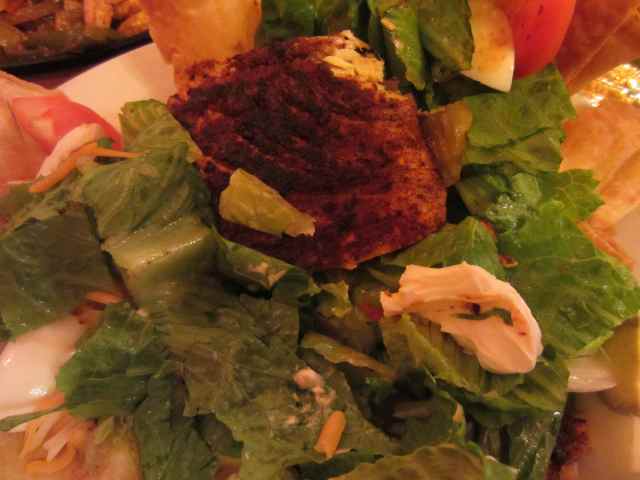 Apart from dinner, we had a very relaxing and enjoyable day in the Keys.

Hi! My name is Zoe and I live in Hastings, East Sussex, with my son Harvey and dog, Milton. I have been fighting the fat for years but this time I am serious. I want to lose weight and gain health. This blog is about how I am changing my lifestyle so I can lose weight but not by just "being on a diet" but by making small changes to our lives so that as I lose weight, I gain health. I want my family to be healthy too and never have to struggle with their weight like I have. In common with many large people, I have gained and lost weight many times over the years. This time, I want to lose it and maintain a healthy low weight. I am interested in eating food that is nutrient dense and delicious and that appeals to children and adults. I do not eat animal products so follow a vegan diet. I try to use locally produced food supplemented with what I can grow myself. I support and try to use local farmers markets and farm shops. Another objective is to add more exercise to our days. It sounds so simple when I write it down :-)
View all posts by Lose Weight and Gain Health →
This entry was posted in Beach, Diet Struggles. Bookmark the permalink.

3 Responses to The Calm After The Storm