Posted on March 9, 2017 by Lose Weight and Gain Health

Here’s a 2 day catch up as I was rather waylaid yesterday evening by a bottle of Prosecco and a lovely friend.

Wednesday was a very tough day and I didn’t get a chance to eat anything until lunch time, by which time I was very hungry so I had a wholemeal Piada ( a wrap) with 30 g humous, mixed lettuces and alfalfa sprouts.  I inhaled that in about 10 seconds.

I spent a little longer enjoying the last portion of the peanut stew, sprinkled with fresh coriander.  I will be making this again as it was so fabulous. 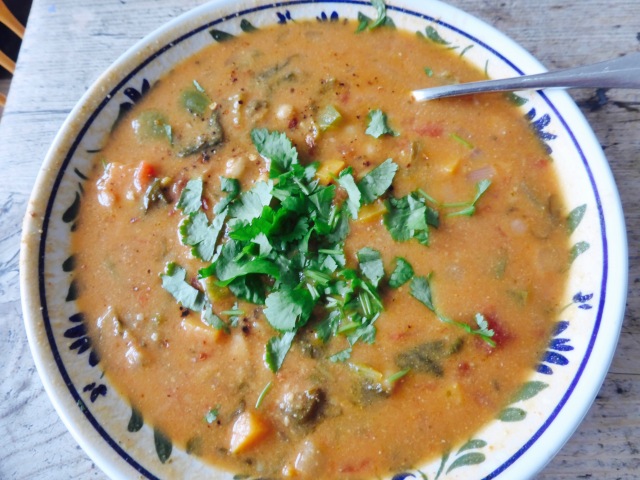 I snacked on 2 bananas in the afternoon and sipped green tea.

We were going out in the evening so supper was very hasty and not at all imaginative.  I chopped up some potatoes, seasoned with salt, pepper and thyme and instead of oil, added a little water to the pan.  Then popped them in a hot oven for about half an hour.

I had the potatoes with more than half a large head of broccoli and half a can of baked beans. It was filling and the broccoli added a lot of nutrients.

I had a wonderful evening at Marion’s.  Oh my, how we can chat!  Colin did well and managed to get a few words in as well but it must be said that we can talk and we did.  There is always so much to discuss and I really appreciated the support and advice I was given.  And thoroughly enjoyed the evening.

I was amazed at the beautiful recipe book Jo Jo created for her vegan sister for Christmas.  I sent some recipes to be included and this was the first time I had seen it and it was fantastic.  In our online way of life, it was lovely to have something to hold and look at on printed paper .  Well done JoJo, this is amazing.

Hmm………, rather a lot of this was consumed.  But on the plus side we did not have anything to eat, such as crisps or other salted and roasted snacks. 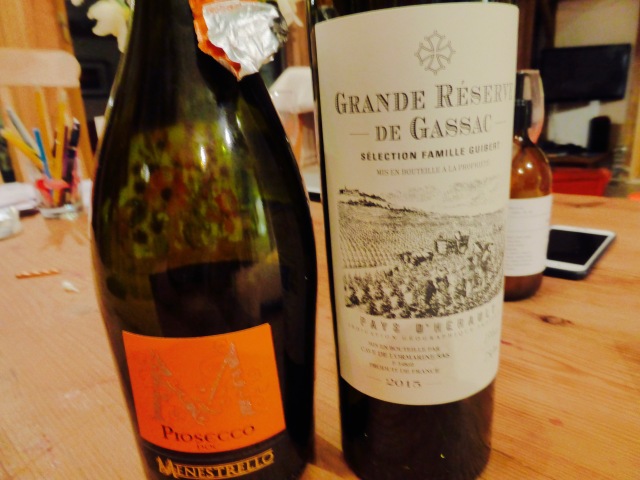 By the time I had tottered over the road and fallen in to bed, I had consumed 1,704 calories, much of which was not plant food!  I only walked 7,723 steps and only had 5 hours and 3 minutes sleep, so not the healthiest of days.  Mind you, not the worst either!

Today was a gorgeous day and I suspect the warmest of the year so far.  The sky was all blue and the sun bright as I walked to the office at 8 am this morning.

Amazingly I didn’t feel bad after too much to drink and not enough sleep so didn’t do what I often do which is to buy a large milky coffee and a big starchy bready something.  I popped in to Waitrose and bought some grapes and coconut and enjoyed them with a large green tea. 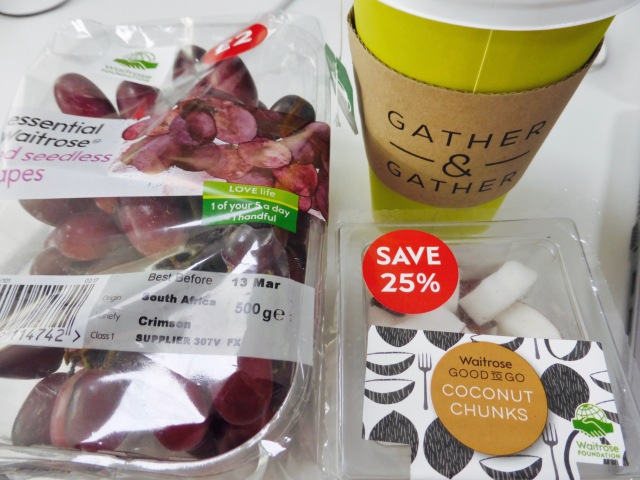 I had a rare lunch out with 2 of my work colleagues because Phoebe, who worked with us last year, came to meet us.  We wandered through the Barbican to Pizza Express. 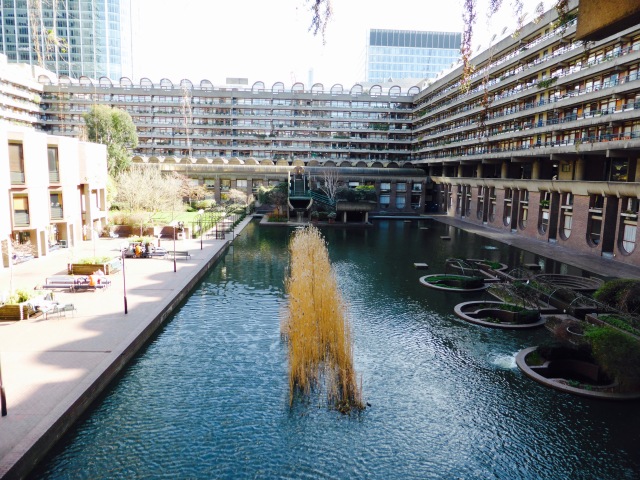 I had the superfood salad as a starter and unusually for me, just did not think about the dressing which was not vegan as it contains egg yolk.  This would have easily been made vegan by just asking for the salad without the dressing and I feel disappointed I didn’t do that.  I ate it all and did enjoy the salad.  It was made with black rice, edamame beans, red quinoa, mung beans, chickpeas, cranberries, pumpkin seeds and kale on a bed of green leaves, peppers and red onion.  It was yummy and I will have it again but without the dressing! 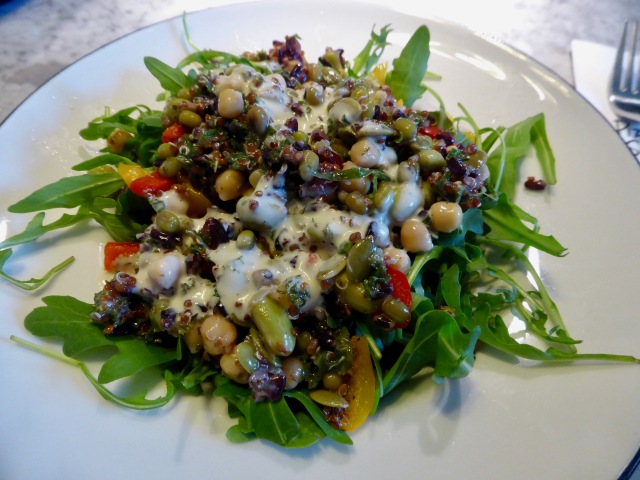 As a main I had the classic Veneziana without the cheese.  So a pizza base with tomato sauce, pine kernels, red onion, capers, black olives and sultanas.  I really enjoyed it but the best part about the lunch was sharing it with Paul, Maya and Phoebe.

Now this was bad but I had to have it.  There is a shop in Euston that sells the best ever samosas and now and again, one of our colleagues pops over to Euston and buys a huge box full, all vegetable samosas, and shares them round the office.  Worth every calorie.

To balance out the excess of the past 24 hours, I had a juice for supper, made with half a pineapple, 2 apples and several sticks of celery. 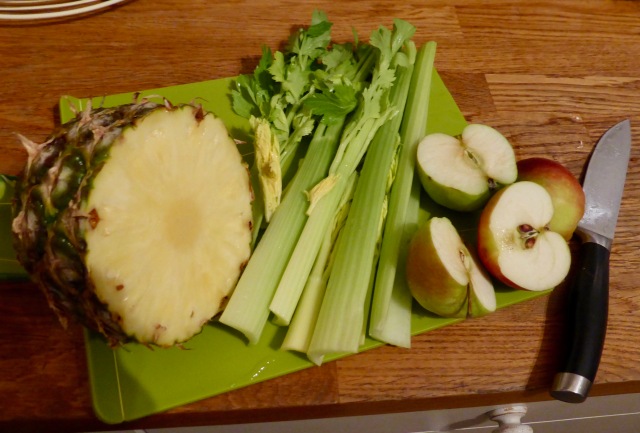 2,142 calories today which is far too many.  I would have had less than that because the calories include over 700 for my pizza but I didn’t have cheese on it and the online calorie look up assumes I did.  I did walk over 11,000 steps so that was good and I will be going to bed earlier tonight than last night!

The vegetable juice I had tonight was very enjoyable, but the prosecco and lovely company last night was much better.