Getting Back On Track

I have eaten too much recently and too much that is not whole food or plant food.  So I have focused on getting back to eating a diet made up of only whole foods and plant foods and then I can begin tracking to eat 80/10/10 again.  Although that is a demanding way of eating, I do believe it is healthy and when I was able to stick with it, it made me feel great.  But when, for whatever reason I struggle with 80/10/10, I have decided to aim for at least whole food and plant foods.

When I work from home I can make a smoothie for breakfast which I really like to have first thing.  This one was amazing.  I was sent a bottle of Plenish’ Cashew M*lk to try.  I didn’t like it on its own as it was too chalky but it was good in a smoothie.  I made it with 2 small bananas, half a punnett of frozen mixed berries, 1 kiwi fruit, a handful of spinach, 3 types of sprouts, purple kale, 5 Medjool dates and 1/4 of a teaspoon of blue-green algae.

Garnished with blueberries and cacao nibs.  I would call this one ‘Purple Power’ as it was purple and made me feel amazing.  Really buzzing and it tasted fantastic.  I will be making this again for sure.

Lunch was a very simple salad eaten with no dressing and made with Romaine lettuce, cherry tomatoes, cucumber, celery and mixed sprouts.  It was warm enough to eat it outside – first outside meal of the year. 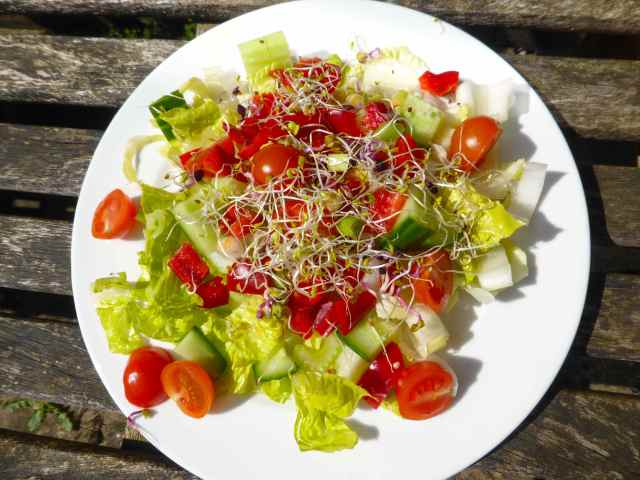 The vegetable garden has this stunning clump of Swiss Chard growing.

The magnolia tree next to the veggie patch is in full bloom.

I left these spring onions in the veggie patch over winter and they have survived and flourished and are now ready for eating which is great. 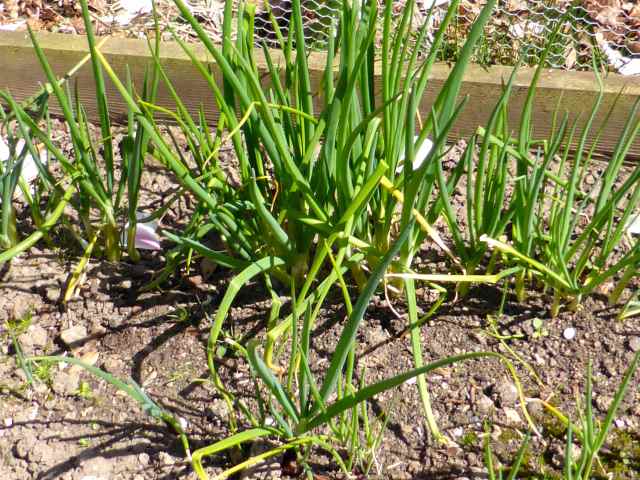 The broad bean seeds I sowed a few weeks ago are doing well.

As are the mange touts.

I snacked on an apple and then some dried fruits followed by more.  I should have had a bigger lunch. 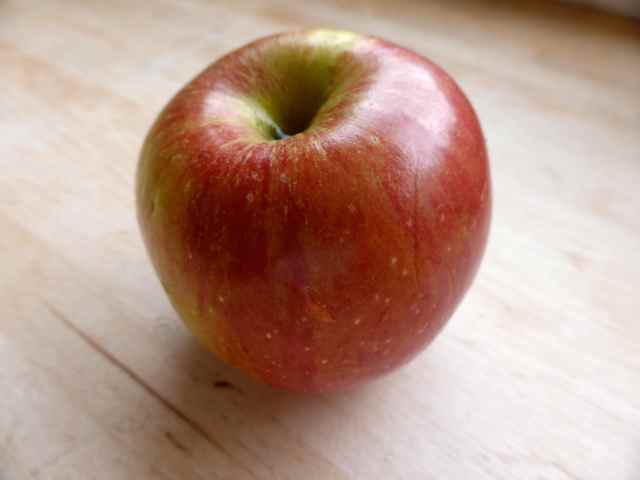 For supper I made ‘Mejadra’ from Ottolenghi’s ‘Jerusalem’.  It is cooked rice and lentils with fried onions.

Place lentils in a small saucepan with plenty of water.  Bring to the boil and cook for 12-15 minutes.  Drain.

Peel and slice the onions thinly and place on a large flat plate. 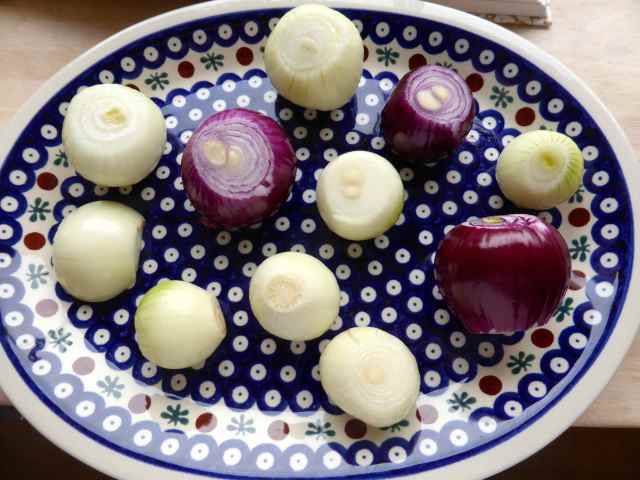 Heat the oil in a medium heavy based saucepan until the onion sizzles when you add it.  Once added, turn the heat down to medium, add 1/3 of the onion and cook 5 – 7 minutes until the onion turns golden brown and crispy.  Watch it to make sure it doesn’t burn and stir occasionally.

Use a mesh spoon and transfer the cooked onion to a colander lined with kitchen paper.  Do the same with the other 2 batches of onion. 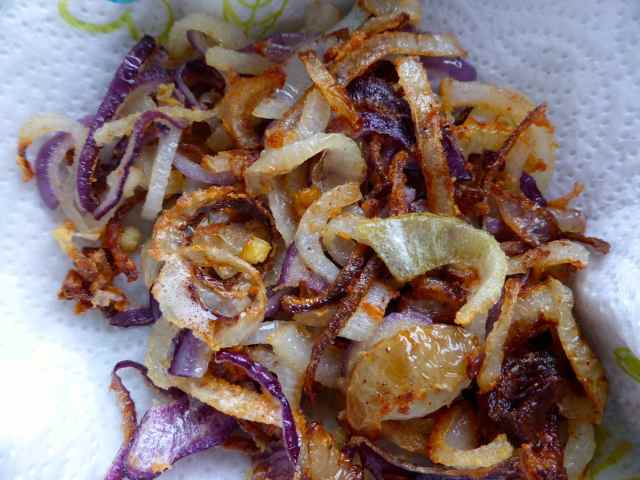 Wipe the saucepan you used for the onion and add the cumin and coriander seeds.  Toast on a medium heat for 1 – 2 minutes.

Add the rice, olive oil, turmeric, allspice, cinammon, sugar, 1/2 a tsp of salt and back pepper.

Stir to coat the rice with the oil and then add the water and cooked lentils.  Bring to the boil, cover with a lid and simmer on a very low heat for 15 minutes.

Remove from the heat and set aside for 10 minutes, with the lid on so the rice continues to cook in the steam.

Add half the onion to the rice and lentils and stir gently with a fork.  Serve topped with the remaining fried onion.

When I was frying the onion I lightly fried some cherry tomatoes because I wanted something juicy with it and this worked really well.  I also added coriander and mint which went perfectly with it. 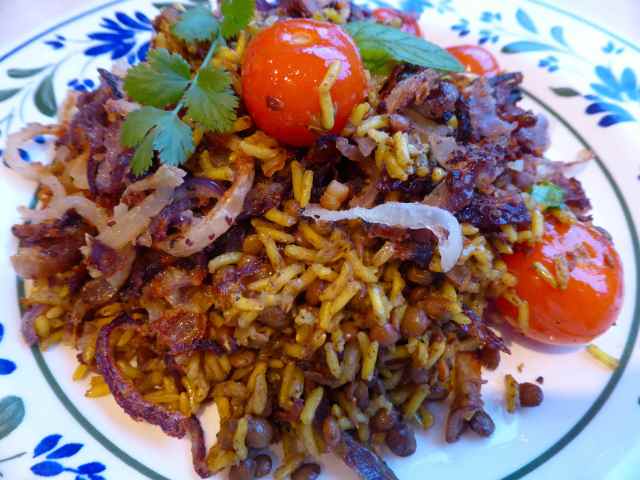 This was delicious.  Far too oily for a woman on a diet but the flavours were amazing and it did keep me away from chocolate, cakes or biscuits.  It was very different to what I usually cook, a bit time consuming and all those onions were literally eye watering to peel but worth it and we both really enjoyed it.

I began the day with some exercise.  I had seen a programme recently about losing weight and the recommended type of exercise to boost metabolism was to do some energetic exercise for 2 minutes (such as jogging, climbing stairs, walking uphill), rest for 1 minute and then repeat 7 times.  So Harvey and I went and did just that.  I haven’t jogged for many years but I did it and was very pleased with myself.  I was also very grateful to Harvey who was very encouraging and kind about my efforts and managed the stopwatch.    So what an awesome way to start the day – go me !!!!

A simple fruit platter for breakfast: watermelon, red grapes, pink grapefruit and orange.  Eaten in the sunshine and every mouthful was a complete pleasure.

I spent lots of time in this part of the garden today. 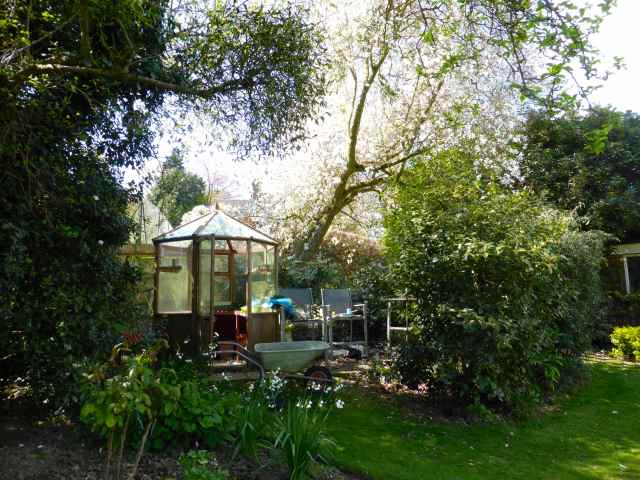 This shady spot under the huge magnolia tree needs a good sweep and tidy up but it serves as my potting shed and is a pleasant place to spend the morning.  The trees have grown so much since we moved here and so this little greenhouse is too shady to use.

This is the lovely greenhouse I had installed last year and which I love as it is so wide.  I sowed seeds this morning for rocket, mizuna, spinach, courgette, purple string beans, cherry tomatoes and plum tomatoes.  I wanted to sow lettuce but have no seeds so I must get some. 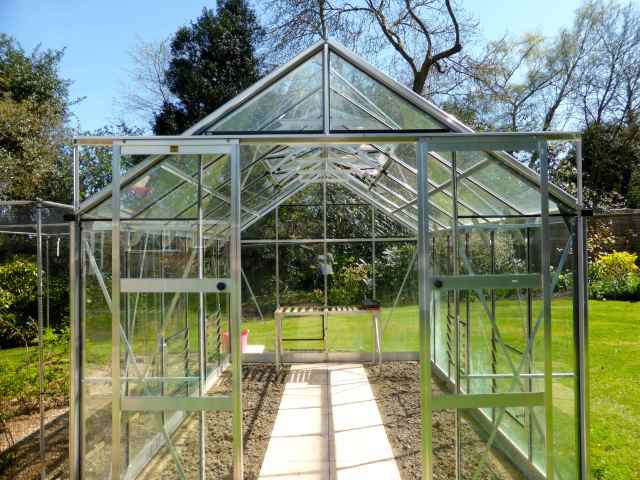 Lunch was a bowl of brown Basmati rice and stir fried veggies, including the swiss chard and spring onions from the garden.  It was so good to be picking veggies from the garden, cooking and eating them – it doesn’t get much fresher than that! 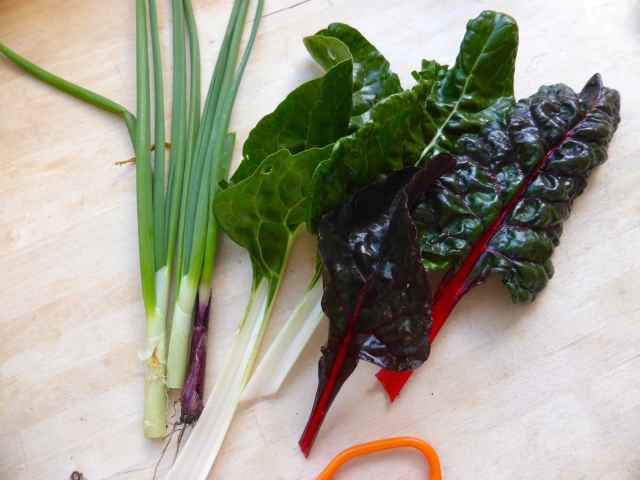 I stir fried in water rather then oil, the following: garlic, broccoli, red pepper, celery, mushrooms plus the swiss chard and spring onions.  Eaten with some soy sauce and chilli flakes.  It was so good.

We sat outside but actually there was a chill nip in the air so we moved in to the greenhouse which was delightfully warm.  I could have stretched out in there and had a snooze it was so warm and lovely.

Harvey thought that sitting in the greenhouse was a strange thing to do but I am thinking it is quite an obvious thing to do and will be doing so again.  A room with a view 🙂 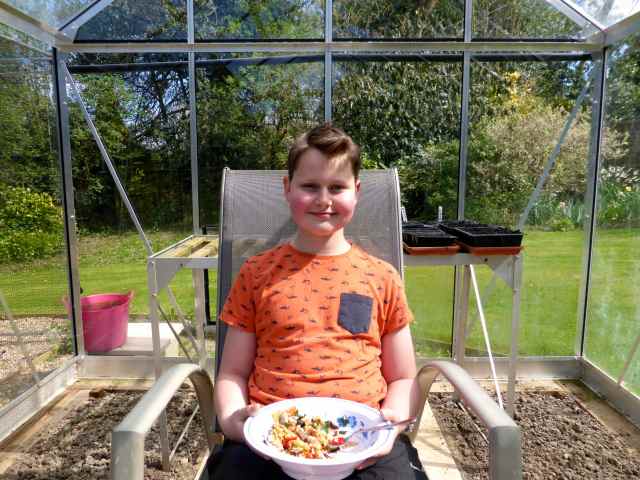 The dogs liked it in there too.

For supper I made an oven cooked ratatouille from Hugh F-W’s ‘Veg Everyday!’ cookbook.  It is really easy to make and tastes amazing.  If you like ratatouille, make this version as it is fantastic.

2 onions ( I only had small red onions so used 7 of them)
2 peppers, cored and deseeded (I used 3 romano red peppers)
400g courgettes ( I didn’t have any so used celery instead)
1 large aubergine (I used 4 small/medium sized ones)
5 tbsp olive oil
salt and pepper

For the tomato sauce
2 tbsp olive oil
3 garlic cloves, peeled
2 x 400g tins chopped plum tomatoes (I used 3 as I like lots of sauce and I used more aubergine than Hugh F-W’s recipe asked for)
1 bay leaf
A large sprig of thyme
A pinch of sugar 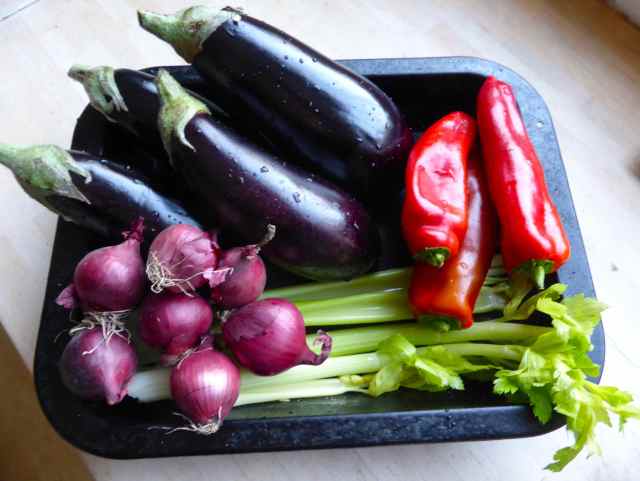 Add olive oil, salt and pepper and toss well together

Roast for 1 to 1 ½ hours, stirring once or twice, until all the vegetables are tender, reduced and starting to brown in places 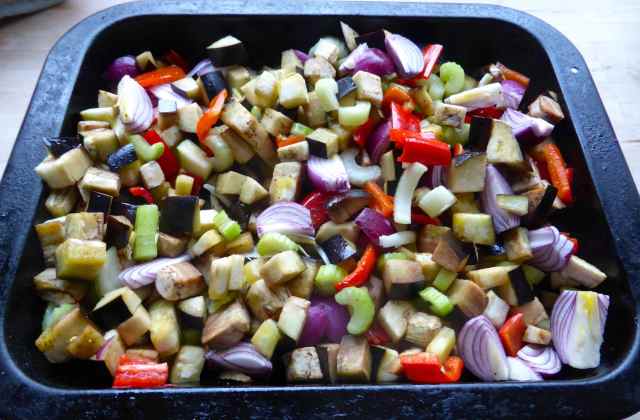 Add the garlic and cook gently for a minute without browning

Add the tomatoes, bay leaf and thyme and cook gently for about 45 minutes, stirring regularly.

When the sauce is thick, add salt, pepper and sugar.

When the vegetables are cooked, mix with the tomato sauce and return to the oven for 10 minutes.

I served mine with a baked sweet potato which I popped in the oven while the ratatouille was cooking.

This was fantastic and exactly what I had been imagining.  It was full of flavour, soft, slightly sweet and fragrant from the thyme I had picked from the garden.  I relished every single mouthful and am looking forward to the next portion.  That is tucked away in the fridge, ready for 2 mid week suppers.

So, 2 pretty good days of eating and exercising.  Too much fat and too many dried fruits but apart from that, it was all whole foods, plant foods and vegan so that is good.

Hi! My name is Zoe and I live in Hastings, East Sussex, with my son Harvey and dog, Milton. I have been fighting the fat for years but this time I am serious. I want to lose weight and gain health. This blog is about how I am changing my lifestyle so I can lose weight but not by just "being on a diet" but by making small changes to our lives so that as I lose weight, I gain health. I want my family to be healthy too and never have to struggle with their weight like I have. In common with many large people, I have gained and lost weight many times over the years. This time, I want to lose it and maintain a healthy low weight. I am interested in eating food that is nutrient dense and delicious and that appeals to children and adults. I do not eat animal products so follow a vegan diet. I try to use locally produced food supplemented with what I can grow myself. I support and try to use local farmers markets and farm shops. Another objective is to add more exercise to our days. It sounds so simple when I write it down :-)
View all posts by Lose Weight and Gain Health →
This entry was posted in Recipe, Uncategorized and tagged Fruit, Gardening, Ratatouille, Salad, Smoothie, Vegan, Vegetable Patch, Veggie Patch. Bookmark the permalink.

3 Responses to Getting Back On Track