Posted on October 29, 2011 by Lose Weight and Gain Health

I had a Perfekt start to the day – I bought a new (for me anyway) granola this week and had 40 g for breakfast with a small carton of fat free yogurt, mango and fig. 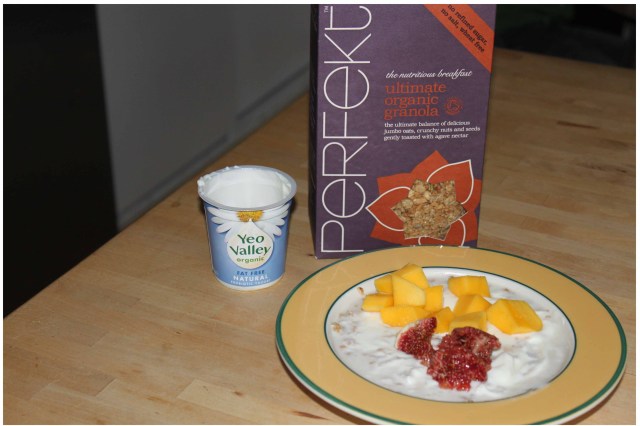 Our boiler is broken so we have no hot water until the new boiler is installed on Tuesday.  After sending an SOS to my neighbours, Sarah replied quickly and Harvey and I headed over for a shower.  It was very kind of her, we enjoyed our first shower in 2 days and came home refreshed.  I must say the shower facilities over the road are lovely.  The bath looked good too so I may try that next time :-).

The rest of the day was spent preparing for a very special visitor arriving from Ireland and I am so excited.  I met Katherina in November 1990 when I joined the company she worked at and we worked together for many years.  We worked with a team of people who became very good friends.  I haven’t seen Katherina for years and I was really excited about her coming to stay with her daughter Aisling and Aisling’s friend Megan.

I needed to clear some space in the fridge for all the food for the evening so I took out lots of little pots of deliciousness that needed using up.

In the morning I had cleared my vegetable patch of the last of its produce.  My sweetcorn was a massive fail this year and this tragic little specimen was all I managed to grow.  I decided it was worth eating though and added it to the pile of things to use up for lunch.  I was pleased to find a beetroot among the weeds in the veggie bed and will roast that in the week. 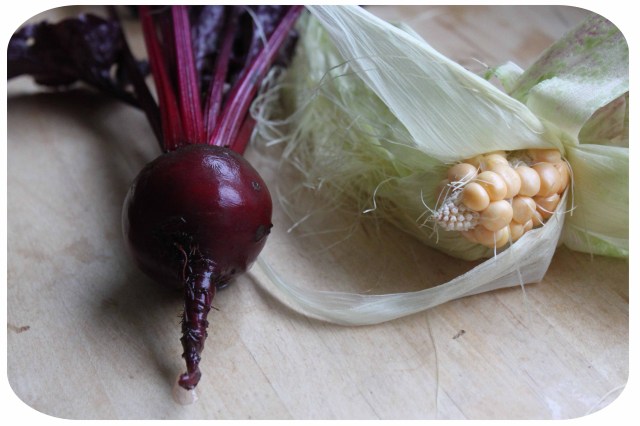 I added some fresh cherry tomatoes and red onion to the green pepper and sweetcorn.

And made egg fried rice with fresh vegetables, with mixed sprouted seeds sprinkled on top and served with a large dollop of avocado dressing.  Lovely. 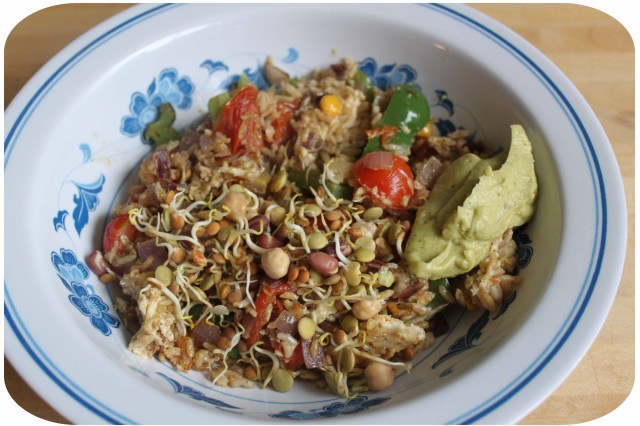 Supper tonight needed to cater for two teenage girls, two boys and five adults.  As well as Katherina’s group, Kath and her family were joining us too as Kath was also part of our merry working gang.

I decided to cook an American supper as it is nearly Halloween.  From a blog I have recently discovered and am enjoying, ‘ Oh She Glows ‘, comes this recipe for “Pumpkin Maple Baked Bean Cornbread Casserole”.  That doesn’t trip off the tongue very easily.  I think I will refer to it as “sweet bean casserole with cornbread topping” in future.  The haricot beans are mixed with pumpkin, raisins, blackstrap molasses, maple syrup and various other condiments.

I mixed all the ingredients together and cooked them for about 15 minutes.

and then left them until I was ready to mix the topping and cook it.  There was a mixed reaction to this dish; some disliked it but others enjoyed it.  I enjoyed it but it was too sweet so I would tweak the recipe if I made it again. 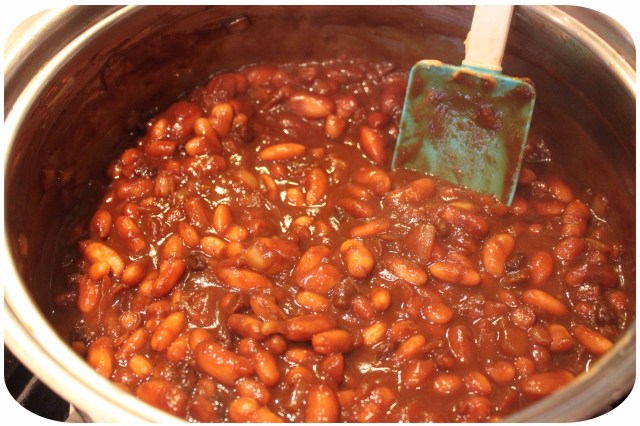 Also on the menu was some of the most delicious but calorific and unhealthy bars in the world.  Imagine salted peanuts, chocolate and Crunchie bars mixed together.  Divine.  Google “Nigella” and “sweet salty crunchy” and you will find various recipes or watch Nigella herself making them on this You Tube clip : Sweet and Salty Crunch Bars .  They are so simple a child can make them.  Oh, he did!  Thanks Harvey. 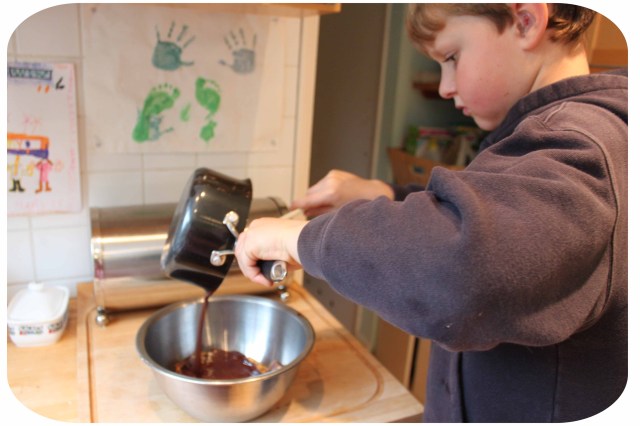 They are totally moreish and irresistible and as an occasional treat, worth every point/calorie.

Also on the menu was BBQ chicken, sausages, salad leaves from the garden and coleslaw.

Finally our visitors arrived, the champagne corks popped and we began a fun evening of reminiscing and catching up with each other.

It was wonderful to have supper with Megan, Aisling and Katherina. 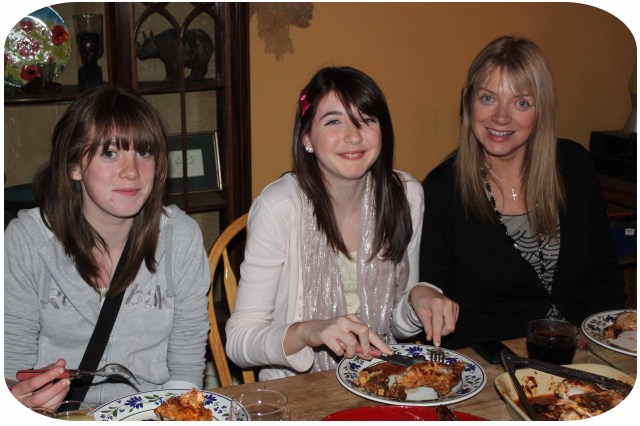 The little fellas at the end had fun too.  But refused to smile for the camera. 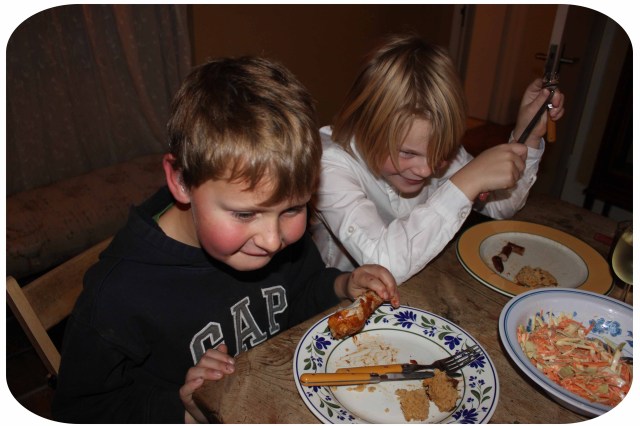 I forgot about photographing my plate as I was far more interested in the fabulous company around my table rather than the food upon it.  Suffice to say, great quantities of food and drink were consumed,  many tales were told and we had a very long and very lovely night together.  Don’t leave it so long Katherina before coming back, please.

Hi! My name is Zoe and I live in Hastings, East Sussex, with my son Harvey and dog, Milton. I have been fighting the fat for years but this time I am serious. I want to lose weight and gain health. This blog is about how I am changing my lifestyle so I can lose weight but not by just "being on a diet" but by making small changes to our lives so that as I lose weight, I gain health. I want my family to be healthy too and never have to struggle with their weight like I have. In common with many large people, I have gained and lost weight many times over the years. This time, I want to lose it and maintain a healthy low weight. I am interested in eating food that is nutrient dense and delicious and that appeals to children and adults. I do not eat animal products so follow a vegan diet. I try to use locally produced food supplemented with what I can grow myself. I support and try to use local farmers markets and farm shops. Another objective is to add more exercise to our days. It sounds so simple when I write it down :-)
View all posts by Lose Weight and Gain Health →
This entry was posted in Grow Your Own, Recipe. Bookmark the permalink.

6 Responses to EiRE She Comes