Canter Down to Camber

Posted on October 23, 2011 by Lose Weight and Gain Health

Today did not turn out as planned.  The plan was to watch the rugby world cup final, go home and do some chores including phone calls and then Harvey was having a friend round for a sleepover.  What really happened was a bit different.

The day did start with the rugby.  We went to the rugby club and watched New Zealand beat France in a very close rugby match.  I prefer a few more trys but I was happy with the result.  It was really fun watching it with such a large crowd of people as you get a good atmosphere.  And there was such a good mix of kids and adults enjoying the match, it was great.  Many of the men got stuck in to the beer and roared and cheered as trys were imminent.  There was a group of youngsters in the middle with squeaky voices (relative to the deep bellows from the men) who enjoyed making up little rhymes and chants which they sang and clapped along to in support of the All Blacks.  I have many dear friends either in NZ or from NZ so was really pleased with the result.  And I thought of them all, on the other side of the word and imagined the excitement in their homes.

I had overslept a little so instead of eating at home, I took breakfast to eat during the match.  I felt a little out of place, eating my Bircher muesli while all around me munched on bacon butties and swilled beer.  I felt relieved it was dark in the clubhouse 🙂

Bircher Muesli with Pumpkin and Apple

Last night’s Bircher brew was made up of; 1/2 a cup of oats, 1 cup of almond milk, 3 tbsp of pumpkin puree, 2 apples which I picked from the tree, peeled, de-cored and then steamed with some cinnamon, plus 1 tbsp of Chia seeds.  I left the mix in the fridge overnight in the blender jug and then blitzed until it was smooth.  The idea of blending a Bircher muesli came from a Kath Eats recipe that I read a while ago and decided to try last night/this morning.  The consistency was reminiscent of wallpaper paste but it tasted lovely.  And most importantly, kept me full until 7pm which is when I next ate!

After the World Cup Final I watched Harvey’s training and match in the warm sunshine.  It was a very pleasant way to spend a Sunday morning.  We went home and I got a message to say Harvey’s friend needed to postpone by 24 hours which meant I had a free afternoon and evening.  Within minutes I received a phone call from my dear friend Sally to say she was taking her daughter and pony to Camber Sands so did I want to join her for a dog walk?  Yes please!  I couldn’t persuade my men folk to join me so went alone with the dogs.  It was lunch time but there was no time to eat so I grabbed an apple and hopped in the car for the 30 minute drive.

Hellooooo Camber Sands, you beautiful beach, with your miles of golden sands, backed by sand dunes.

Plus the occasional gorgeous house or beach cafe but no other developments.

Hello Sally, Alex and Pickles!  So good to see you all and such an unexpected pleasure for the afternoon 🙂 🙂 :-). 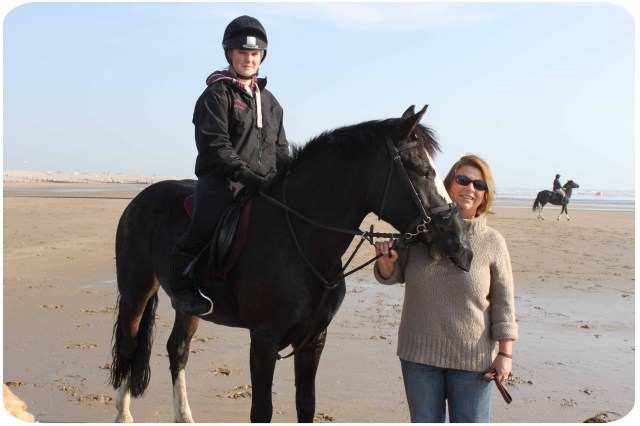 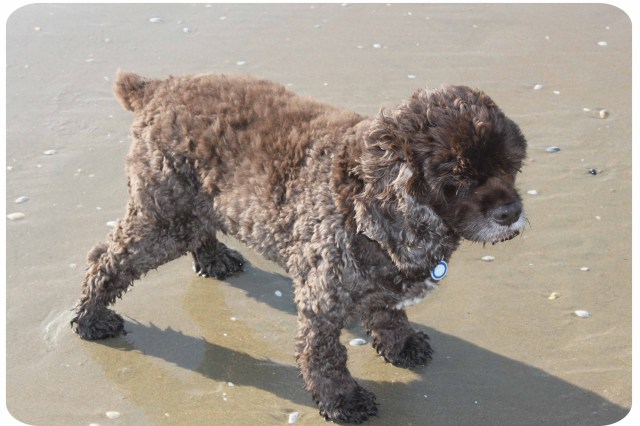 I am no horse rider and actually find horses a little too big and rather scarey.  But this looked like fun and I would have enjoyed galloping down the beach on horseback.

Girls and ponies on a beach.  What an amazing time they all had.  So did we, standing on the beautiful beach with endless entertainment all around us, chatting away.  It was wonderful.

I have never seen Alex ride before, apart from on countless videos on You Tube.  It was impressive stuff. 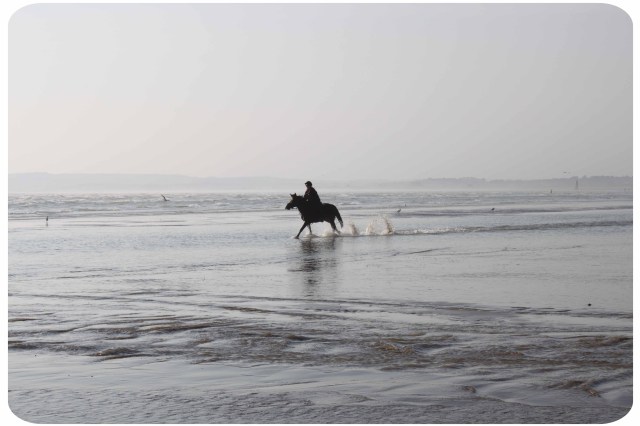 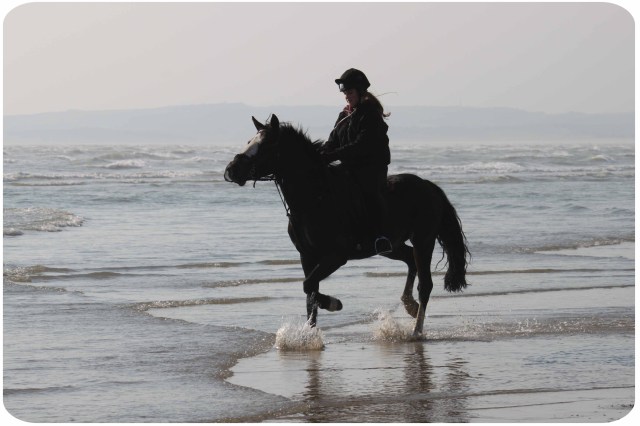 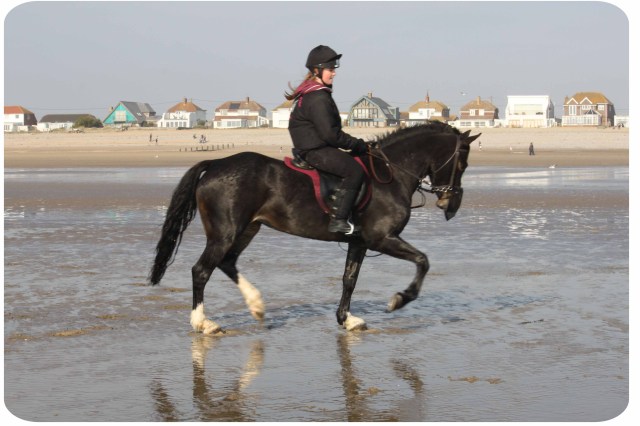 They look so gorgeous together.

I am so glad you called Sally 🙂 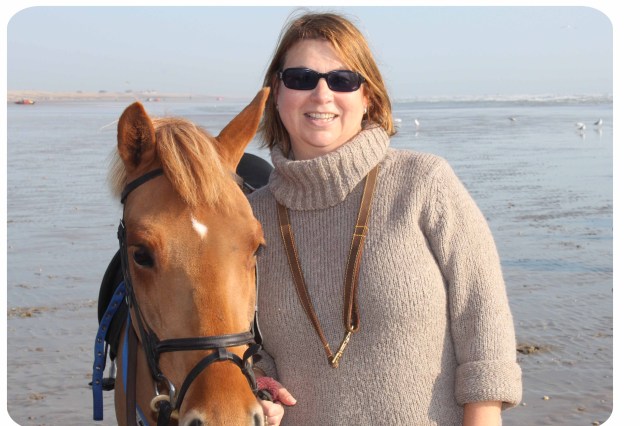 Time flew, as it always does when you are having such a lovely time, and the girls and ponies re-grouped and cantered off, back towards their horse boxes and then home.

Sally had time to come back for a cuppa and I got dinner in the oven.  I had such a lovely day I forgot I had missed lunch altogether!  It was 5 pm so too late for lunch but I was starving but I managed to resist snacking on anything.  So pleased with myself.

Followed by 100 g Greek yogurt with 1 tsp honey.  The honey is a raw one by Green Bay called ‘Raw and Rare Fir of Vytina’ and tastes divine.

So an unexpected day.  A wonderful day, watching the cantering at Camber.

Hi! My name is Zoe and I live in Hastings, East Sussex, with my son Harvey and dog, Milton. I have been fighting the fat for years but this time I am serious. I want to lose weight and gain health. This blog is about how I am changing my lifestyle so I can lose weight but not by just "being on a diet" but by making small changes to our lives so that as I lose weight, I gain health. I want my family to be healthy too and never have to struggle with their weight like I have. In common with many large people, I have gained and lost weight many times over the years. This time, I want to lose it and maintain a healthy low weight. I am interested in eating food that is nutrient dense and delicious and that appeals to children and adults. I do not eat animal products so follow a vegan diet. I try to use locally produced food supplemented with what I can grow myself. I support and try to use local farmers markets and farm shops. Another objective is to add more exercise to our days. It sounds so simple when I write it down :-)
View all posts by Lose Weight and Gain Health →
This entry was posted in Beach and tagged Asparagus, Broccoli, Honey, Pomegranate, Raspberries, Strawberries. Bookmark the permalink.

2 Responses to Canter Down to Camber