Old Friends, Art and Food in London and a Country Park

Posted on October 8, 2017 by Lose Weight and Gain Health

What a weekend that was !  I had the absolute pleasure of seeing my oldest friends this weekend, as in, those I have known the longest, rather then those who are the most advanced in years.

The weekend’s fun began on Friday night in a pub near Blackfriars Bridge where I met Jeremy and Laura, 2 lovely people I was at University with.  We had dinner at Sea Container in the Mondrian which is on Southbank.  It was delicious food in very opulent surroundings and with very posh loos.  Delightful company too.

Southbank is great fun in the evenings; we saw people juggling wth fire sticks, admired the views of London and watched the skateboarders as we walked back to Waterloo.  I stayed at Laura’s and it was a relief to not have to trek back to the South coast after a fun evening out. 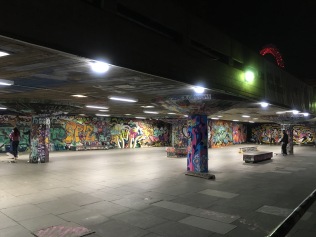 On Saturday I met Lara at Waterloo and we had breakfast together at Le Pain Quotidien. I had avocado on toast and a very large (and very delicious) soya milk latte.

Our next destination was Tate Modern where we met up with Harvey and some of my schoolfriends and their children.  We had an 18th and a 21st to celebrate and chose to meet at Tate Modern to kick of the birthday celebrations. 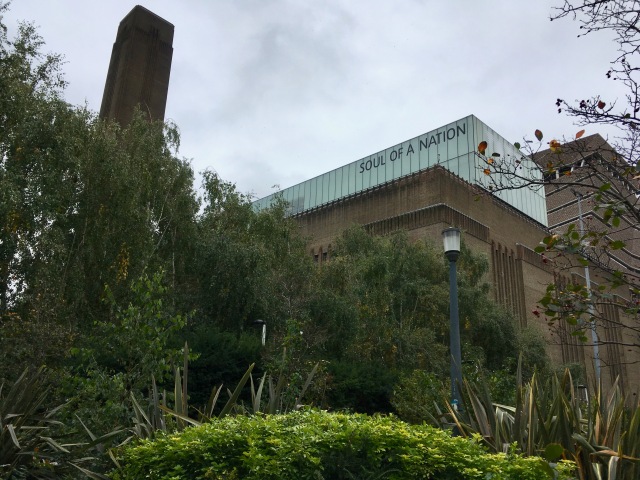 Tate Modern had an adult playground (Superflex) in the Turbine Hall which was fun and spectacular, as everything in that huge space tends to be.  Lara, Harvey and I had a go on one of the many huge swings they had installed. 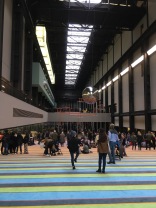 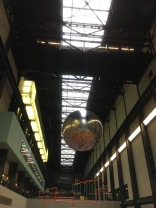 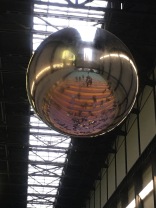 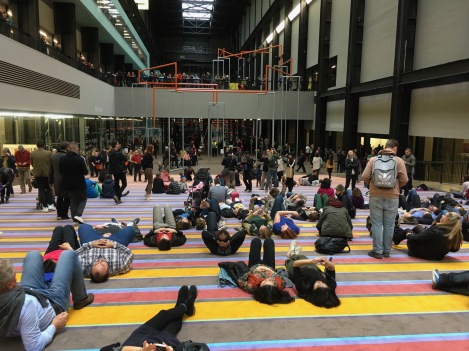 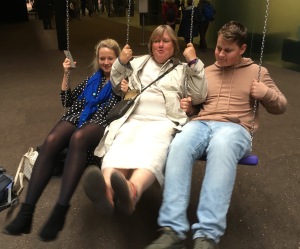 We looked at some of the exhibitions.  My favourite was a series of photographs depicting activities in America we may not be aware of.  I have respected the artists copyright and not taken photos of their work but instead I photographed the description alongside the pictures I most enjoyed. 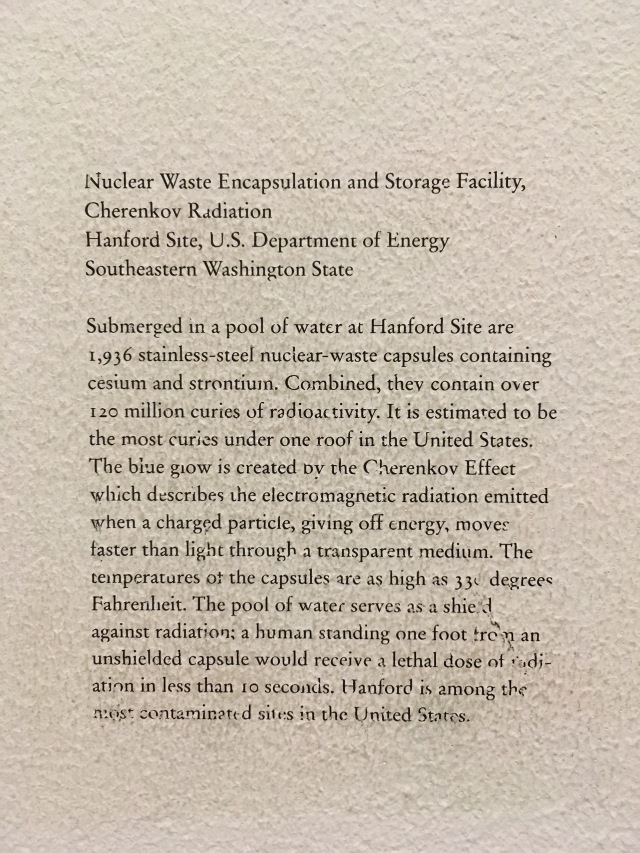 I found these and other pictures fascinating.

We then set off for Granary Square at King’s Cross.  We walked over the Millennium Bridge to get to the tube on the North side of the river. 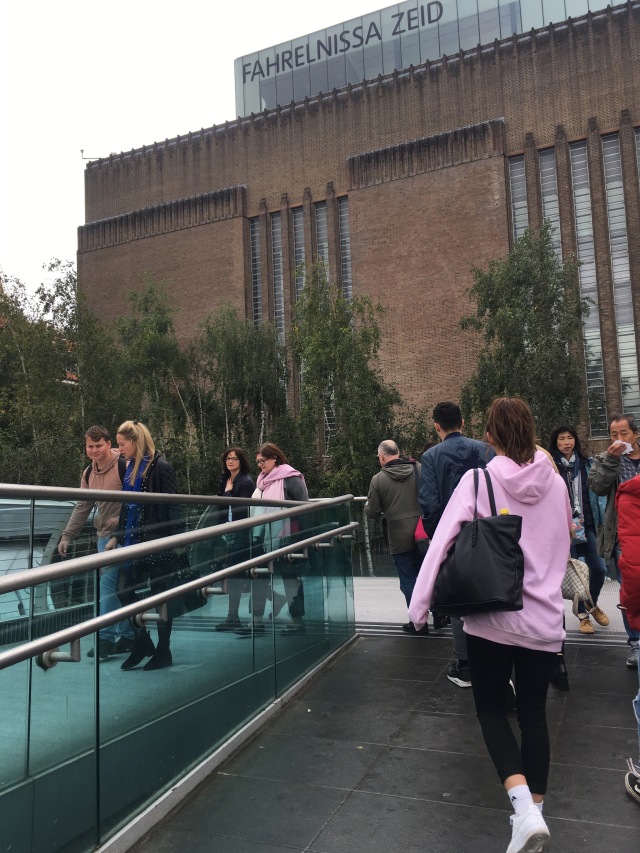 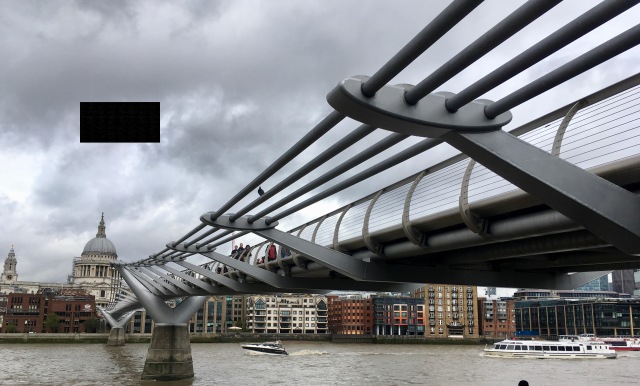 We had lunch at Dishoom, my favourite Indian restaurant.  There were 13 of us for lunch and it was was great fun.

This was not a lunch to help with my weight loss as we had cocktails (gimlets and Pimms) and fried foods but it was worth it.  I had gunpowder potatoes and green veg as my main which was delicious. 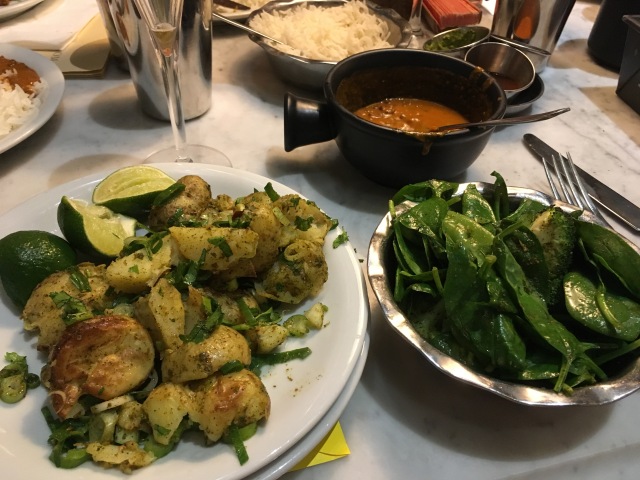 The food in Dishoom is amazing and I particularly like the building and decor at the Kings Cross branch. 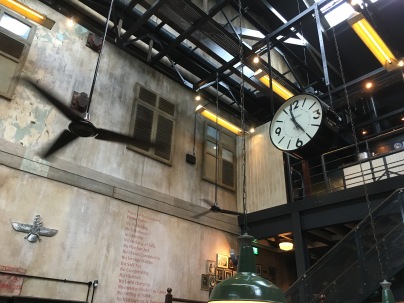 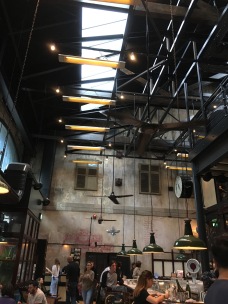 I am so happy I still have my friends from school, and one of my first jobs, in my life.  We have known each other’s children all their lives and it has been lovely seeing them grow in to the delightful young adults they now are. 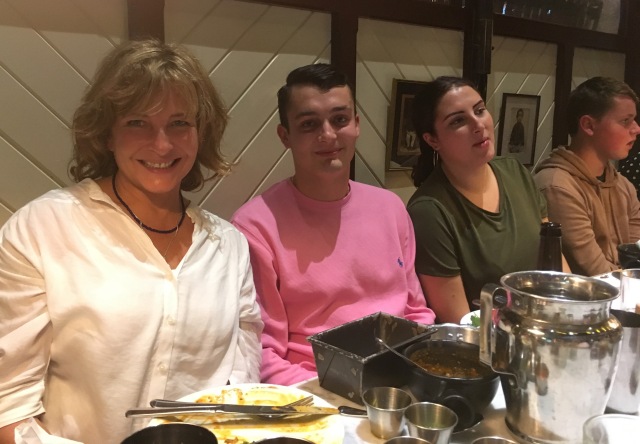 I think we have done rather well between us.

I did eat too much on Saturday but at least I managed to walk a lot; nearly 15,000 steps.

This morning I woke up to blue skies and as the forecast was not great for the afternoon, I took Harvey and Milton up to the Country Park first thing. 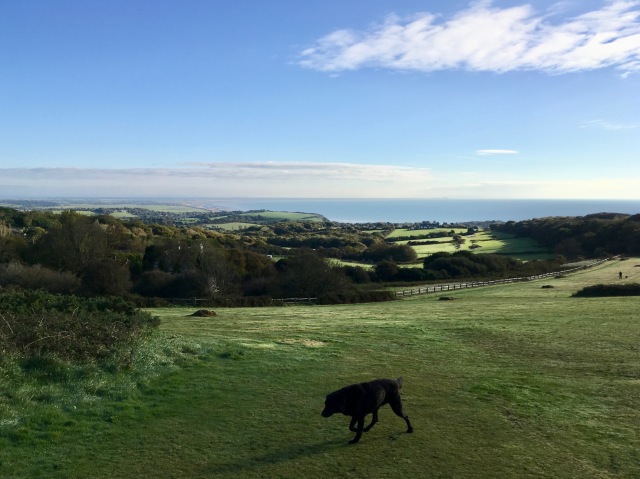 The views from the park are spectacular.

This was Harvey’s first trip and he loved it too. 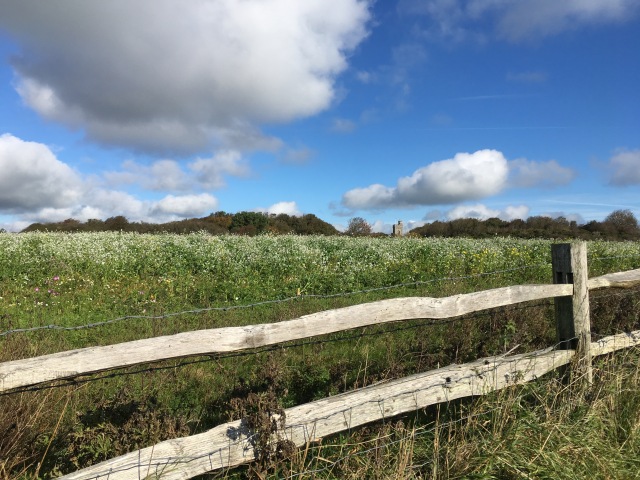 I had grapes and cups of tea for breakfast and a roast for lunch made with Linda McCartney red onion sausages and vegan gravy.  Served with lots of vegetables. 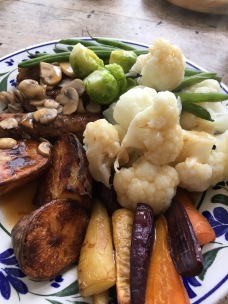 I did then have a spectacularly lazy day but I had walked over 10,000 steps so it could have been worse.  Supper was a pizza and pint of stout in the Imperial which was tasty but not diet friendly so I need to be really good for the rest of the week.

I lost 2.5 pounds this week which is 13.5 in total and I really want to have lost a stone by Friday.