Harvey and I had a lazyish day at home on Saturday which was very pleasant.  It was still so warm and sunny in the late afternoon I suggested we headed for the coast so we could go for a walk along the seafront in Hastings, have supper and watch the sunset.  That is what we did.  We parked near the pier as by good fortune, street parking restrictions are lifted at 6pm which was exactly when we got there.

I walked and Harvey cycled along to the far end of Hastings, Rock-A-Nore.  The beach had fewer people on it than I expected.

These two were having fun on their paddle boards; they paddled out and then raced back in on the waves.  I really fancy trying that and sea kayaking. 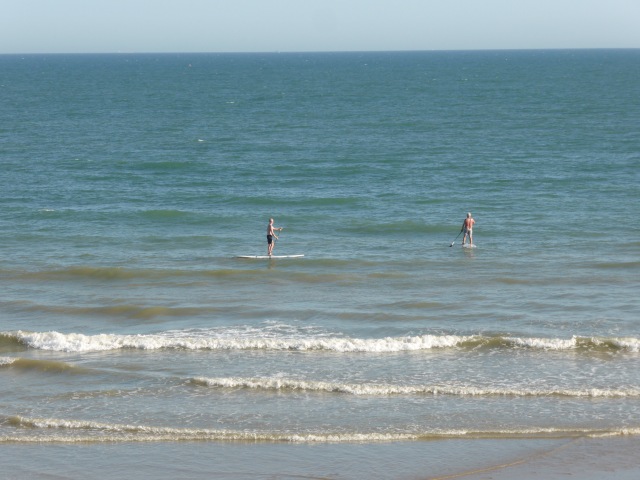 It was a very pleasant stroll and cycle. 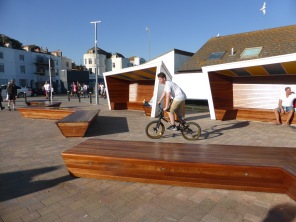 The seafront near the boating lake and mini golf was full of people enjoying themselves and making the most of this fantastic weather we are having.

As we approached Rock-A-Nore we came to the business end of the beach, where the fishing shacks are which sell fresh fish, the beach with the boats on it and the fishing net huts.

Hastings really is a photographers dream.  I must dust off the large camera and come back as it is so picturesque. 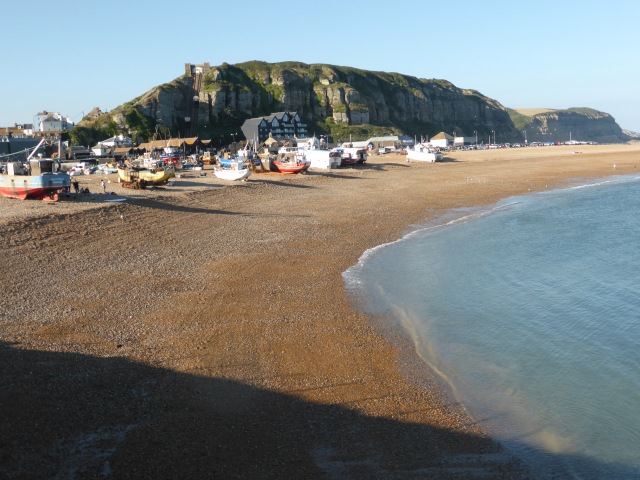 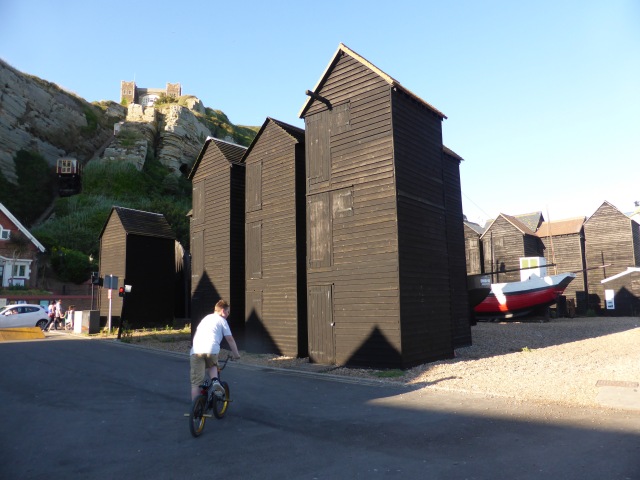 This is the coastline beyond Rock-A-Nore. 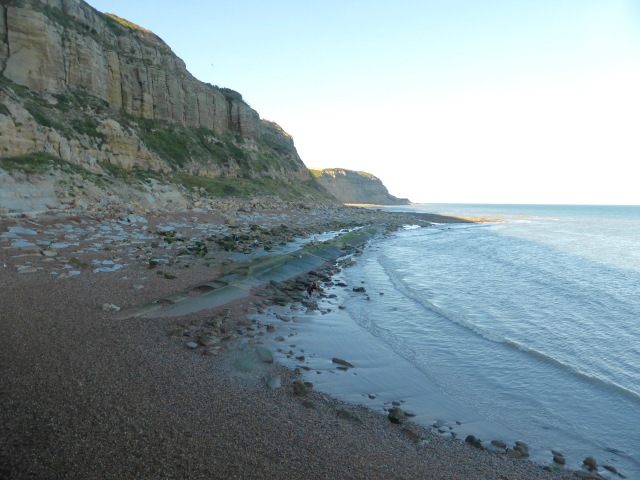 The end of the road for us so we about turned in the direction of the pier for a cold drink.

I love the lines of the pier and how they reflect in the wet sand.

It was such a beautiful evening. 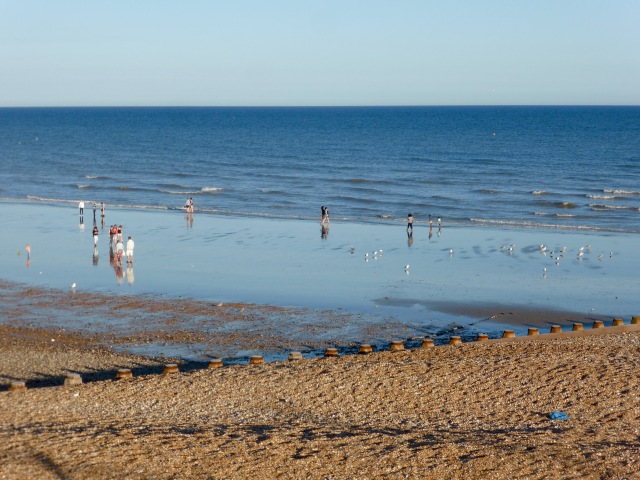 A cold beer drink and crisps and peanuts were just the thing.  The only negative aspect of the evening was the ghastly rap style music being blasted out by a ‘DJ’ on the pier.  It seemed an unusual choice of music for a crowd of mainly families or middle aged people. 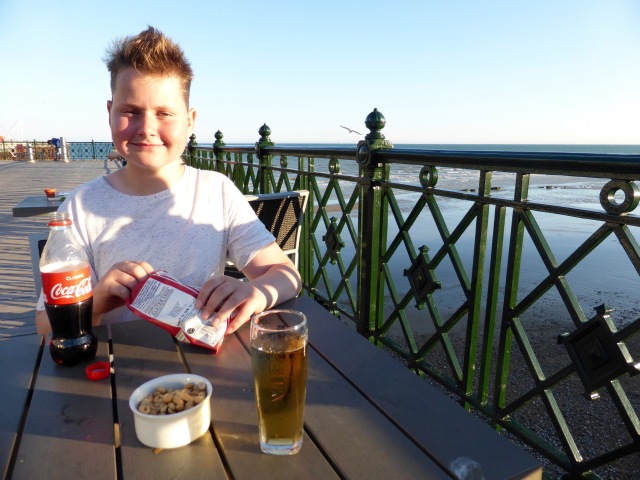 Harvey chose to eat pizza which meant we had to walk back towards the Old Town to find a restaurant which sold pizzas and was on the sea front and had a table for us.  We ate in Bella Napoli at Pelham Crescent.   It was very good value; we nibbled on bread with Balsamic and olives, I had a pizza and Harvey a Calzone plus a glass of wine came to £24 which I think is really good.  The portions were so large we had to take half of it home so that’s lunch sorted!

We had a lovely evening in Hastings and thanks to all the walking, my step count for the day was over 17,000 which is really good.  Not enough to justify the pizza and bread though 😦

Today was a gardening day.  I could always go to the beach but I have a large garden and it needed attention today so I stayed at home.

Much of the garden looks really good, thanks to the weekly endeavours of my gardener, Adrian but certain bits, like the pots and veggie garden are all mine. 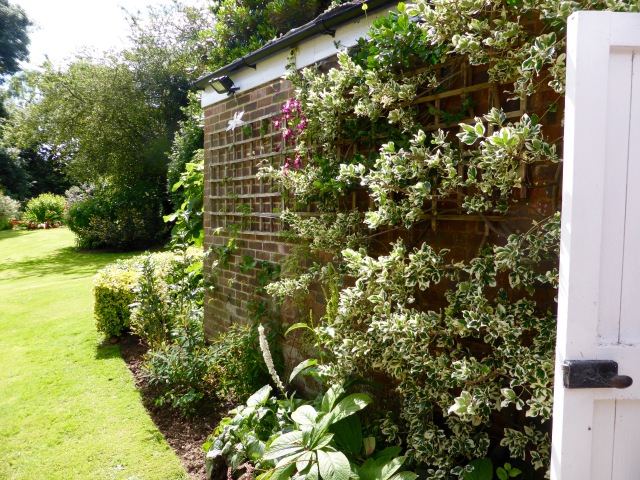 I worked on the pots on the patio which were a mess and planted up a flower bed next to the veggie patch.  I haven’t been so inspired to grow as many veggies as usual as I was expecting to have moved.  Rather than look at an empty bed, I bought some flowers and planted them out.

I only have tomatoes and squash in the greenhouse this year and they are doing really well.  We have already eaten some tomatoes which is the earliest I have ever had any.

There are so many trusses on each plant. 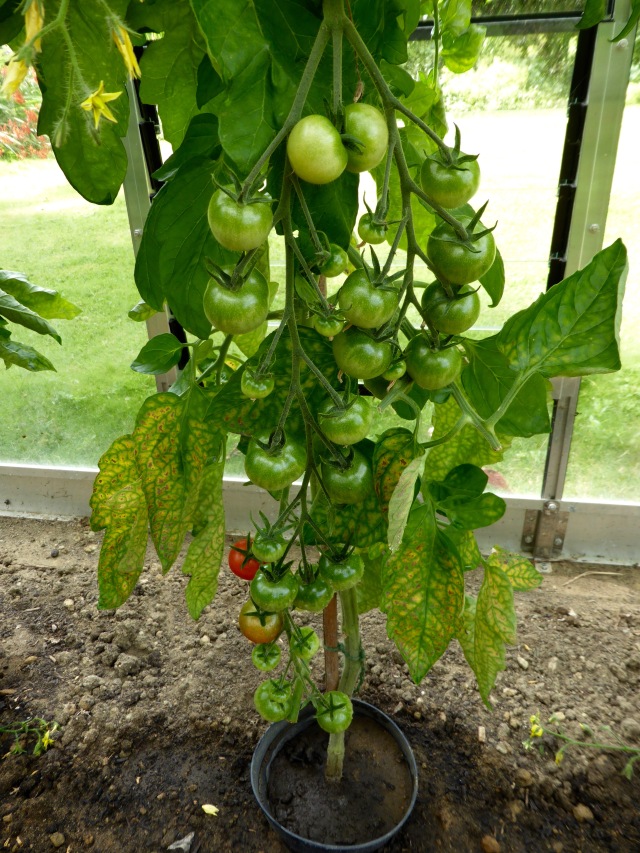 I enjoyed being outside, gardening and was inspired by all the plants in the garden to make a juice for breakfast.  I picked some rainbow chard and juiced it with half a pineapple, an orange, a kiwi and red pepper and then blended it with half an avocado. 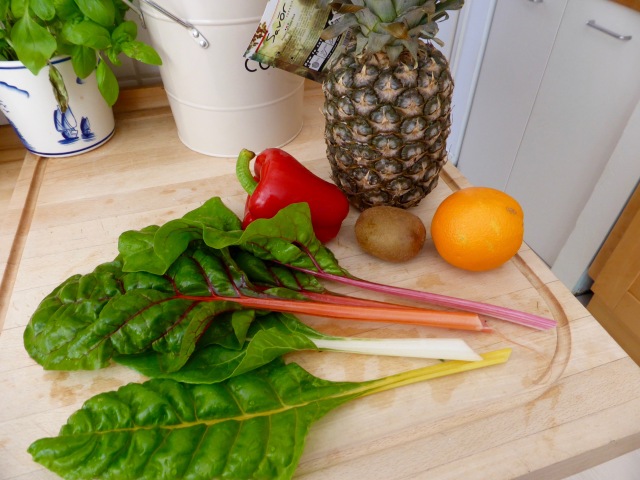 I was aiming for a green juice but it was more brown than green.   It tasted good though.

For supper I picked lots of peas and spent a pleasant time, sitting in the garden, shucking them.

I also picked all the raspberries I could find and some rhubarb and made a crumble.  I haven’t made a ‘proper’ pudding for ages and thought it was about time I did.

It was cooler today than yesterday with a pleasant breeze and in the afternoon we enjoyed a walk over the road in the woods.

It is so lush and green in the woods at the moment.

Look how high the ferns are?  They are huge, almost tropical.

We ate supper in the garden.

As we were having a pudding we had a light supper; stir fried vegetables (peas and chard from the garden) with smoked tofu with sesame seeds and almonds. 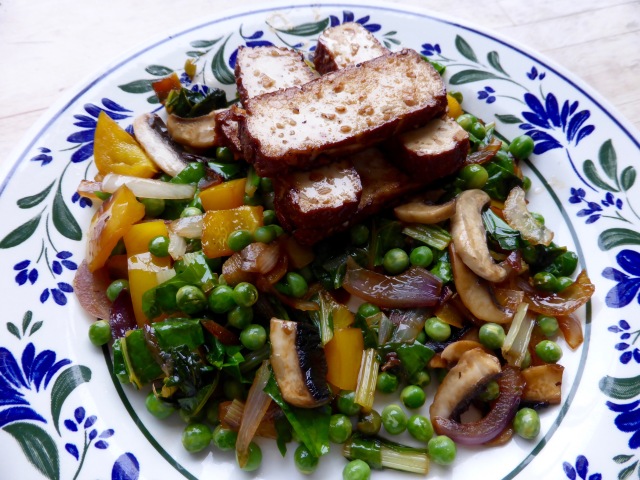 The crumble was delicious.  I had about 5 cups of fruit which I placed in an ovenproof dish I had coated lightly with coconut oil.  I added 3 tbsp brown sugar.  I made a topping by blitzing together 1 cup of oats, half a cup of wholewheat flour, half a cup of pecan nuts, 1/4 cup of brown sugar, a pinch of salt and 4 tbsp vegan spread.  Baked in the oven at 180 degrees for 45 minutes.  Served with vegan custard.  We both really enjoyed it and have another portion to look forward to tomorrow. 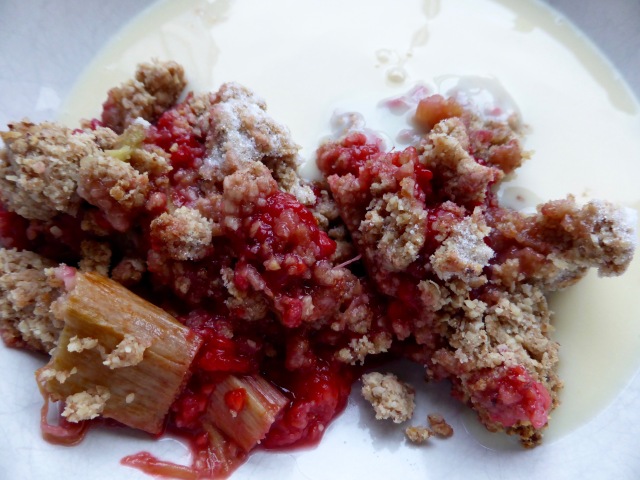 Hi! My name is Zoe and I live in Hastings, East Sussex, with my son Harvey and dog, Milton. I have been fighting the fat for years but this time I am serious. I want to lose weight and gain health. This blog is about how I am changing my lifestyle so I can lose weight but not by just "being on a diet" but by making small changes to our lives so that as I lose weight, I gain health. I want my family to be healthy too and never have to struggle with their weight like I have. In common with many large people, I have gained and lost weight many times over the years. This time, I want to lose it and maintain a healthy low weight. I am interested in eating food that is nutrient dense and delicious and that appeals to children and adults. I do not eat animal products so follow a vegan diet. I try to use locally produced food supplemented with what I can grow myself. I support and try to use local farmers markets and farm shops. Another objective is to add more exercise to our days. It sounds so simple when I write it down :-)
View all posts by Lose Weight and Gain Health →
This entry was posted in Beach, Grow Your Own, Recipe, Uncategorized and tagged Gardening, Hastings, Vegetable Patch. Bookmark the permalink.