It was sunny today with blue skies and we made the most of it by hiring bikes and cycling around.  We have reflected over supper, that Malmo is a fantastic city, it would be an easy place to live and we all have sore bums so need to cycle more!

Our first stop was at an incredible building called the ‘Turning Torso’.  This is Scandinavia’s tallest building (190 metres high) and it twists 90  degrees from the base to the top. 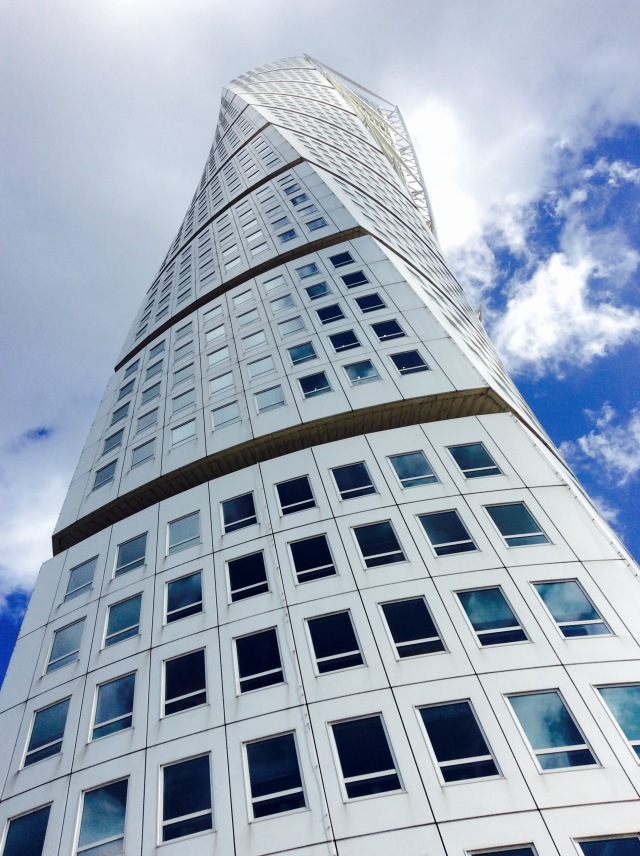 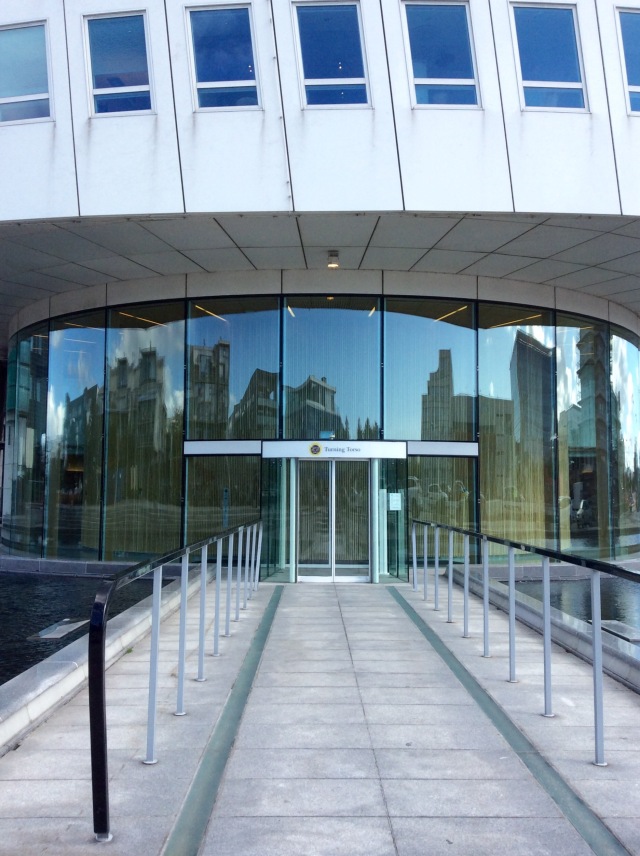 The architecture around here is fascinating and I loved it.  Some was quirky.

Most was very aesthetically pleasing. 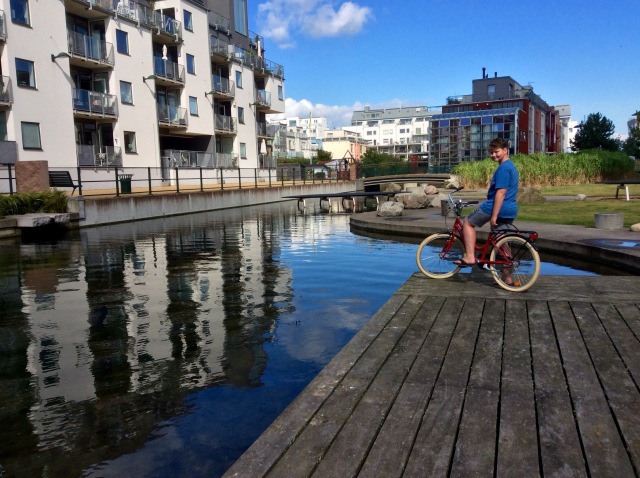 This area is known as the Western Harbour and is a popular residential district and no wonder why.  The buildings are modern, filled with light and laid out around open spaces. 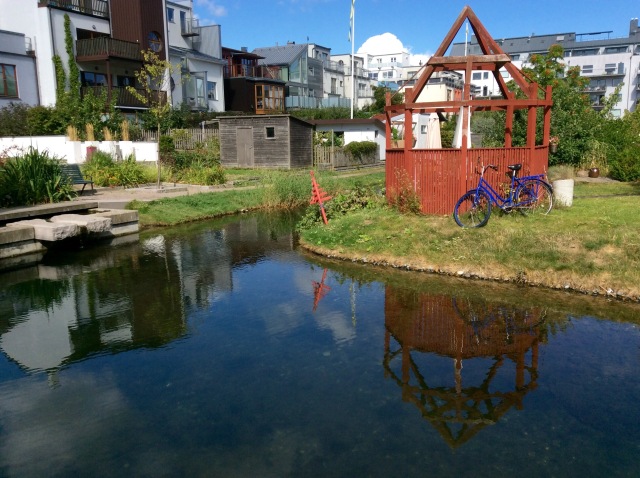 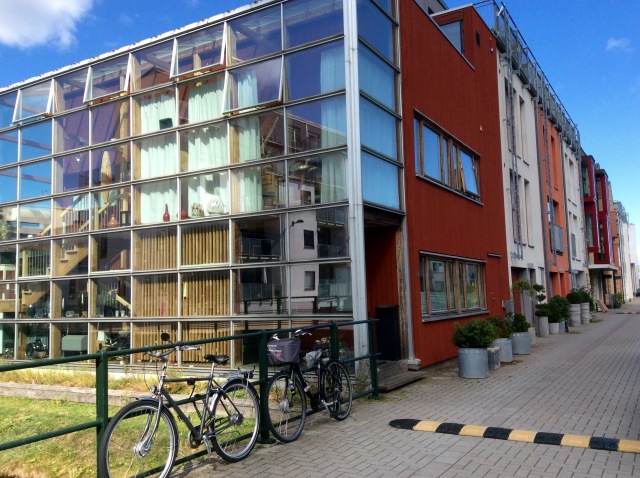 There is a fantastic supermarket on site too which reminded me of Wholefoods.  It was laid out and decorated in a way that made you want to browse.  Mary Portas would have approved. 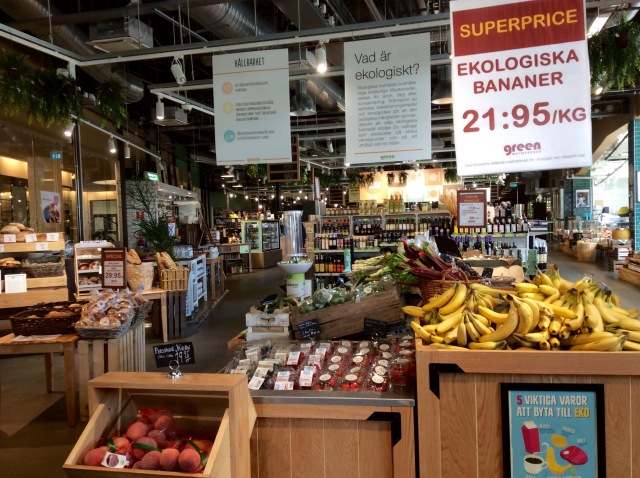 They had several in store eating areas too;  a coffee shop, a buffet and a bar!  Plus of course, as we are in Scandinavia, a huge crispbread selection!!

They even do local deliveries, the environmentally friendly way. 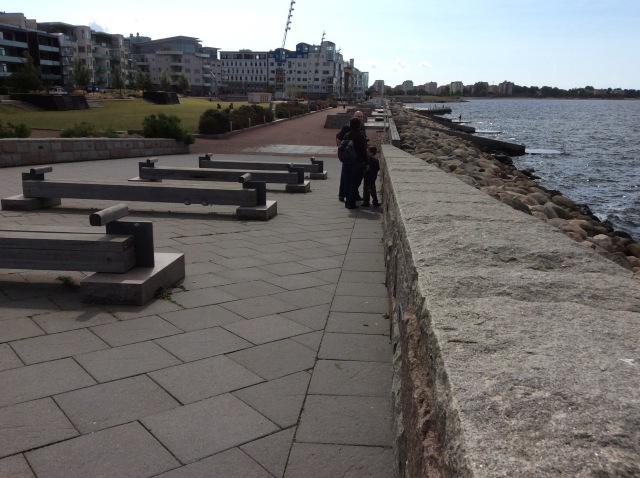 In the distance is the bridge to Copenhagen.

There were numerous wide open spaces for sitting and relaxing , accessing the sea and cycling around!

Cycling is really popular in Sweden and we had cycle paths to ride on everywhere we went.  Luckily none of our bikes ended up in the sea like this one.

We cycled along the length (and back ) of Ribersborg beach.  2 km of sandy beach leading in to very clear waters and studded with numerous piers which were wonderful for walking along, sitting on or just using to access the sea.

This is the bathing house where you can have a sauna and then bathe in the sea water. There is a male half and a female half as you have to go in the nude! I would love to do that but both children are horrified at the prospect but I may go tomorrow.  Alone.

These little piers were wonderful. 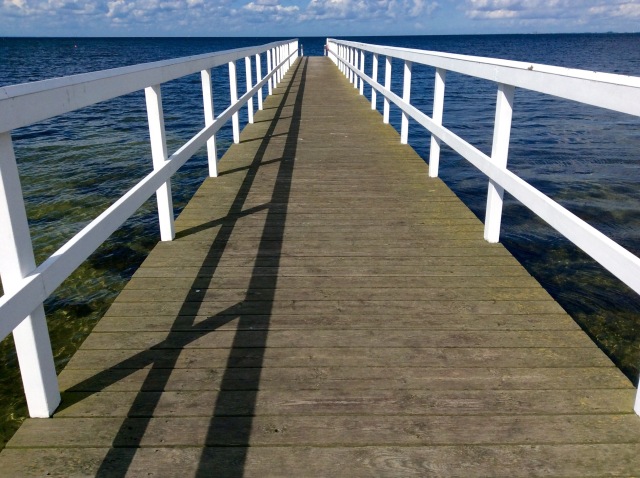 The Baltic Sea is much warmer then the icy Atalntic we swam in from Praia da Luz in Portugal. 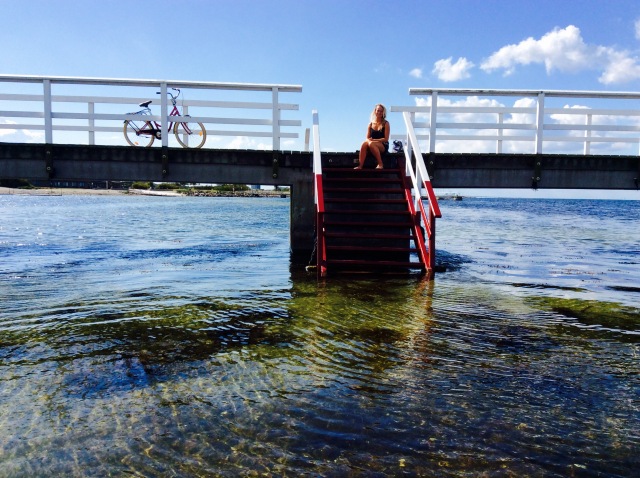 Next stop was the Malmo museum and castle which housed an aquarium and a fascinating exhibit about the time in 1945 when the castle housed refugees from the concentration camps.

I am not usually a fan of aquariums as I prefer animals to live in their natural habitat but this was interesting and had lots of information about animal conservation.  They also only had smaller sea creatures who hopefully didn’t miss the wide open ocean spaces as much as the larger animals would have done. 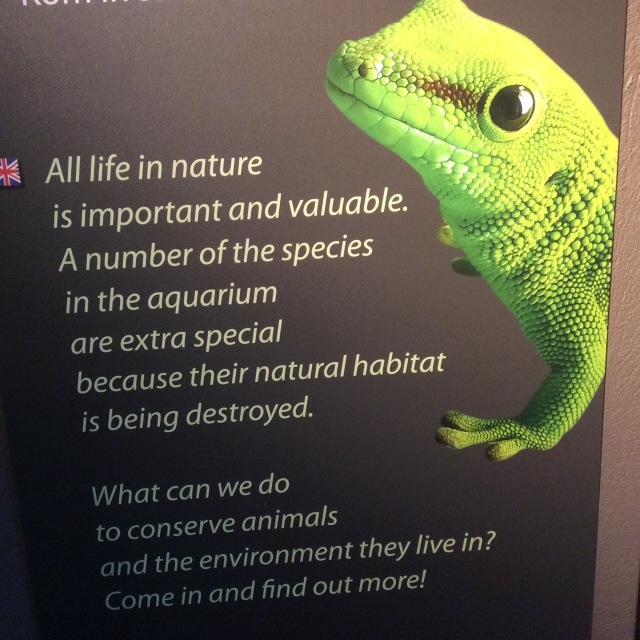 This exhibit, of eels, made us giggle.  The effect of the glass was to make the person in the dome look much smaller than they really are. 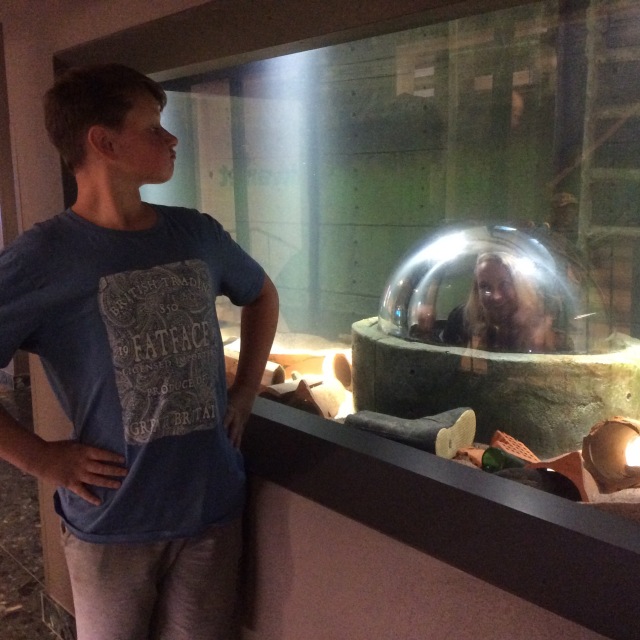 So what can we do to conserve animals?  Stop eating them !

We ended our visit to the museum with an unexpectedly profoundly moving exhibit.  At the end of WW2, the castle in Malmo was used to provide a temporary home for hundreds of refugees who had managed to survive the concentration camps.  Here they were cleaned and given fresh clothes and help in finding other family members who survived and a safe place to recover until they could head home.

There were a series of short films in various categories, for example, one was about a group of ladies who had been in a photo of them arriving at the castle and queuing to be given fresh clothes.  Many years later, a researcher wanted the names to go with the faces and found and interviewed some of the women about their experiences of arriving in Malmo.

My favourite was the films interviewing the family of survivors, and hearing them talk of life with a family member who had survived such unspeakable atrocities.  It was very moving and is an aspect of survival from the camps that I had not thought much about before.

When we walked in to the useaum it was sunny and there was blue sky.  In fact when we had a break for a cup of tea and a sandwich it was blue skies and we sat outside. 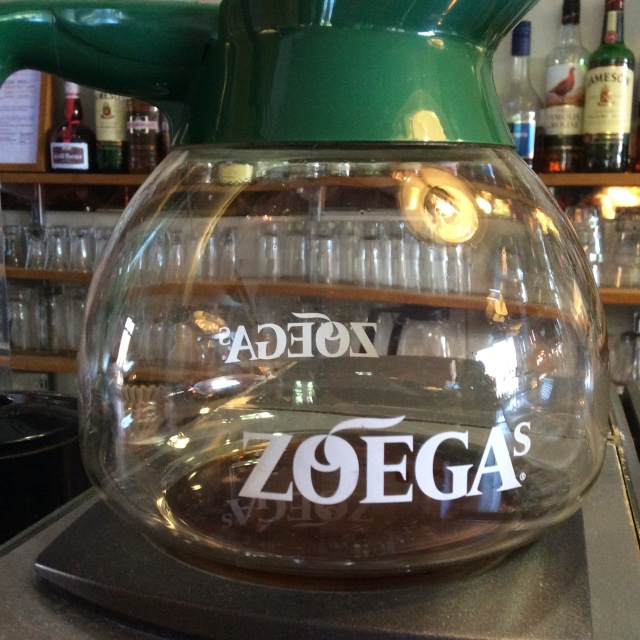 However, and perhaps very appropriately, while we watched the films, there was a sudden storm and torrential rain which added to the drama of the real histories we were watching.  Unfortunately ,  despite the rain, we had to leave as the museum was closing so we had a very wet cycle back to the hotel.

I have realised I didn’t do any food shots today.  Well, I did a lot of cycling so the exercise box gets a large tick.  So too, I am ashamed to say, does the over eating box.  When you enjoy food as much as I do, breakfast and supper buffets are not a dieters friend but I must do better tomorrow!  I will leave you with a photo of one kitchen accessory I do not have; a large ring crispbread holder. This is on the supper counter of the hotels evening meal buffet. 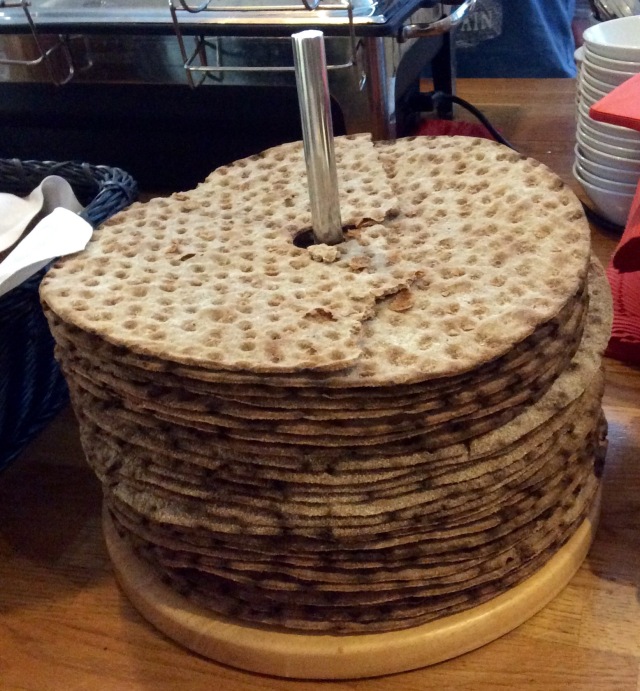 Have a happy evening.

Hi! My name is Zoe and I live in Hastings, East Sussex, with my son Harvey and dog, Milton. I have been fighting the fat for years but this time I am serious. I want to lose weight and gain health. This blog is about how I am changing my lifestyle so I can lose weight but not by just "being on a diet" but by making small changes to our lives so that as I lose weight, I gain health. I want my family to be healthy too and never have to struggle with their weight like I have. In common with many large people, I have gained and lost weight many times over the years. This time, I want to lose it and maintain a healthy low weight. I am interested in eating food that is nutrient dense and delicious and that appeals to children and adults. I do not eat animal products so follow a vegan diet. I try to use locally produced food supplemented with what I can grow myself. I support and try to use local farmers markets and farm shops. Another objective is to add more exercise to our days. It sounds so simple when I write it down :-)
View all posts by Lose Weight and Gain Health →
This entry was posted in Uncategorized and tagged Malmo, Sweden, Turning Torso. Bookmark the permalink.

4 Responses to Cycling around Malmo