Posted on December 30, 2014 by Lose Weight and Gain Health

Having recovered sufficiently from all the lovely socialising I have done over the past 2 weeks, I got some of my mojo back today and my thoughts turned to the New Year.  I began planning my diet and organising various aspects of my life which need attention.  There is a long way to go but I feel satisfied for having begun the planning of it all.

Part of my preparation for my healthy eating was to clear out the fridge.  I want my fridge to be filled with fresh and wholesome foods so anything droopy or wilting had to go!  Some things were fresh enough to consume but not quite good enough to eat so I made a juice.

Not the best but I thought of the nutrients and it was bearable.  It was the Ying to the yang of the little bundle of chocolate coins I found and consumed later with a cup of tea!

I had planned to play tennis this morning but frost prevented play which was frustrating.  However, instead of tennis I went for a walk with Harvey, Annette and our dogs so I did get some exercise in.

Harvey’s main objective on the walk was to find as much ice as he could – there was a lot around!

I think this was the heaviest frost so far and it is really pretty.  The sun was so low in the sky and the air so still you could see the rays of sunshine coming through the trees. 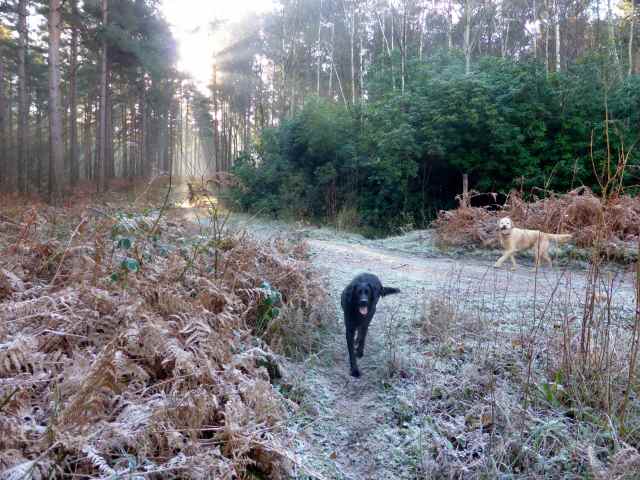 It was quite magical. 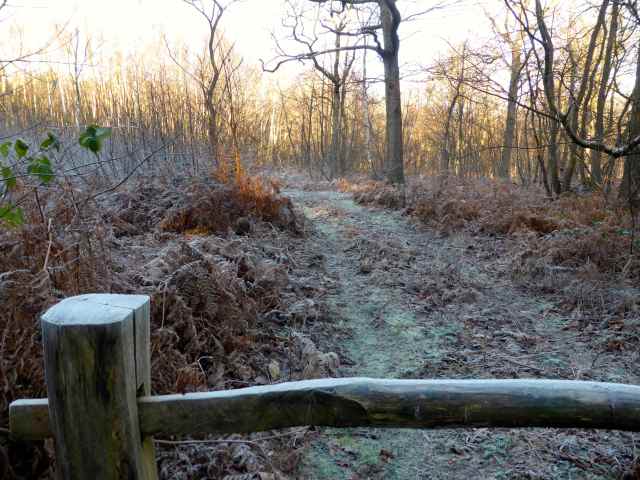 This pond was completely covered in ice. 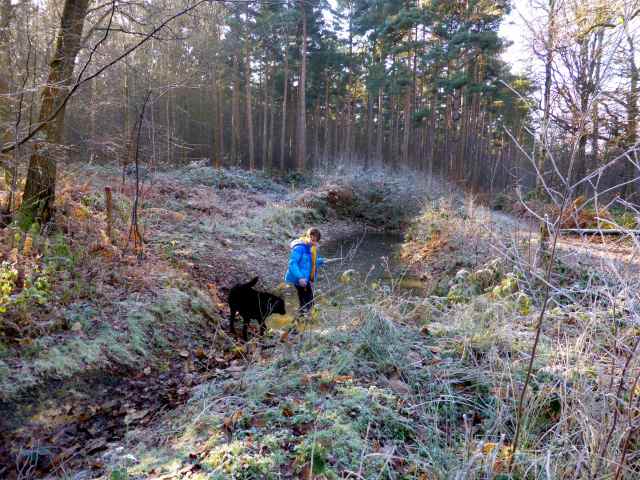 All good fun for the Little Fella and of interest to the dogs.

I was going to make a butternut squash for lunch but instead had cheese, crackers and grapes.  I had about twice this many crackers, all the Stilton but hardly any Gruyere. 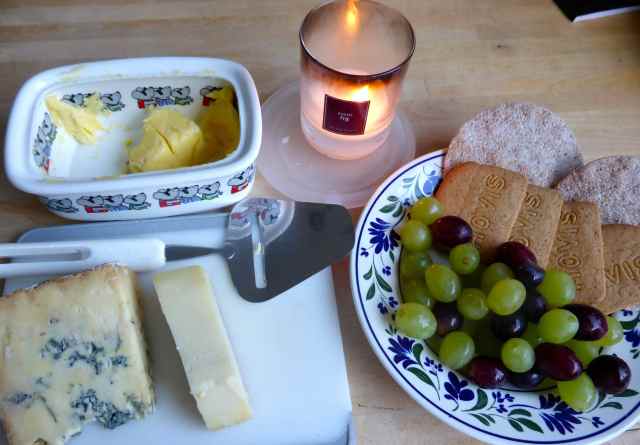 For dinner I made a surprisingly tasty supper.  I thought it would be one of those midweek suppers which is fine but not memorable but it was actually really good.  I cooked up some wholewheat fusili pasta.  While that cooked I fried some bacon and then added onion, yellow pepper and broccoli.  When that was nearly cooked I added chopped up left over turkey and bacon wrapped sausages.  Finally I added a generous dollop or two of our homemade cranbery sauce. 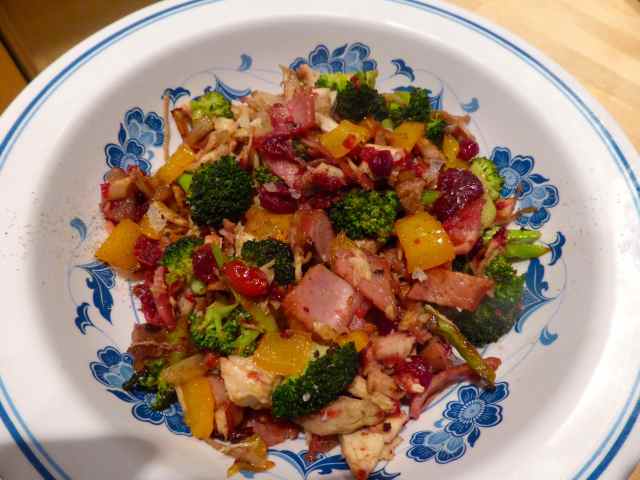 This has used up all the turkey and remains of Christmas lunch apart from one more serving of cranberry sauce plus some more week old vegetables.

This was so easy to make and so yummy I would happily eat it again.  It had that winning combination of sweet (cranberry sauce) and salty (bacon) and a great contrast of textures.  Plus it had lean protein (white turkey meat), vegetables and wholewheat pasta so while not a meal I would promote as healthy (mainly due to the pasta, sugar in cranberry sauce, sausages and bacon) it did have a lot to commend it. 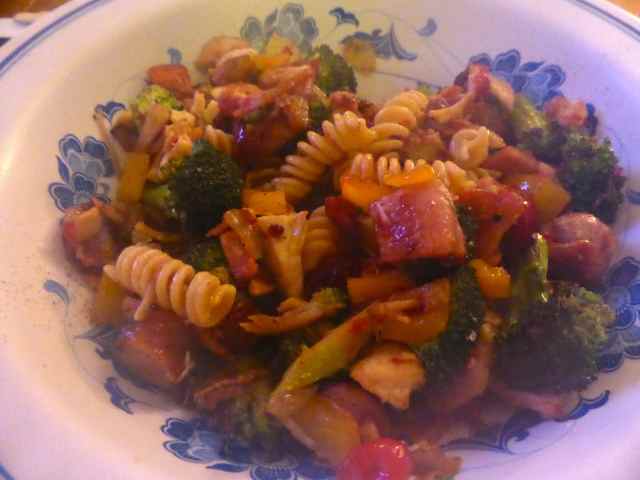 This however has nothing going for it apart from the absolute pleasure and state of virtual Nirvana achieved while I ate it;  2 perfectly cooked (chewy in the middle) meringues on some lightly whipped double cream.  Food of the Gods and one of my absolute favourites.  I would have had it with berries but I don’t have any in the house.

So, a good day today.  Not with eating but I have had far worse lately.  But good because I saw Annette, had a lovely walk and spent useful time planning.  And relaxing.  Lots of much needed relaxing today.

Hi! My name is Zoe and I live in Hastings, East Sussex, with my son Harvey and dog, Milton. I have been fighting the fat for years but this time I am serious. I want to lose weight and gain health. This blog is about how I am changing my lifestyle so I can lose weight but not by just "being on a diet" but by making small changes to our lives so that as I lose weight, I gain health. I want my family to be healthy too and never have to struggle with their weight like I have. In common with many large people, I have gained and lost weight many times over the years. This time, I want to lose it and maintain a healthy low weight. I am interested in eating food that is nutrient dense and delicious and that appeals to children and adults. I do not eat animal products so follow a vegan diet. I try to use locally produced food supplemented with what I can grow myself. I support and try to use local farmers markets and farm shops. Another objective is to add more exercise to our days. It sounds so simple when I write it down :-)
View all posts by Lose Weight and Gain Health →
This entry was posted in Healthy Lifestyle, Uncategorized and tagged Cranberries, Walking, Woodland Walk. Bookmark the permalink.