WOW, WOW and even more WOWs. What a day of complete wonder.  A day of wonder and awe for me and Lara and a day of ‘I wonder when this will ever end’ for the Little Fella!

To get to breakfast we walk past the pool which is the only part of Florence Harvey is really interested in and today he was told the pool would have to wait until after we had visited 2 art galleries.

We had prebooked tickets for the Uffizi and Accademia so were up for breakfast reasonably early. 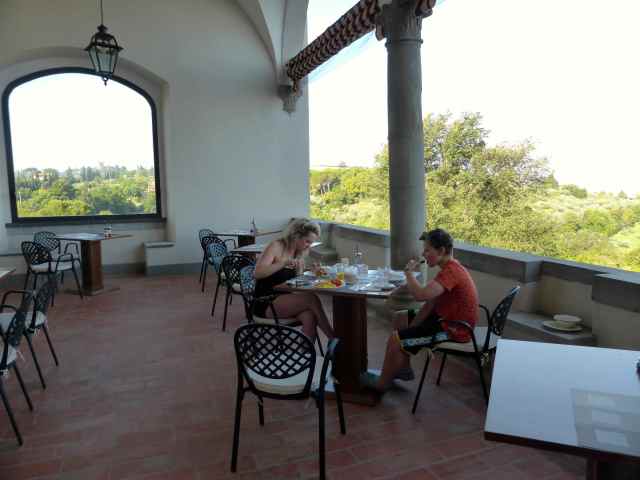 Then in to town and the first stop was the Uffizi gallery.

This is the oldest gallery in the world and I knew it was famous for housing Botticelli’s Venus but to be honest, knew very little else about it. 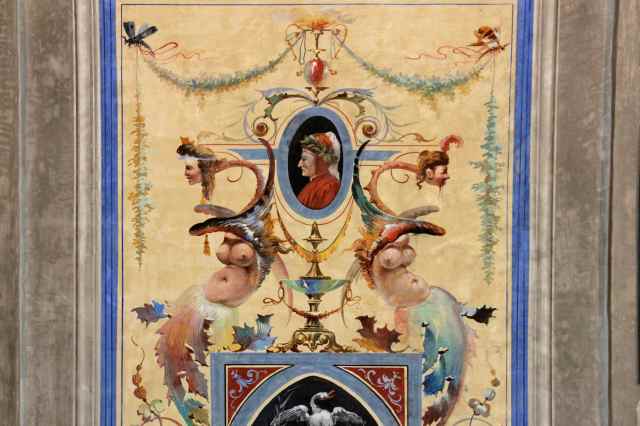 I was completely unprepared for all the incredible frescoes painted on the ceilings.

I spent practically all my time in the gallery looking up in absolute astonishment that something could be painted that was so beautiful.

There she is.  Surrounded by crowds and if you are patient, as I was, you can get to the front. 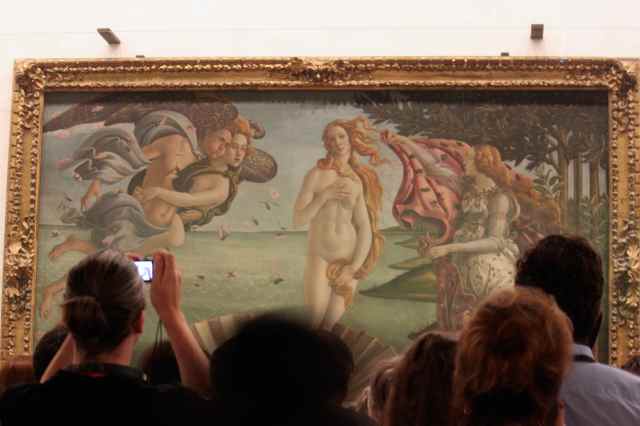 They did a good job of being interested for a while but in all honesty, most of the paintings are religious and to the uneducated in the ways of the art historian, one Madonna looks much like the next.  I don’t mean that to be offensive in any way to these great painters and those who admire them but it was tough to be interested in all the actual art hanging on the walls.

They were all just incredible.

This room was different but we were only allowed to peer in. 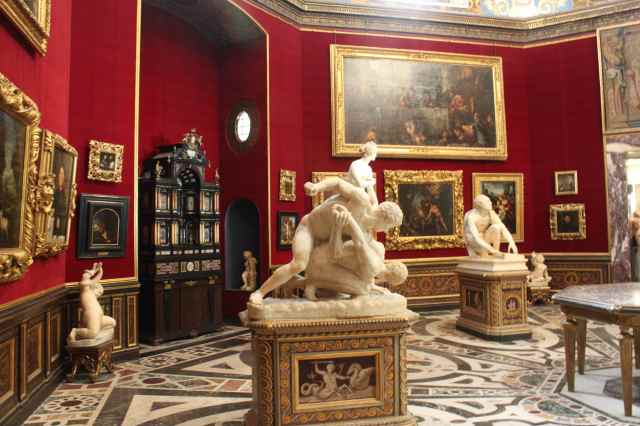 There were lots of paintings that looked similar to this one.

Back to the ceilings for me. 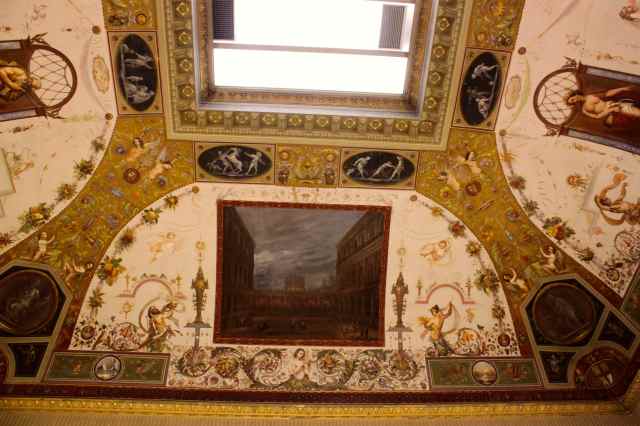 It can’t be easy to actually paint a ceiling which makes them even more incredible.

Presumably the painter lay on his/her back and painted from a horizontal position. 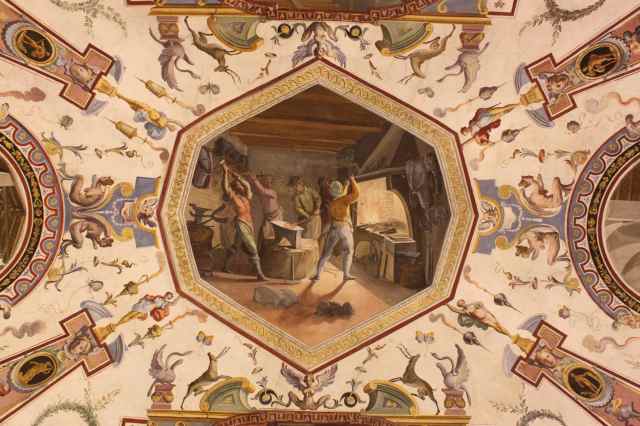 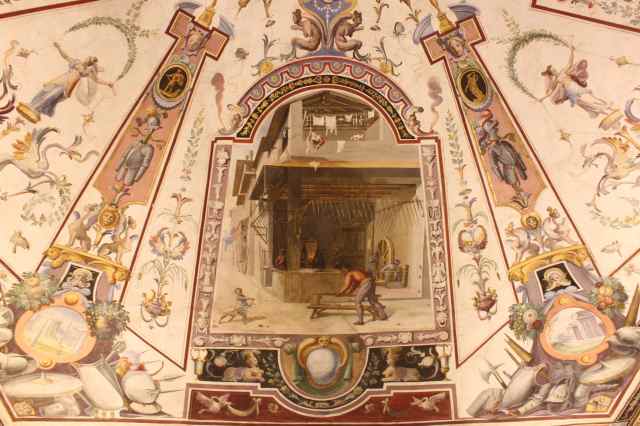 I wish I could get closer to see some of these in more detail. 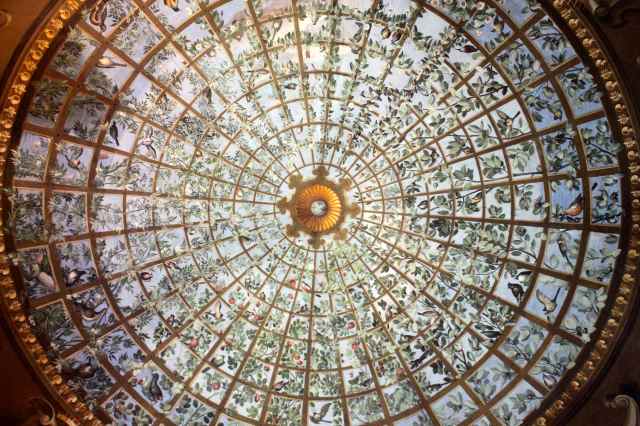 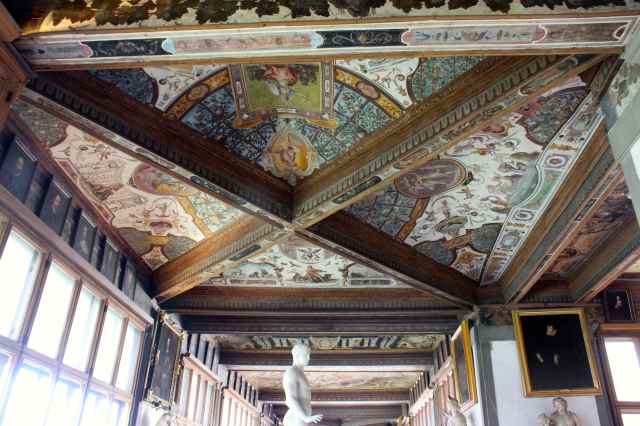 The long corridors of the Uffizi have a fabulous fresco on every section of the ceiling.

The Uffizi is made up of two long parallel buildings joined at one end.

This is the Ponte Vecchio as seen from the Uffizi.

How much longer do I have to be in here?

Fresh air 🙂  The cafeteria at the Uffizi looks out across to the Duomo and is next to the Palazzo Vecchio, part of which you can see on the right.

There was a wonderful exhibition of botanical drawings by Jacopo Ligozzi which we all enjoyed and this scaled model of the City was interesting too.

I was astonished at the beauty of the architecture inside the Uffizi and the painted ceilings.  Worth a visit for that alone.

Next stop was a pavement cafe for an espresso and some water.

There are so many interesting little statues on street corners.  This was a charming running fountain. 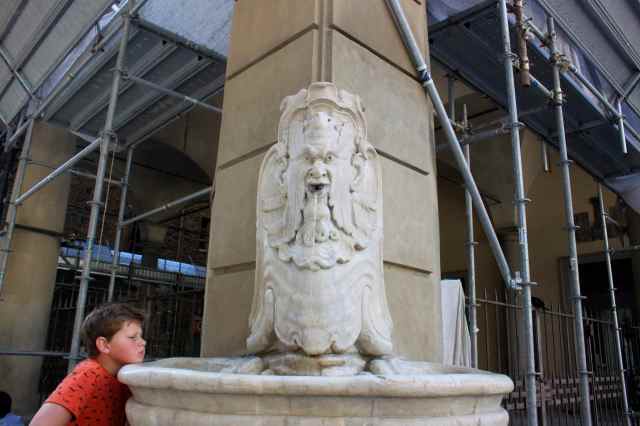 I realised when I saw this balcony that one thing Florence does not do well is flowers.  You hardly see any flowers anywhere which seems so unusual to me and which made this little balcony quite remarkable.

We set off in search of a gelataria we had been recommended and came across this little haven.

I didn’t realise when I walked in but this is part of the Palazzo Vecchio. 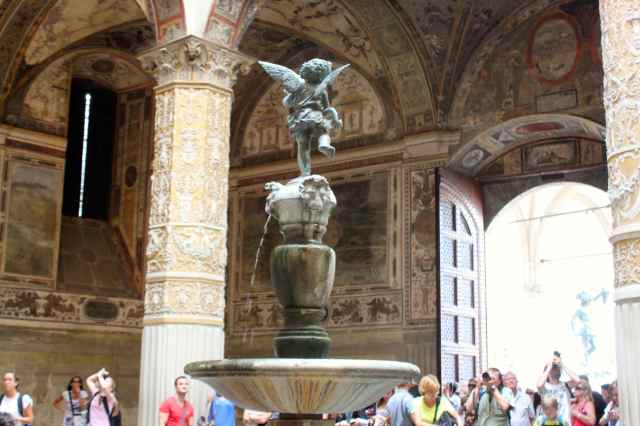 This is a copy of Verrochio’s Putto fountain and is completely charming.

I would have loved to go inside the Palazzo Vecchio but thought that might stretch Harvey’s patience a bit too far so we pressed on in our hunt for a particular gelateria.

It was a very pleasant stroll along some quieter streets but when we eventually found the Bar Vivoli Gelateria it was shut 😦  I don’t think August is the best month to visit Florence as quite a few places close so the owners can retreat to the beach and beat the heat.

So we wandered around some more, looking for a gelateria that sells sorbets – easier said than done!  We came to the Piazza di Santa Croce;  apparently one of Florence’s largest and most impressive Piazzas.

Across one side is the Gothic church of Santa Croce.

This houses the tombs of Michaelangelo and Galileo but the mission for a sorbet continued so we did not go inside. 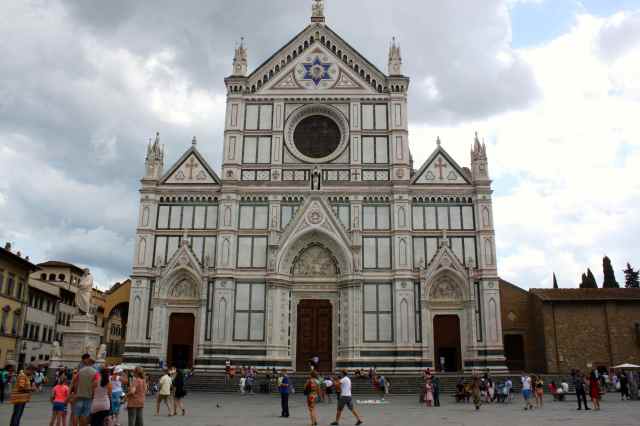 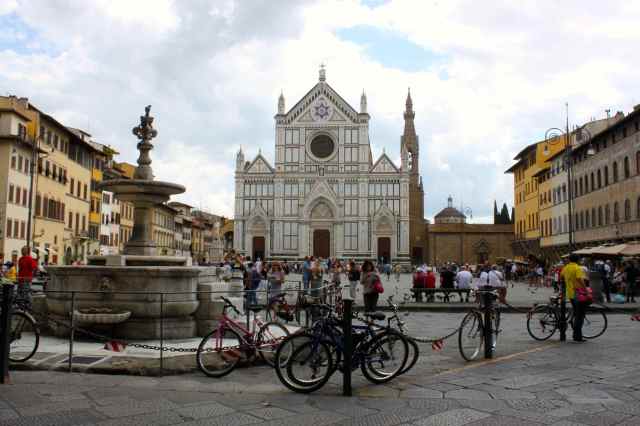 We eventually found somewhere that sold ice lollies and harvey ate that inside a very fancy gelateria where Lara and I enjoyed a heavenly ice cream each.  Mine was coconut and it was fantastic.

We did resist all the cakes, tempting as they were. 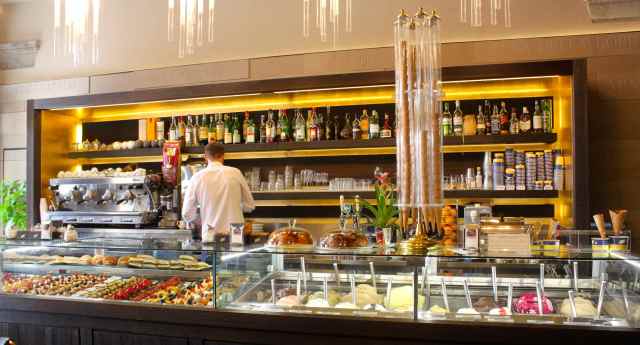 This charming little painting was in an alcove in a wall we walked past.

This tiny little deli was about the same size as Vegetare in Cranbrook ie tiny but well stocked.

In the afternoon we walked up to the Galleria dell’ Accademia.  I was really only interested in seeing David but I was really interested in seeing that.  When we were young my Father brought a poster of it back from his travels and I believe it lived in a bathroom and was the object of much tittering, as one may expect from a house full of females.

This is one of Michaelangelo’s other marble sculptures and seeing this unfinished piece, makes David even more remarkable.  How ever did he create David from a chunk of marble.  An enormous chunk of marble at that!

Here he is, the hunk from the chunk, created between 1501 and 1504.  Absolutely breathtaking.  Partly because it is so enormous.  I knew he was bigger than life size but I did not expect him to be 17 feet tall and he weighs 6 tons!  I also learnt today that Michelangelo completed David by the time he was 29 which is extraordinary.

I also learnt today that David is holding a sling and the strap hangs down his back; I had never realised that before. 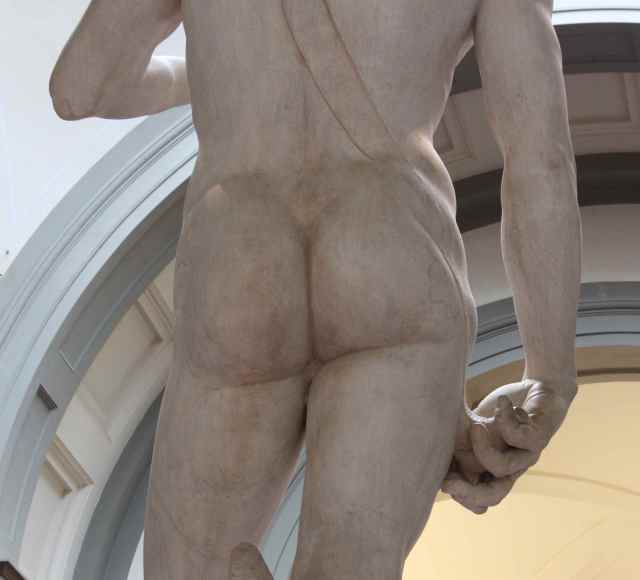 How did Michaelangelo do this? 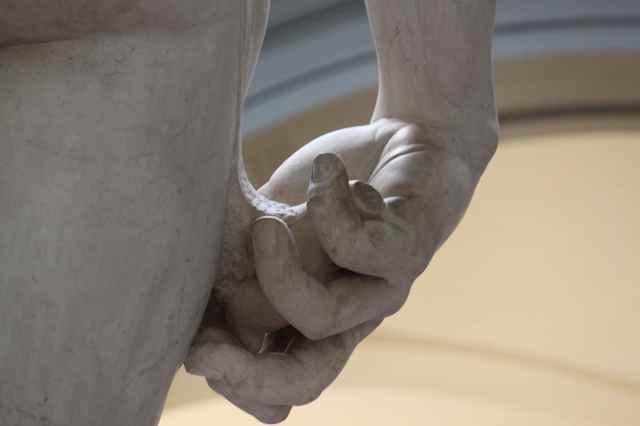 The toes remind you of how rough the unhewn marble was.  Michaelangelo did finish them but they were damaged by a hammer. 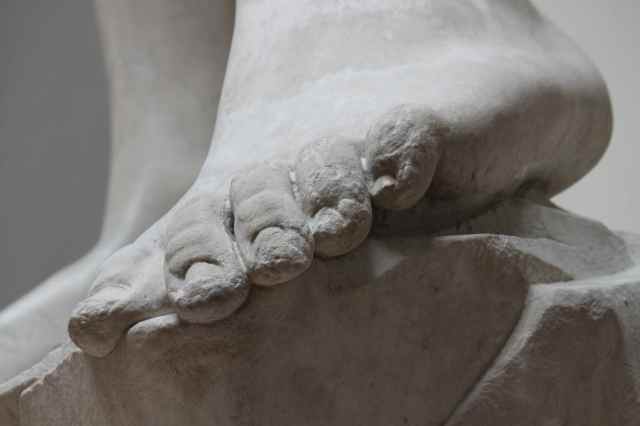 The hand was one of my favourite parts.  It is so detailed and life like, despite its huge size, that you almost expect him to move and flex those fingers. 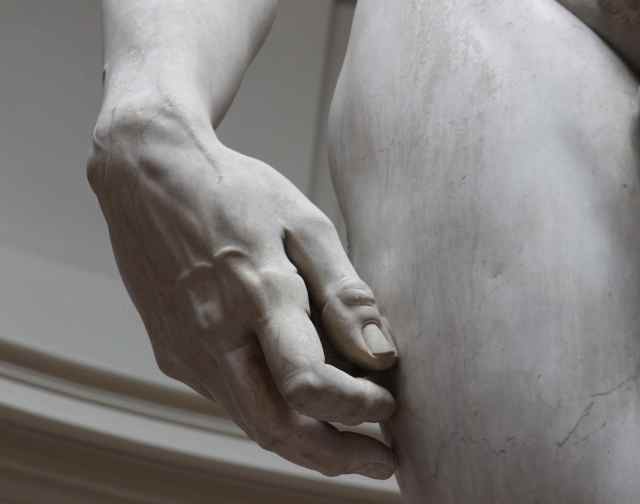 David, you absolutely did not disappoint.  I am sure I saw you breathing. 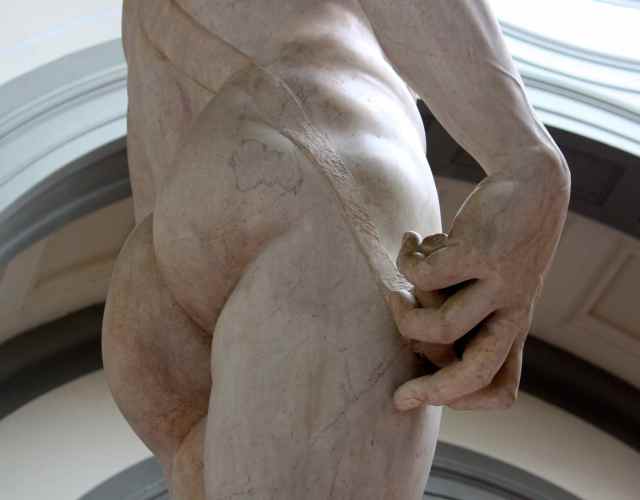 After the Accademia we wandered around some more, looking for somewhere for a late lunch.  We walked past the Duomo.

The detail of the work on the outside of this building is incredible. 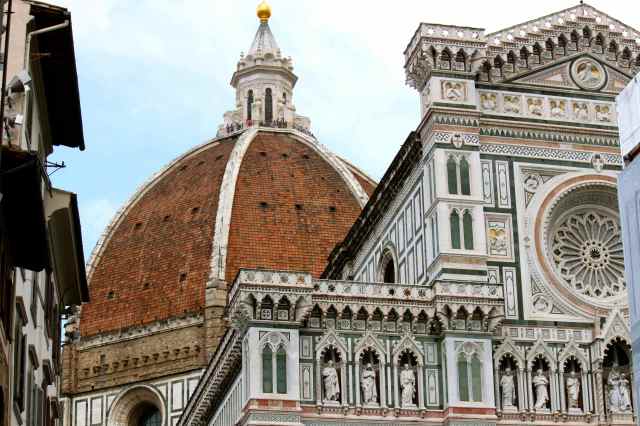 We ate at one of the restaurants that spills out on to the pavement near the Duomo so we could enjoy a meal and enjoy gawping at the Duomo.  I did notice how slowly the queue moves along which is shame as I really want to see inside. 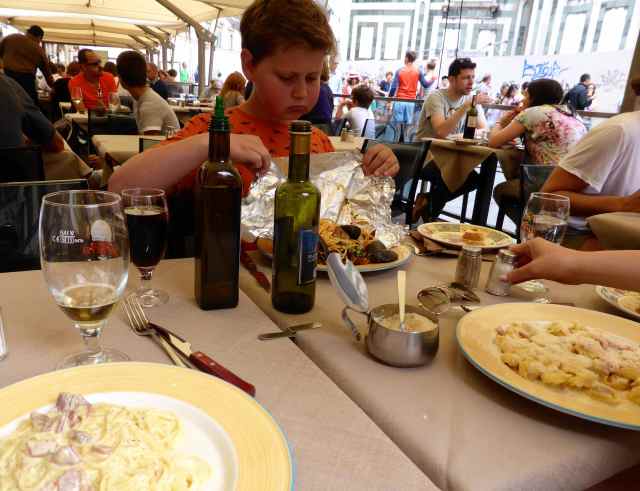 I had spaghetti carbonara with rocket and parmesan.  It was delicious but obviously not  good for one’s diet! 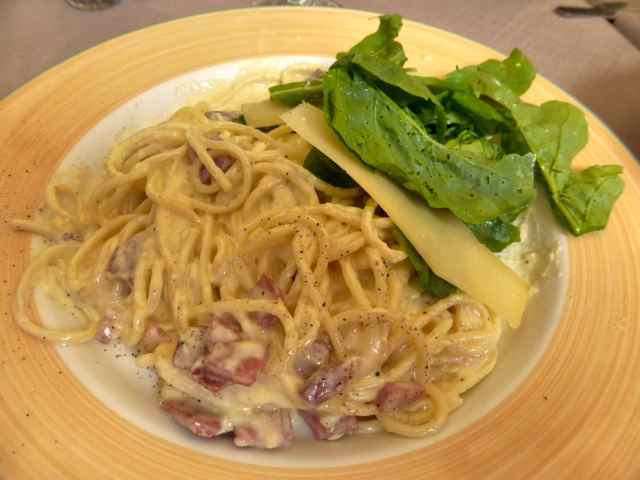 Back at the hotel, someone was hugely relieved to be in the pool and even happier to be joined by 3 boys of a similar age and the 4 of them had the pool to themselves until the evening.

We didn’t need dinner but instead enjoyed some wine and snacks at the hotel.  All that oohing and aahing is quite tiring!

Hi! My name is Zoe and I live in Hastings, East Sussex, with my son Harvey and dog, Milton. I have been fighting the fat for years but this time I am serious. I want to lose weight and gain health. This blog is about how I am changing my lifestyle so I can lose weight but not by just "being on a diet" but by making small changes to our lives so that as I lose weight, I gain health. I want my family to be healthy too and never have to struggle with their weight like I have. In common with many large people, I have gained and lost weight many times over the years. This time, I want to lose it and maintain a healthy low weight. I am interested in eating food that is nutrient dense and delicious and that appeals to children and adults. I do not eat animal products so follow a vegan diet. I try to use locally produced food supplemented with what I can grow myself. I support and try to use local farmers markets and farm shops. Another objective is to add more exercise to our days. It sounds so simple when I write it down :-)
View all posts by Lose Weight and Gain Health →
This entry was posted in Uncategorized and tagged David, Florence, Michaelangelo, Uffizi. Bookmark the permalink.