Posted on November 9, 2013 by Lose Weight and Gain Health

I spent a very enjoyable and interesting day today at Blogfest.  I have not been before and was not sure what to expect.  Having arrived at the venue near King’s Cross in London, avoided the pastries and enjoyed a coffee, we went inside one of the auditoriums for the first talk.  I was girly swot and sat in the front row.

The very gorgeous Richard Bacon chaired a debate on ‘The new Wild West: what kind of internet do we want?’  He did a really good job as there were some strong discussions at times and he kept the debate moving along.  It was a fascinating talk.  Stella Creasy, MP for Walthamstow was really impressive.  I am always impressed by very eloquent and erudite speakers and the more she was challenged, the more eloquent she became.  I always deteriorate in to mumbling and repetition when under pressure but she was marvellous.

The other clever people on stage were Mark Stephens (Julian Assange’s lawyer!), Marta Cooper and Toby Young, aka Toadmeister.  It was a very interesting debate about what is and is not permissible on Social Media and what can we do about it when we get unwanted comments, stalkers, trolls and even threats against us, as some of the panellists have.

Next up was ‘In it for the Lolz’ i.e. how to write funnier posts.  From left to right were Tim Dowling, Sonya Cisco, Andrea Mann and Viv Groskop. 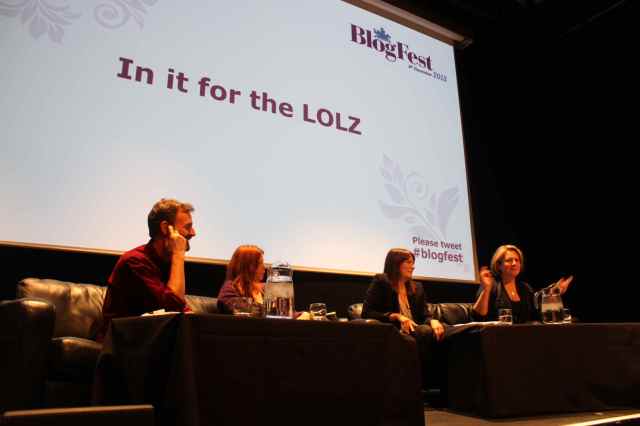 These two were marvellous.  Andrea is the comedy editor of the Huffington Post.  She was funny and interesting and had some great anecdotes.  Viv was very funny.

We then had Think Bombs which was three presentations on aspects of how technology will shape how we think.  This was excellent.  Tanya Byron gave a very impressive talk without even appearing to look at notes, recommending we let children embrace new technology.  She suggested we should not take it away from them when they walk in to school but let them use it to research and learn.  Sue Black gave a lovely personal talk about her life and how she is now teaching women, via Techmums to become empowered through technology.  Last but definitely not least was Jon Ronson (The Men Who Stare at Goats) who gave a fascinating talk about identity theft using his real life experience on his Twitter account. 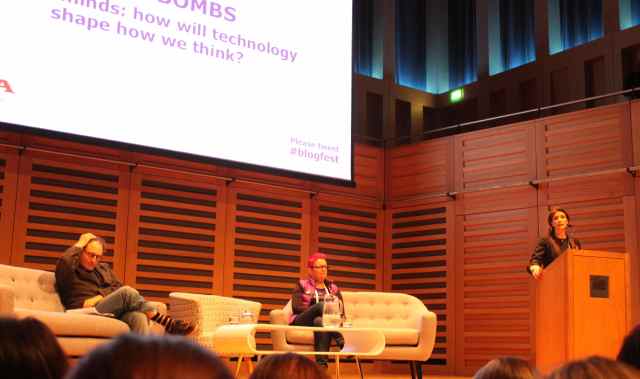 There was a blog clinic where you could go and ask experts questions about how to improve your blog.  I spoke to Annie Spratt about getting more readers, Emily Leary about making money from your blog and Carrie Barclay and Darren Baldwin who were very helpful, and pleasingly complimentary, about my photography. 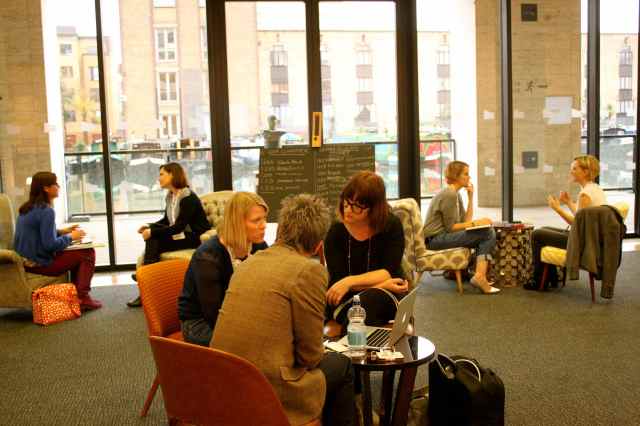 This was interesting!  Speakers from left to right were; Rachael Lucas, Tom Allin, Maisie McCabe, Emily Leary and Gina Schauffer. 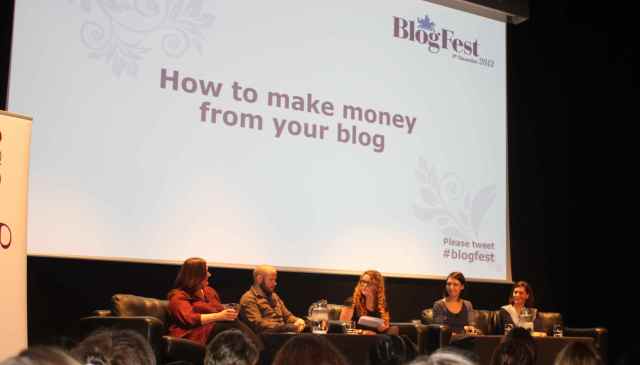 I then made a bad decision.  I chose how to beautify your blog rather than how to write better content.  This talk was a bit disappointing and I didn’t feel I learnt anything.  Not because I know it all.  I actually had high hopes of learning some good tips as I fancied a bit of a blog makeover.  But it was aimed more at beginners so I was annoyed with myself.  The writing talk had some excellent speakers and I wished I had attended that talk instead.

After tea, where I resisted cake, there was, quite frankly, a ridiculous debate.  The topic irritated me before we had even begun; Can you be a mummy blogger and still be a feminist?  I am a Mother and a blogger and a feminist.  The three are descriptions I can apply to myself.  Not one of those descriptions makes either of the other two impossible.

The opening question was too stupid – can you be a feminist and make jam?  Really!!!!  I think these were intelligent women and can’t believe they even tried to debate such a stupid question.

From left to right the speakers were: 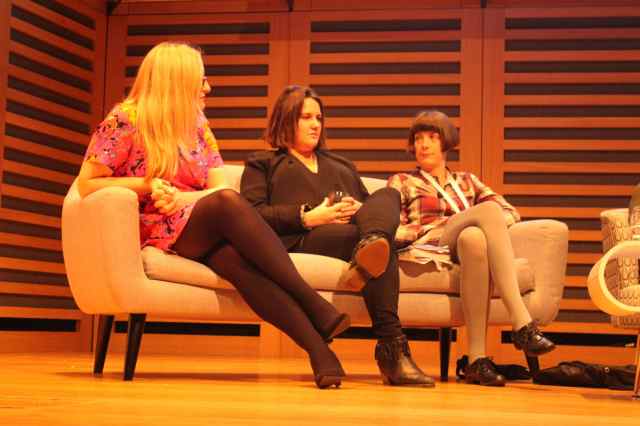 Eleanor Mills, Sarah Ditum and Victoria Smith.  As the session went on the audience became increasingly frustrated and fractious.  We were all encouraged to tweet and live tweets were displayed on the large screen above the speakers.  As the tweets became more scathing of the debate, the audience and then the speakers were distracted until the organisers removed the live feed which was a shame as some of the tweets were hilarious.

To end the day we had the marvellous Jo Brand who gave a typically ascerbic talk and then answered loads of questions.

A splendid end to an, on the whole, very enjoyable, interesting and useful day.

How was my eating?  All a bit mushy actually!  But no added sugar.

I started with ground porridge, exactly the same as the day befores.

I was really disappointed with the food at Blogfest.  Bearing in mind it was the Mumsnet Blogfest, which meant virtually all the delegates were female, there was very little fresh food available all day apart from about 10 fruit kebabs at lunch time for 300 people.  On arrival there were pastries, mid morning there were biscuits, in the afternoon it was cake.  Lots of women don’t want to eat cake and considering I paid £95 for the day, I think I could have expected some fresh fruit to be on offer!  It is apple season so even some platters of apples, which are cheap and plentiful, would have been easy and affordable to provide.  I managed to resist all the sweet food but I did get hungry. 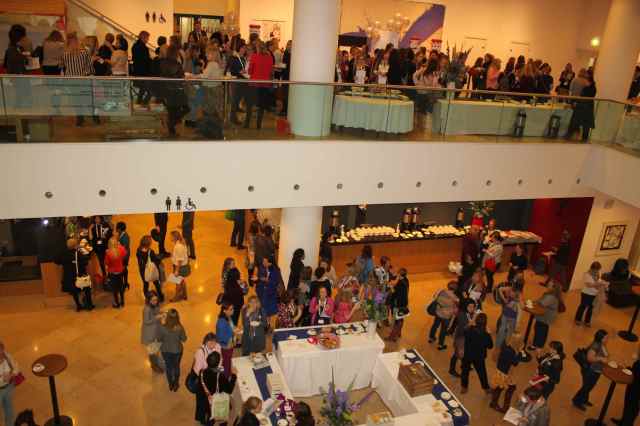 Lunch was actually very tasty.  I chose the fish in a white sauce with vegetables, served with cabbage and 1/4 of a bagel.  I would have preferred some fruit to the bagel but was hungry so I ate it.

This was the only table I saw of desserts.  I had a late lunch as I went to the blog clinic first and when I came out, these were all gone.  I wish I had taken a fruit kebab when I took this photo.

The boys wanted a curry for supper.  I was at the station by 8pm so I collected a curry on my way home.  I had a Tarka Dahl with rice and an onion bhaji.  It was from Jumeirah in Staplehurst.  It was perfectly adequate but not amazing. 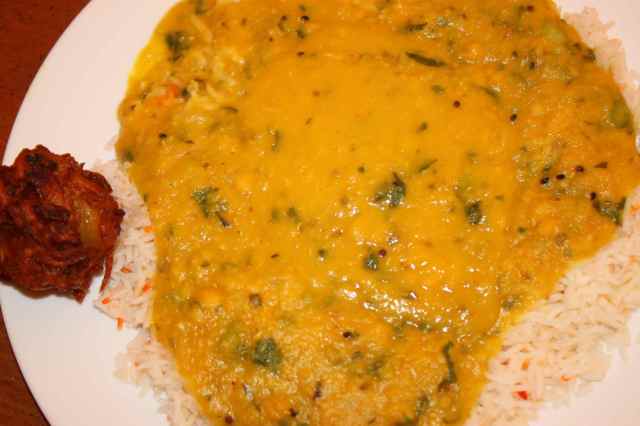 So,  my first visit to Blogfest.  I enjoyed it and will probably go back next time.