Posted on August 8, 2013 by Lose Weight and Gain Health

Crocodile kebab anyone?  Am I joking?  Read on and you will see 🙂

Breakfast on our tiny balcony; natural yogurt, banana, papaya and passionfruit.  I don’t really like papaya much I have decided, which is a shame as I have rather a lot to get through!  I dislike the taste and consistency but is is manageable mashed in to yogurt with fruit I do like. 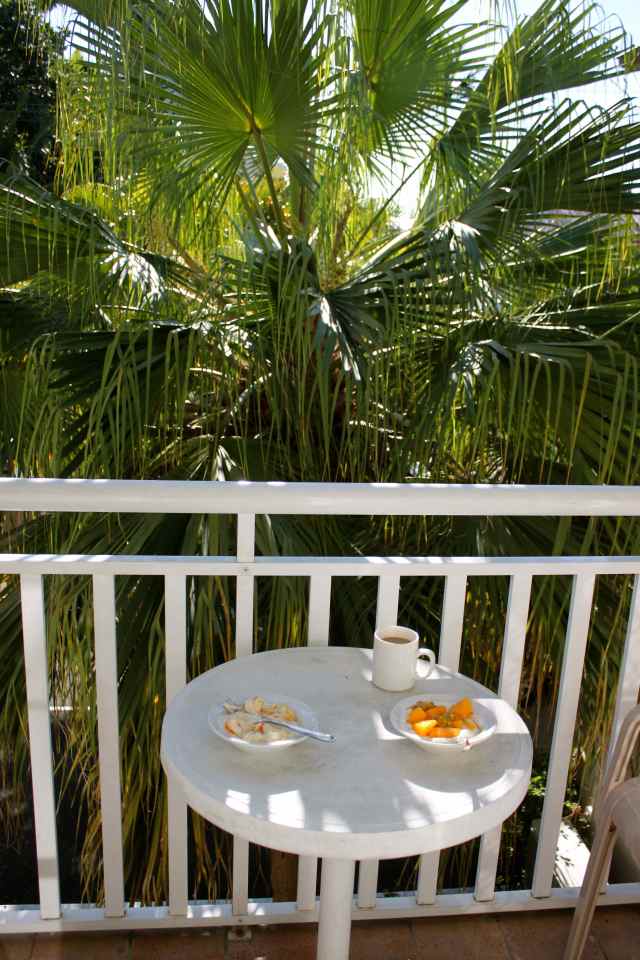 We discovered this fabulous shop today.  It was expensive but it had so many amazing goodies for sale.  I wish we had a quality shop like this at home.  Maybe I will open one in the future, with a fabulous cafe attached to it.  I would love to do that.

We bought some provisions for lunch (crackers, humous and fruit) and to take home (raw Manuka honey and macadamia nut butter for example) in here.  I could have bought practically the entire shop!

Harvey chose this morning’s activity – a visit to Hartley’s Crocodile Adventures.  This is not a crocodile you may be thinking.

You would be correct.  It is a Cassowary.  They are found in the wild in this part of Queensland but this was at Hartley’s which had a good variety of Australian animals, reptiles and birds in addition to the crocodiles. 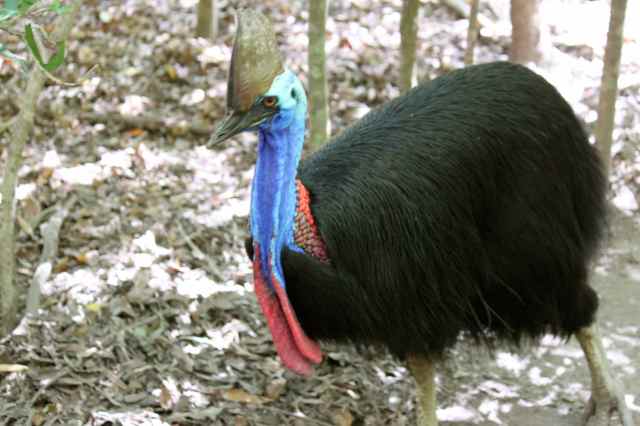 Cassowaries are part of the same family as Ostriches, Emus, Rheas and Kiwis.  The latter  surprised us as Kiwis are little and cute but the others are large.  And not really very cute.

Sorry Mr (or Ms) Cassowary but you is ugly!

This is what the little fella wanted to see – crocodiles.  This baby (16 months old) has its mouth taped as despite its small size (that is Harvey’s hand on it) it is strong enough to bite through to the bone and if it chose to try a death roll, it could dislocate your finger.

This is one of the Estuarine crocs, usually referred to as “Salties” or “Saltwater Crocodiles”.  As we learned today, they can also be found in freshwater so it is more accurate to call them “Estuarine Crocodiles”.  My blog is so educational 🙂

We went on the boat ride which was compared by a Fair Dinkum Aussie who was very entertaining, in a stereotypically Aussie male way.  Amusing in small doses and all part of the Hartley’s experience.

He dangled some meat over the side of the boat to encourage the crocs to jump up. 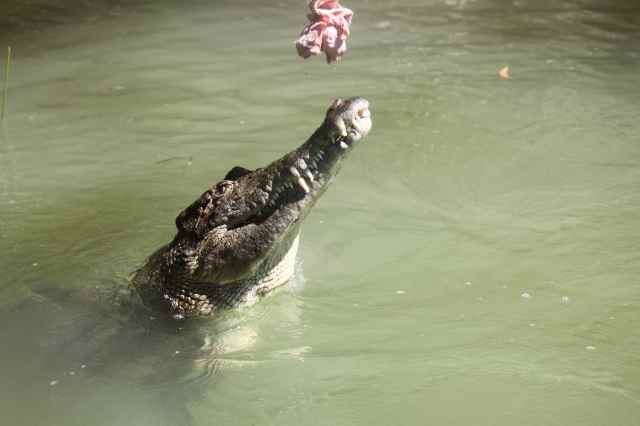 Did you know they can jump right out of the water?  I did but it still made me jump, hence the fuzzy image.  So apologies for poor picture quality but it was the best one I had. 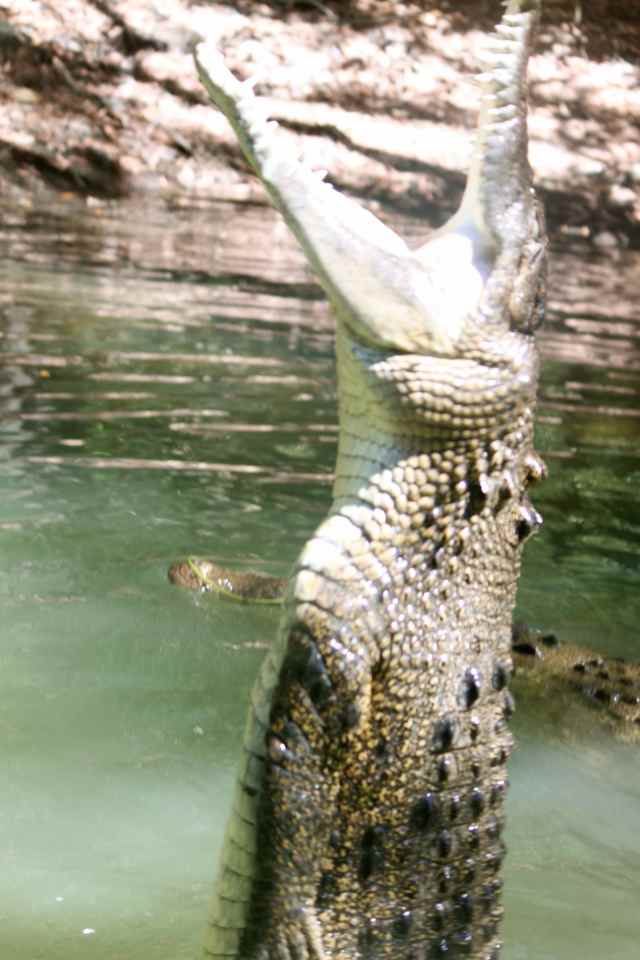 These big beasts terrify me. 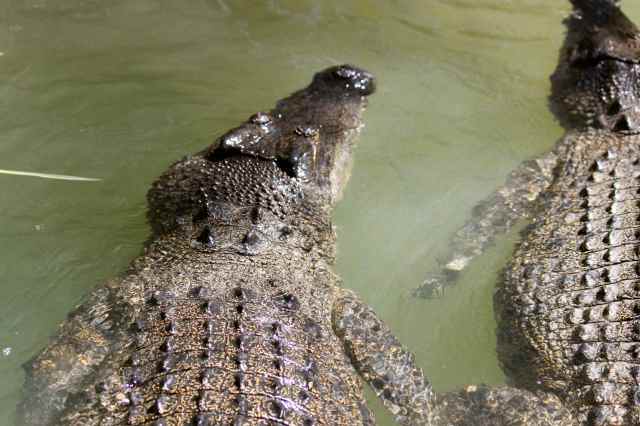 Hartley’s has a zoo where they conserve (they have taken in several large crocs from the wild which were being a nuisance) the crocs and educate the masses.

They also have a farm where they breed crocs for their skin and meat. 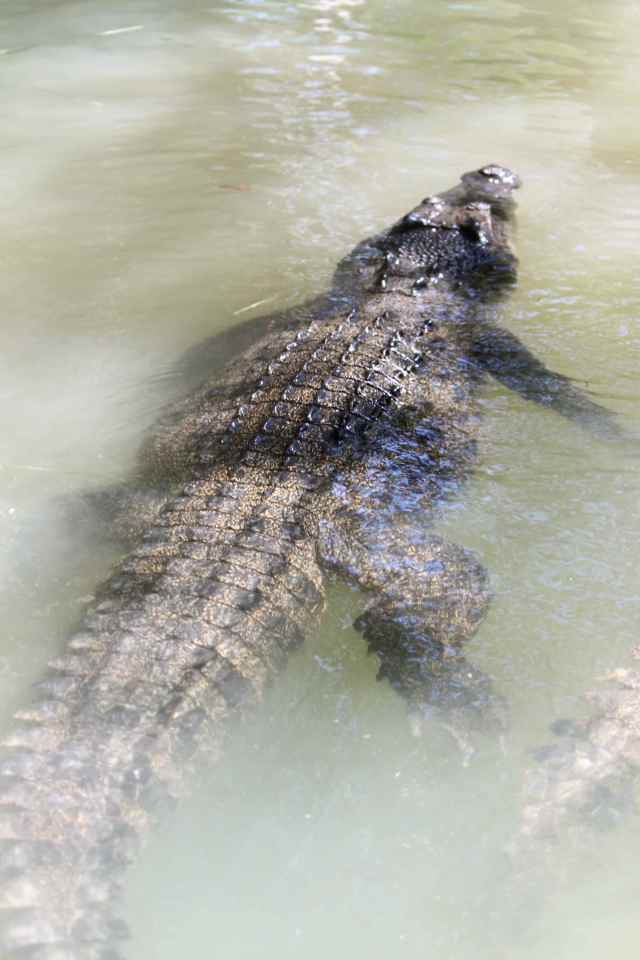 So all the crocs in these photo are safe but their cousins next door in the farm are not. It may seem contradictory to have a conservation project next to a farm.  As Mr Fair Dinkum explained, when humans put a dollar value on an animal, its conservation is guaranteed.  As long as we want to buy crocodile products, they will be bred and thus prevented from extinction. So that’s one justification for farming animals.

We had a light snack before leaving Hartley’s.  One bowl of chips shared between 4. 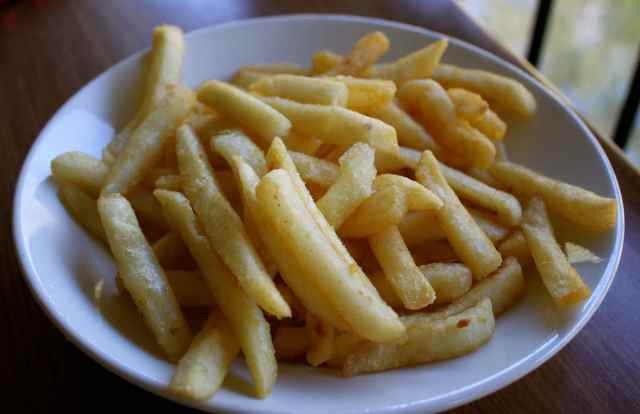 With 2 portions of crocodile kebabs to share.  This is one portion so we each had one kebab.

I shared mine with Harvey so I got most of the salad too.  Crocodile is the same colour as chicken but has more of the consistency of pork.  It was quite a mild and pleasant flavour. I don’t think I would eat it again but I enjoyed sampling it today.

Lara chose this afternoon’s activity – a trip to a beach.  We went to Yorky’s Knob which is just outside Cairns, to the north.

I love this beach report you can read as you walk on to the beach.  It gives you information about the temperature of the air (27 °C), the sea (22 ° C), wind direction, tide times, beach rules and when the beach is patrolled. 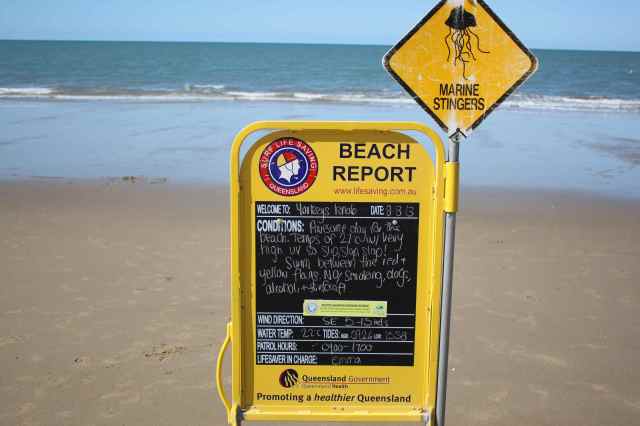 The Australian lifeguard service is a fantastic service.  I assume it is all paid for in taxes in some way but for us visitors, we get the benefit of a lifeguard on a beach we have not paid for and there was no car parking charge either.

This beach has the additional benefit of a net which is quite controversial.  The nets do not guarantee to stop all sharks and in fact many have been trapped on the beach side of the net.  They also trap other marine life such as whales, dugongs, dolphins and turtles.  However, the number of shark attacks has been reduced since the nets were introduced so I felt slightly happier knowing there was a net out there.

Will it be a bit crowded for us? 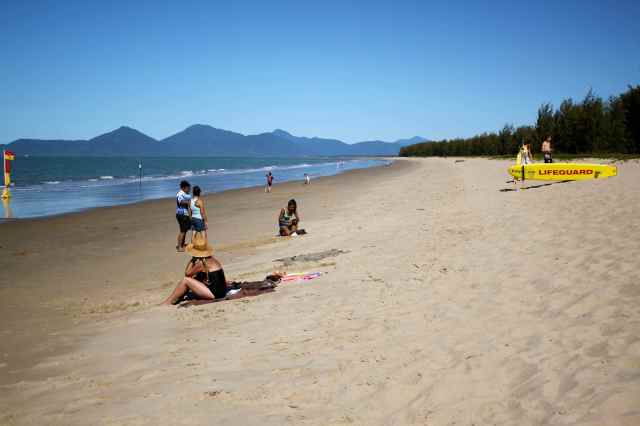 I think we will just manage to squeeze in here.

You have to have an Esky in Australia, it is practically a law.  We picked this one up quite cheaply in a K-Mart and now use it to transport food and chilled drinks around during the day.

A very simple lunch today of crispbread with humous and taramasalata followed by an apple actually, rather then this mandarin.

By about 4 pm the beach was quite deserted – was it something I said?

I was worried about a shark attack ( I wish I had never seen ‘Jaws’) so I spent most of the time we were here in the water with Harvey.  I think I spent about 2 hours in the sea.  It was beautiful – quite warm and rough enough to be interesting but not so rough it was frightening.  The only thing beneath my toes was soft sand.  No pebbles or shells or anything other than lovely sand.  Bobbing about in the sea, beneath a bright blue sky surrounded by beautiful scenery was a great pleasure.  I do love being on a beach.

Yesterday I noticed a large open air swimming pool near our hotel and popped in to find out opening times etc.  I was determined to go.  I have been intending to go swimming for a few weeks now as I used to love it and go regularly.  I do not think I have been for many years.  I can not even remember when I last went lane swimming.

So despite my 2 hours in the sea, I arrived, paid my money, bought some new goggles and went inside the Tobruk Memorial Pool.  It is all rather dated but I found it very charming and thoroughly enjoyed visiting.

The changing rooms were rather spartan.  They are open air too. 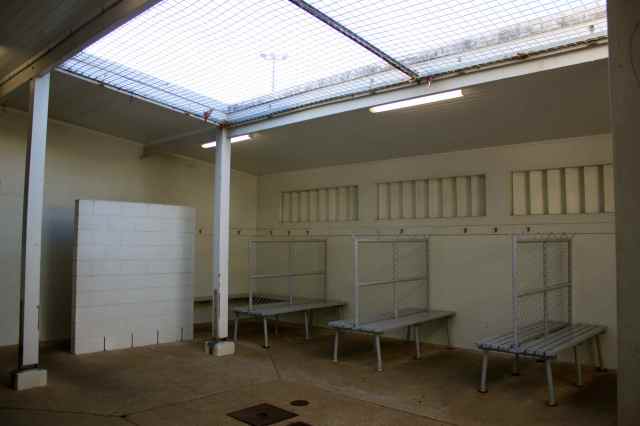 It was just like the pool in ‘Neighbours’.  Lane swimming with a coach barking orders at the trainees and writing times up on a board,

I took these when I had finished so it looks a little dreary but only because the sun was setting.  It was really pleasant swimming with the sun above.

This 50 m pool is unheated so it is quite cool but perfect for serious swimmers.  And it was OK for wannabe swimmers too.  I managed 20 lengths which I was delighted about.  I am sure I will feel it in the morning but for now I am pleased with my efforts. 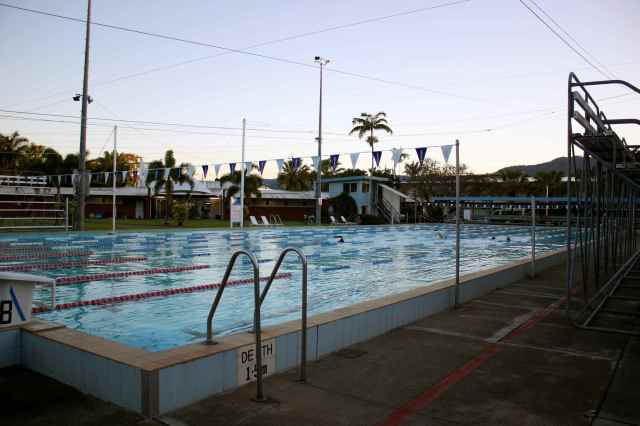 Next to the 50 m pool is this 25 m pool which is heated to 31 °C !  It was lovely and if I have time, I will come here again tomorrow and bring Harvey.  There is also a paddling pool and a huge lawned area with BBQs.  How I wish we had a facility like this at home.

Next to the pool is a large tennis centre which had at least 6 courts, a hockey and rugby stadium.  The Australian’s provision of sporting facilities seriously puts ours to shame.

Back at the ranch we had supper in.  We are moving on tomorrow so I wanted to use up some of our food.  We had some of these lovely eggs left over.

I made ham and cheese omelettes with a salad (lettuce, cucumber, tomato and red pepper). 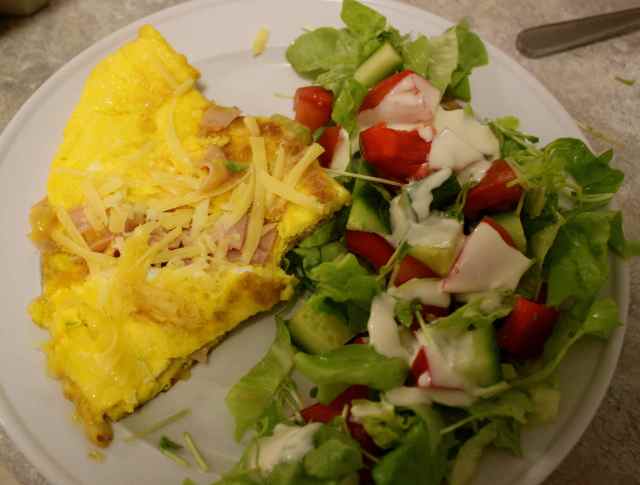 I felt hungry while I wrote this post and had a slice of toast with peanut butter, an Oreo Cookie, 5 Jaffa chocolates and a can of VB.  Apart from that snacking, which I think I deserved actually after all that swimming, I ate very lightly and healthily today.  So I feel pleased with todays eating and exercising efforts.