Posted on September 29, 2012 by Lose Weight and Gain Health

It seems like ages since I had a Saturday at home.  I’d had an early night last night so I was wide awake by 6am and decided to get up and start the day.  After a lovely potter about, doing chores and sorting things out, Harvey and I decided to have porridge for breakfast.  Porridge is a great way to conceal some extra nutrition. 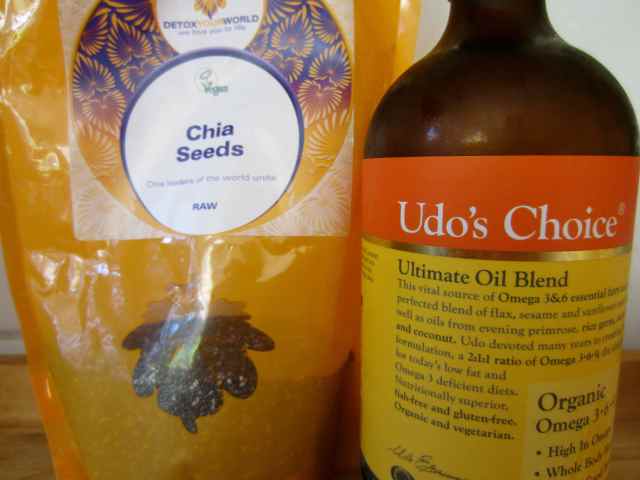 Instead of sugar I mashed a banana in the bottom of the bowl. 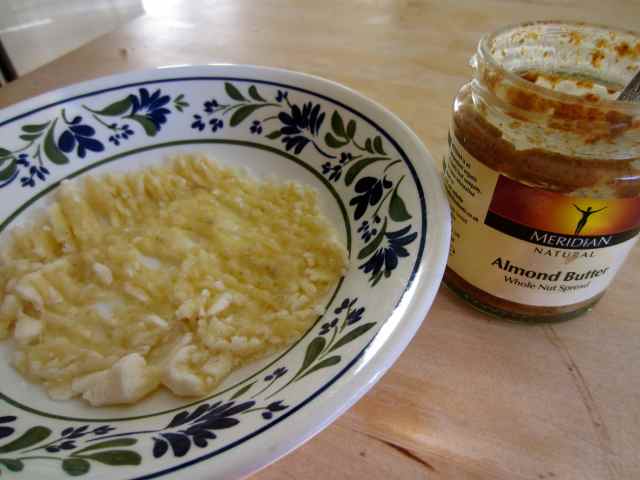 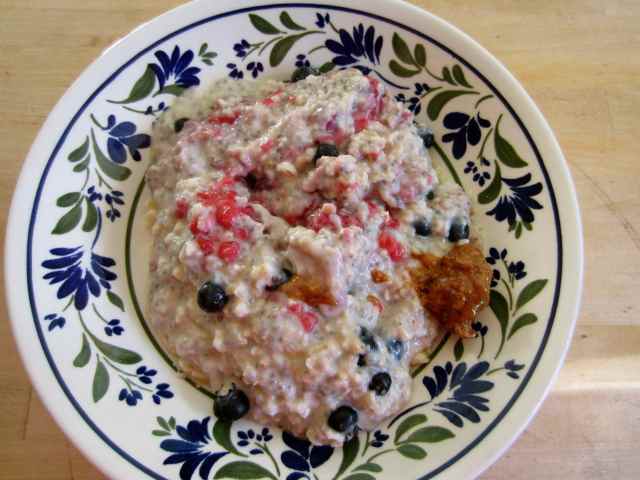 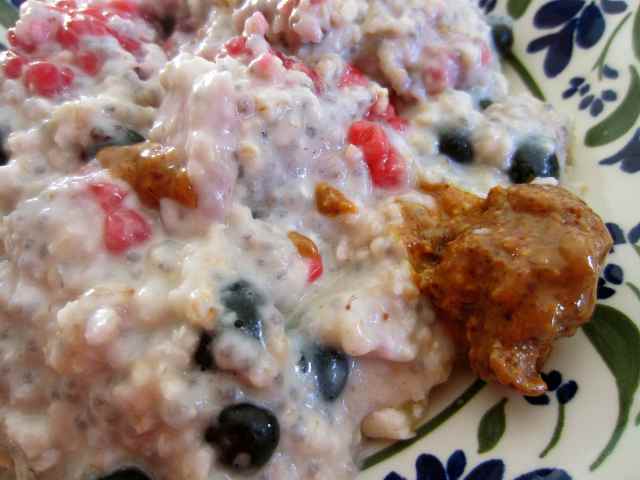 Inspired by last weeks Cake & Bake show I was in the mood for baking.  I bought this flour there and tried out the Soda Bread recipe on the back of the packet.  It was really easy and quick to make.

I used all the milk and I probably shouldn’t have as it became too sticky to shape.  So I plonked it on the baking tray and bunged it in the oven anyway. 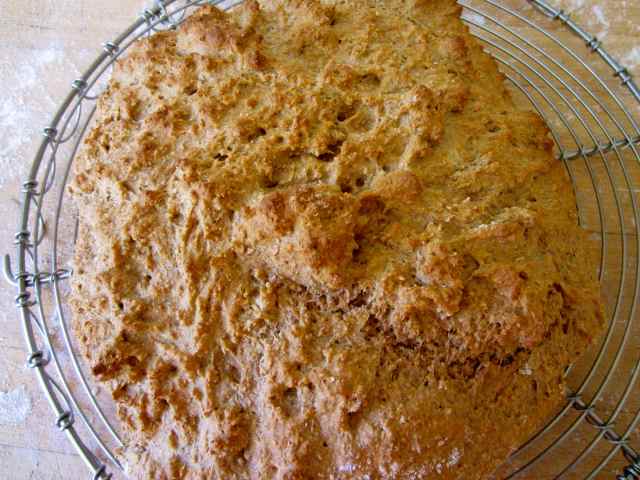 Well, it worked a treat.  The bread that came out had a wonderful texture and flavour.  It was dense, moist and tasty with a good crust.  Just how I like it. 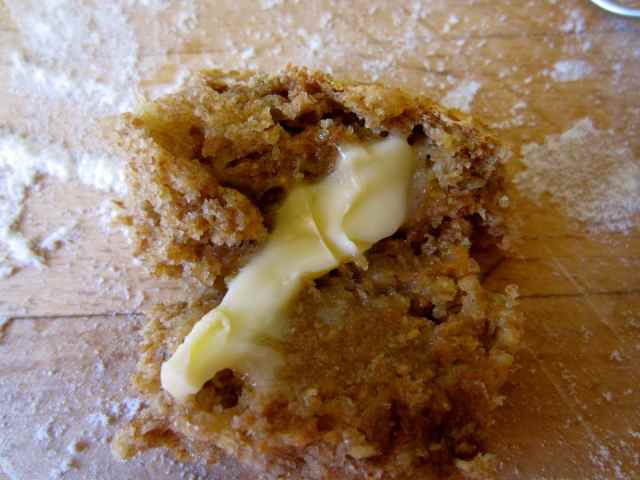 So we ate it for lunch.  I had mine with some stilton, ham, humous, olives and left over roasted veg and chick peas. 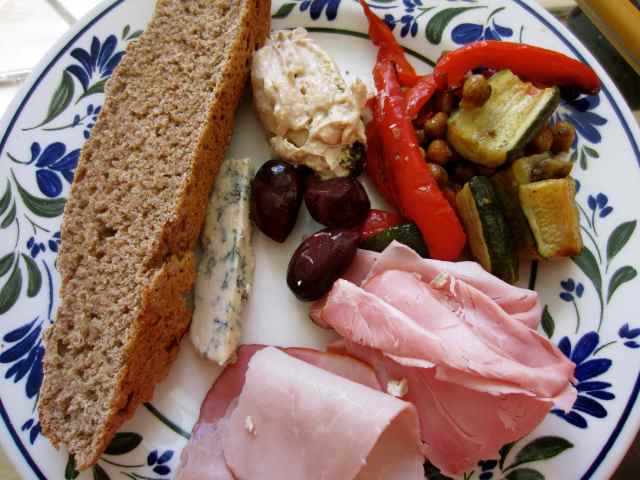 We were meeting up with lots of Harvey’s friends this afternoon at Bedgebury.  Harvey was very sad when Lawrie left to go to New York earlier this year and he was really excited about seeing him today.  Having got the baking bug we decided to make some biscuits to take.  I had a little helper for these! 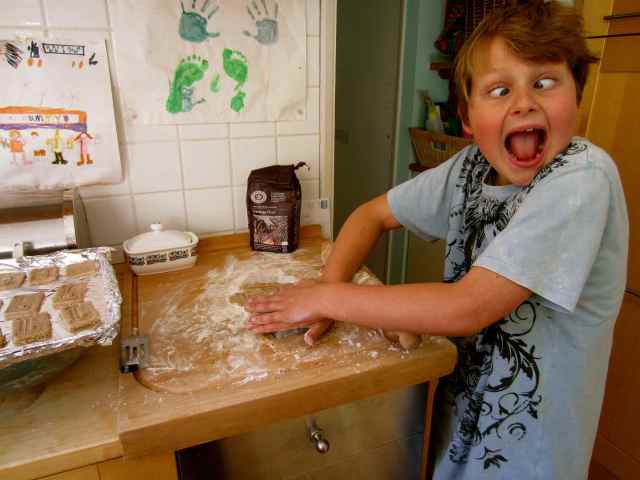 We used another recipe from the back of the flour packet.  Just 3 ingredients! 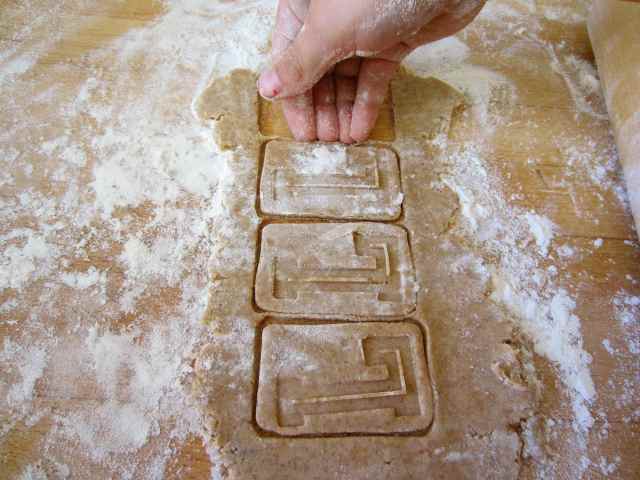 It is amazing that you can make cookies with only 3 ingredients.  They tasted a bit like digestives.  We stamped them with an “L” for Lawrie.  In the end we didn’t take them to the forest though because I was worried we wouldn’t have enough.  I knew 15 boys had been invited but I didn’t know how many younger brothers and sisters would have been coming along too so we left them behind.

Bedgebury was a brilliant choice of venue.  With its miles of walking and cycling tracks it is the perfect choice for a large group of boys.  We walked along the play trail. 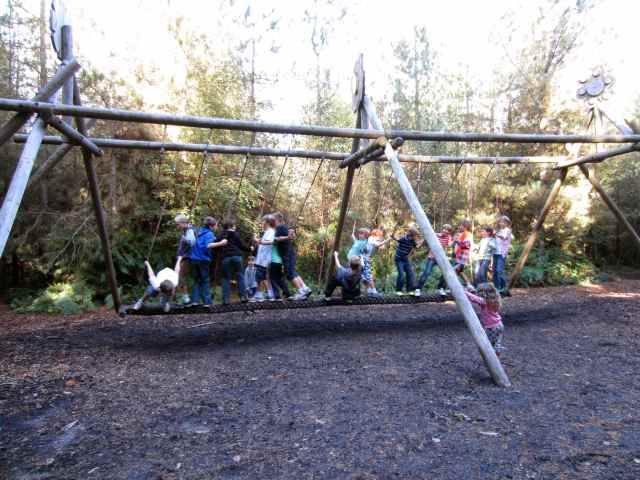 As you walk through the forest, there are plenty of activities such as this amazing large swing which kept them amused for ages. 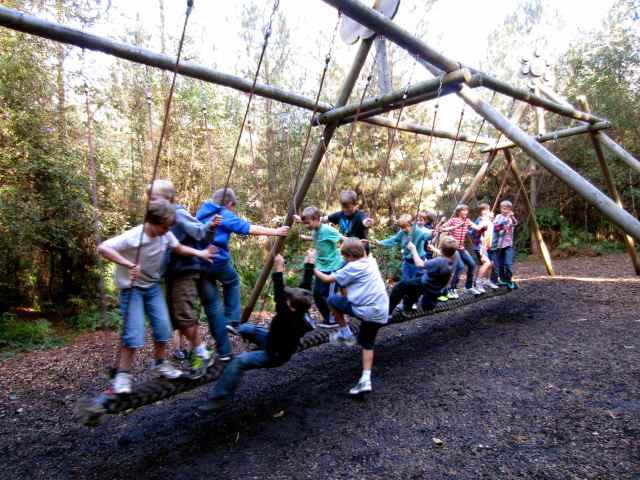 I think we had 11 ten year olds and about 6 younger ones. 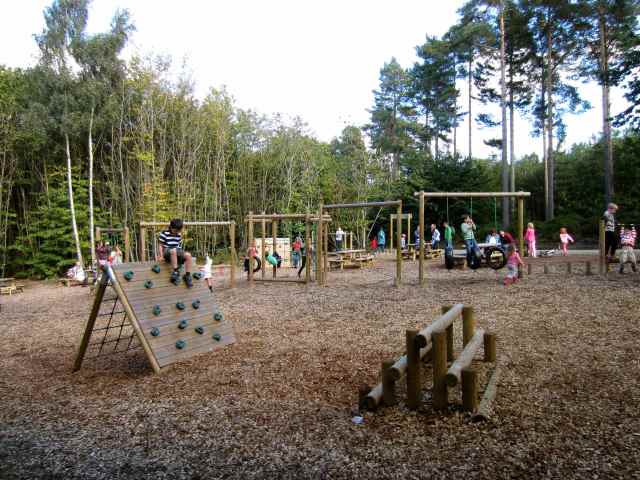 This is such a lovely group of boys.    They all get on so well and they just go off together,  all chatting, laughing, running around and trying everything out, leaving plenty of time for us to have a chat as we strolled through this beautiful forest. 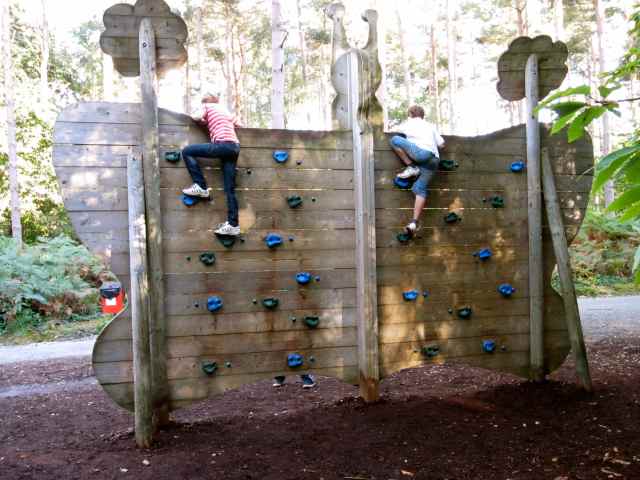 We were lucky with the weather and I think everyone had a good afternoon.  Well Harvey and I certainly did. 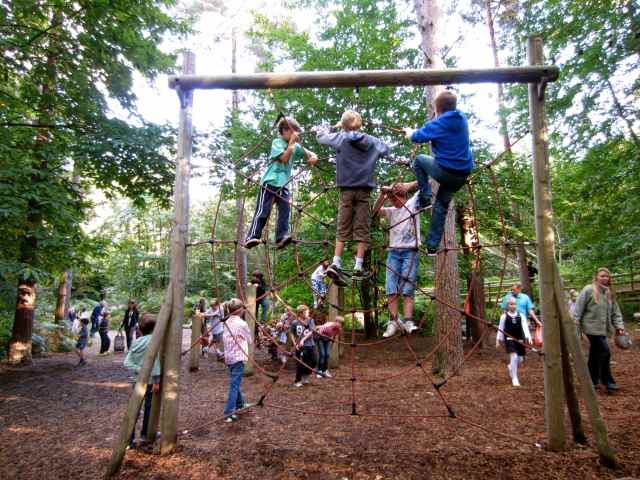 Thank you for organising it Simone, it was great.

Supper was easy.  I made a recipe for Fiesta Chili that I had seen on a blog I read regularly called Kath Eats.  Served simply with lettuce, sour cream and Cheddar.  I did add japalenos and hot pepper sauce to mine.  The chili was made with beef mince and had tomatoes, sweetcorn, green and red peppers and 3 types of beans in it.  Delicious. 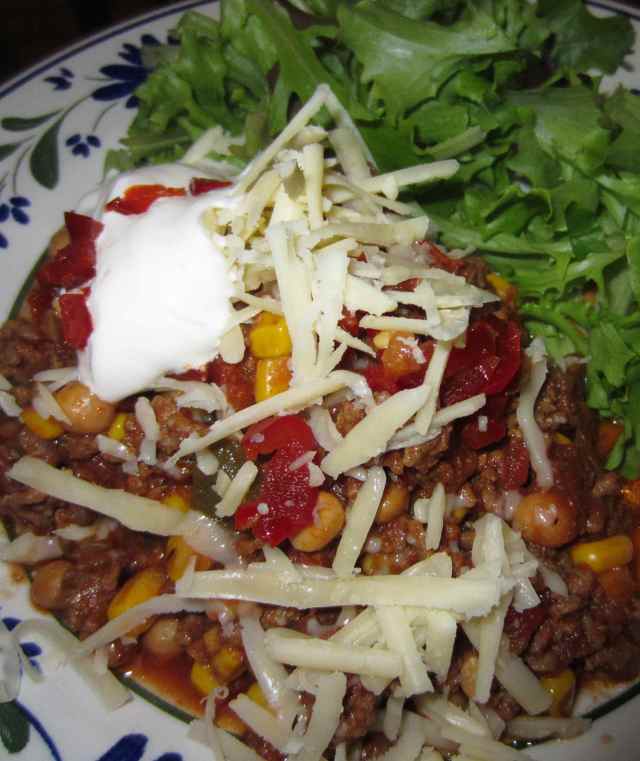 It is the little details that maketh the meal.  Such as having the correct cocktail beforehand 🙂 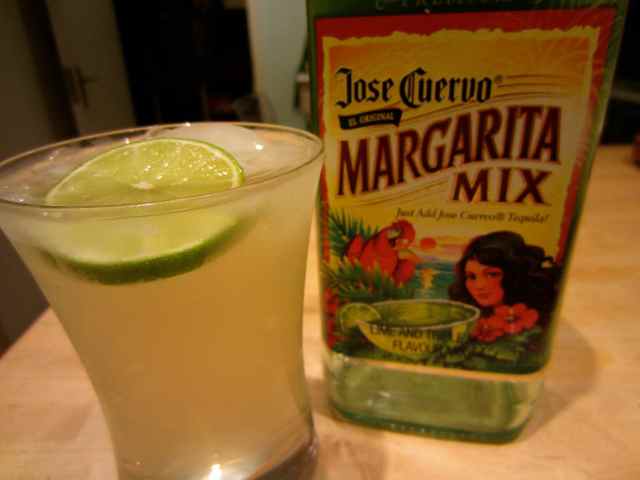 Enjoy the rest of your weekend.

Hi! My name is Zoe and I live in Hastings, East Sussex, with my son Harvey and dog, Milton. I have been fighting the fat for years but this time I am serious. I want to lose weight and gain health. This blog is about how I am changing my lifestyle so I can lose weight but not by just "being on a diet" but by making small changes to our lives so that as I lose weight, I gain health. I want my family to be healthy too and never have to struggle with their weight like I have. In common with many large people, I have gained and lost weight many times over the years. This time, I want to lose it and maintain a healthy low weight. I am interested in eating food that is nutrient dense and delicious and that appeals to children and adults. I do not eat animal products so follow a vegan diet. I try to use locally produced food supplemented with what I can grow myself. I support and try to use local farmers markets and farm shops. Another objective is to add more exercise to our days. It sounds so simple when I write it down :-)
View all posts by Lose Weight and Gain Health →
This entry was posted in Healthy Lifestyle, Recipe and tagged Beef, Bread, Porridge. Bookmark the permalink.