The Joes Were Sloppy

Posted on January 14, 2012 by Lose Weight and Gain Health

You get 2 recipes today 🙂 . I have eaten out a bit in the past few days which is lovely but I do miss cooking so I was eager to get going in the kitchen.  Plus today is Saturday so I had time to cook something more time-consuming than usual.

Thanks to Gina at Skinny Taste for her recipe for Oatmeal with Blueberries and Bananas. It was such a cold and frosty morning, Harvey and I wanted something hot for breakfast and this was perfect.  It was easy to make but due to the cooking time, start this one hour before you want to eat.  I think it would work if you left the nuts out, so if you have an intolerance/allergy to nuts, you could adapt and still enjoy this recipe. 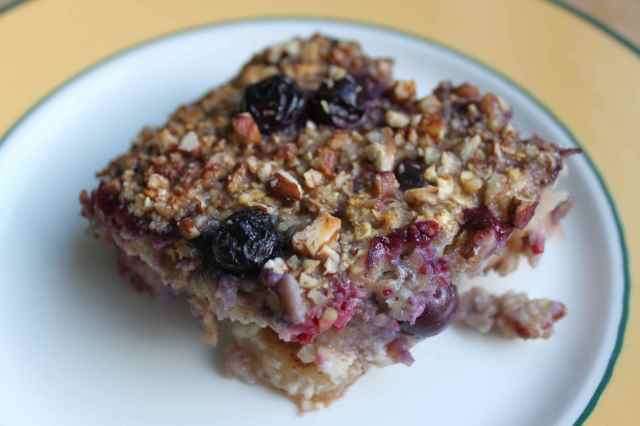 Oats Baked With Berries And Bananas 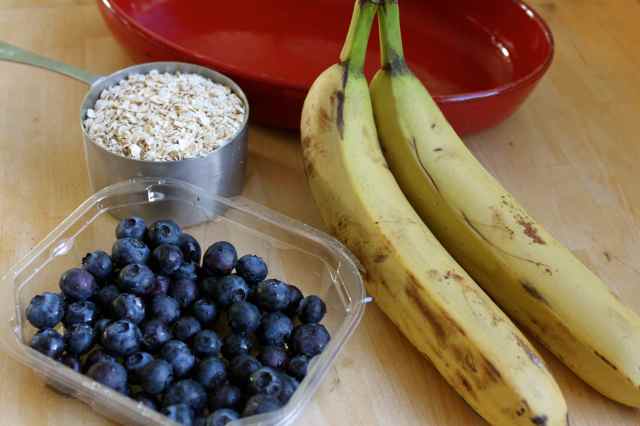 Preheat the oven to 190 ° C.
Lightly oil a baking dish that is approximately 8″ x 8″ (I put some oil on a piece of kitchen paper and wipe round the dish as I dislike oil sprayers but you could use one if you have it).
Place the banana in a layer in the oiled dish.
Add half the berries, ¼ tsp cinnamon and 1 tbsp of honey.
Cover with foil and bake in the oven for 15 minutes. 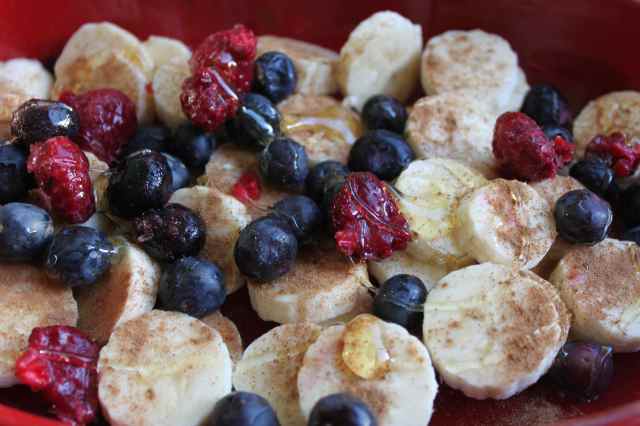 In a bowl, combine the oats, half the nuts, baking powder, remaining cinnamon and salt. 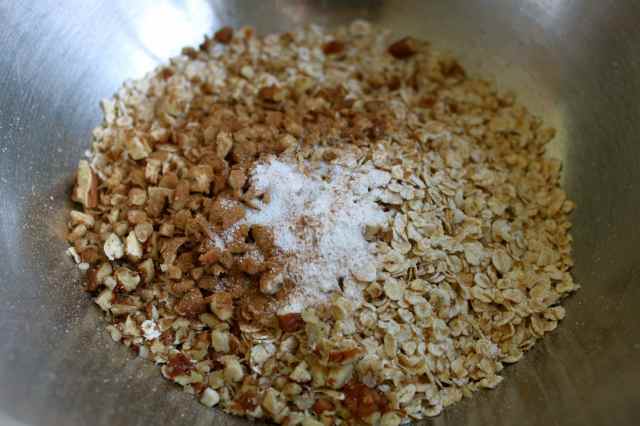 In another bowl combine the wet ingredients and whisk to mix well: the remaining honey, milk, egg and vanilla extract. 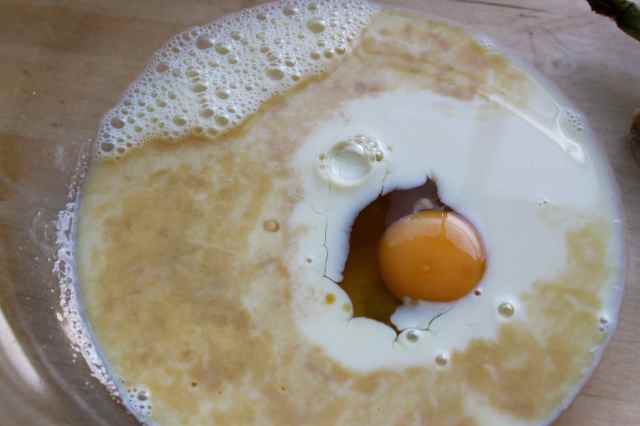 Remove the bananas from the oven and take off the foil.
Add the oat mixture to the dish and spread over the bananas and berries.
Pour the milk mixture over the oats, making sure the oat and milk mixtures are evenly distributed.
Put the remaining berries and nuts on the top. 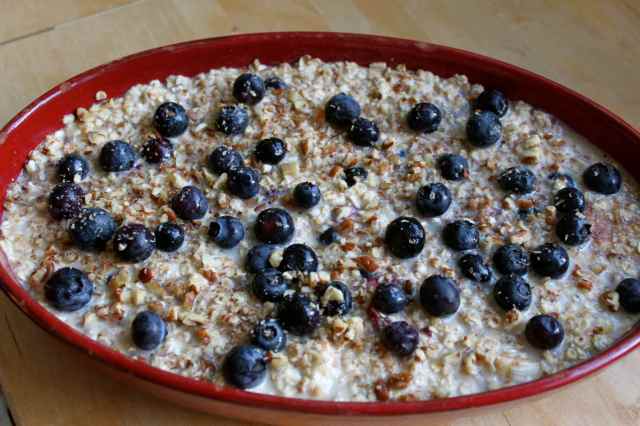 Bake in the oven for 30 minutes or until the top is golden and the oatmeal is firm. 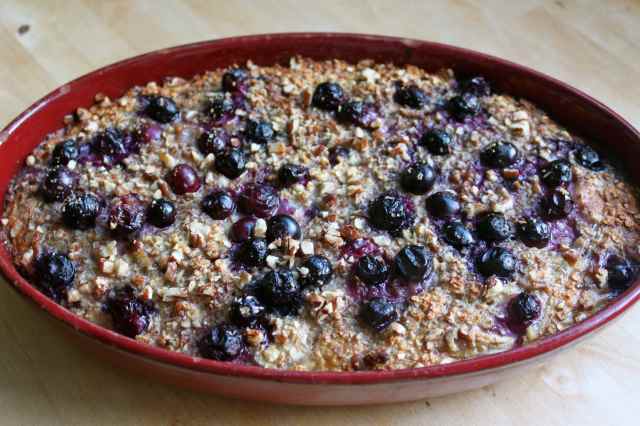 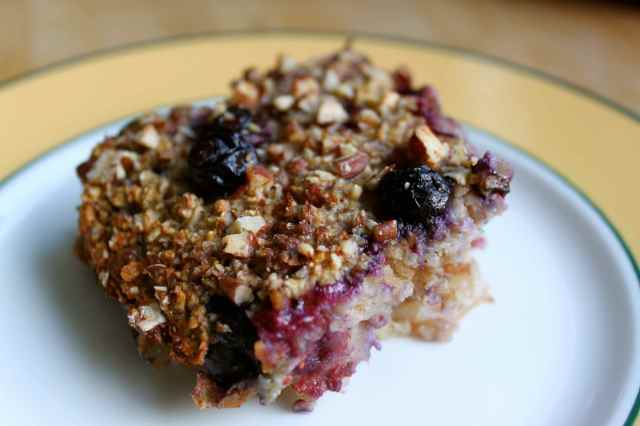 I was worried the berries on the top may have burned or gone dry but they didn’t at all.   By the time it was ready it was quite late and I was very hungry.  I had 2 portions and I had the second with some Alpro Vanilla Yogurt.  For some reason, 2 tbsp of this yogurt has 0 points :-).  Rather bizarrely, 2 portions of the oatmeal dish are only 7 WW points, whereas 1 portion is 4 points.  So I enjoyed 2 portions and some yogurt for just 7 WW points.  It was tasty and just the thing for a cold winters morning.  Plus it was a recipe on the list of recipes I wanted to try so I can tick that one off now.

For lunch I made another recipe from my list.  This time I made the Lentil Sloppy Joes from The Edible Perspective.  I had to adapt the recipe quite a lot, not because I thought Ashley’s recipe needed so much adapting but because I had to use ingredients I had at home.  For example, I didn’t have enough green lentils so I used a mix of green and Le Puy lentils. 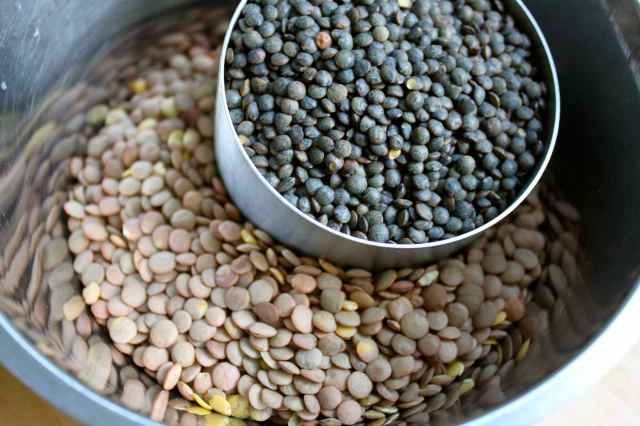 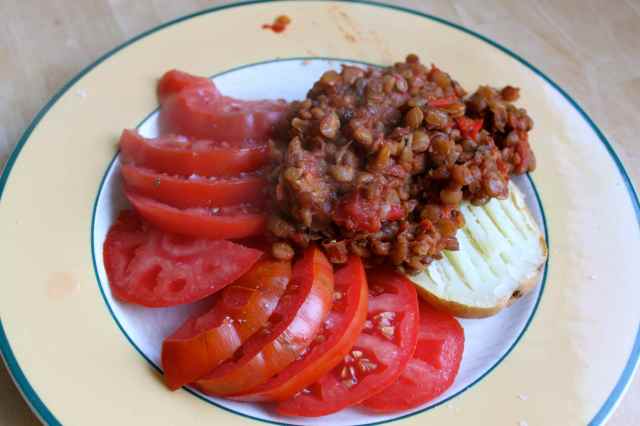 I served this with ½ a baked potato and a large fresh tomato.  The potato cooked in the oven alongside the lentil sloppy joe.  The lentils went very well with a large and juicy tomato. 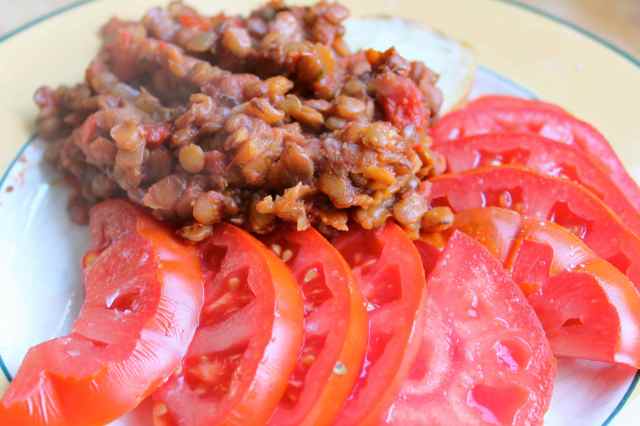 Traditionally a sloppy joe is made with minced beef and is served in a burger bun.  I intensely dislike the idea of something sloppy in a white bun!  But on a jacket potato it works really well.  And I think this lentil version is just as tasty as a beef version.  It was slightly too sweet for me and I would use a little less sugar next time.  It must be the easiest recipe to make though – put all ingredients in a pan and heat :-). 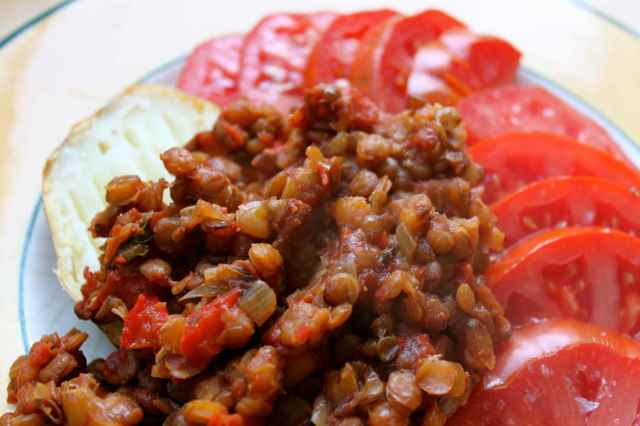 I really enjoyed this dish and the 3 of us ate about half the quantity.  The entire quantity has 32 WW points so each portion is only 4 WW points.  I estimate I had two portions for lunch, plus half a potato with 2 tsp butter in it which makes 14 WW points.

We walked for just over an hour in the forest.  Well, James and I walked and Harvey cycled. 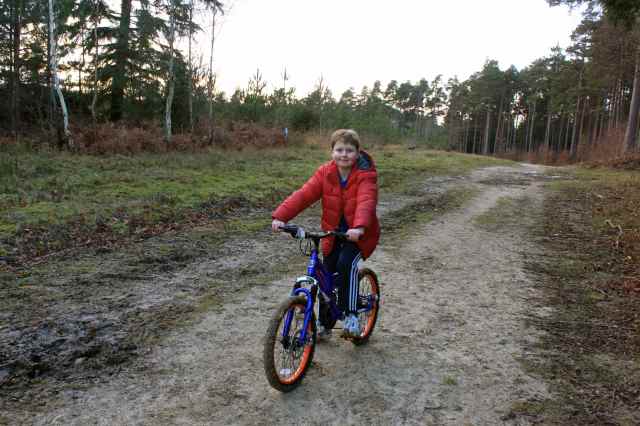 It was cold and crisp but bright out. 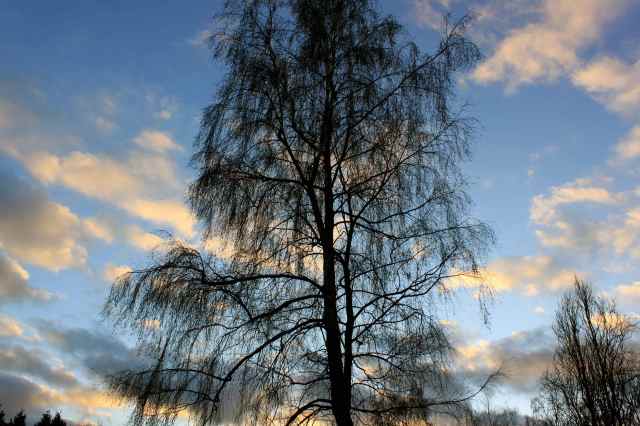 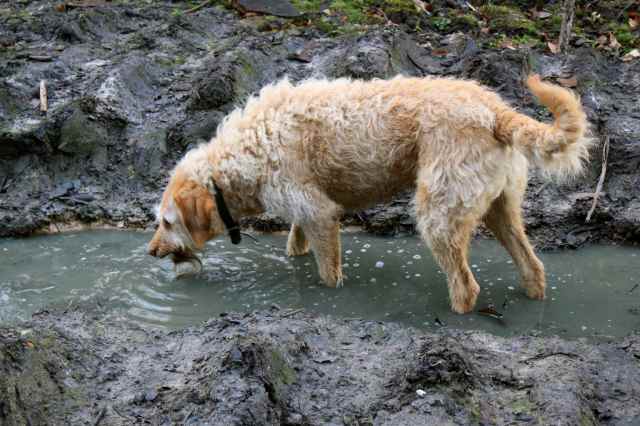 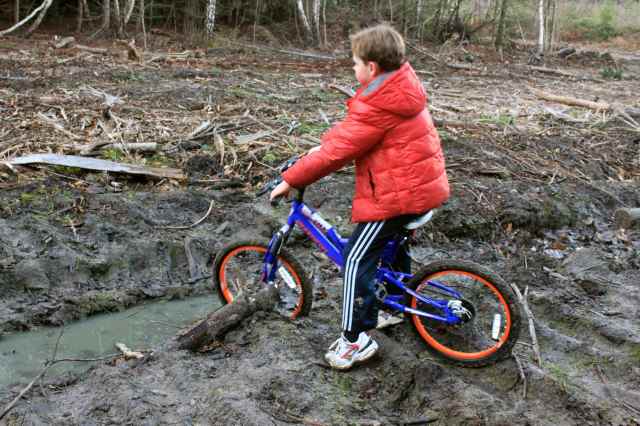 Despite the sun shining all day, the ice on top of the bowl of water did not melt.  Nice ice baby! 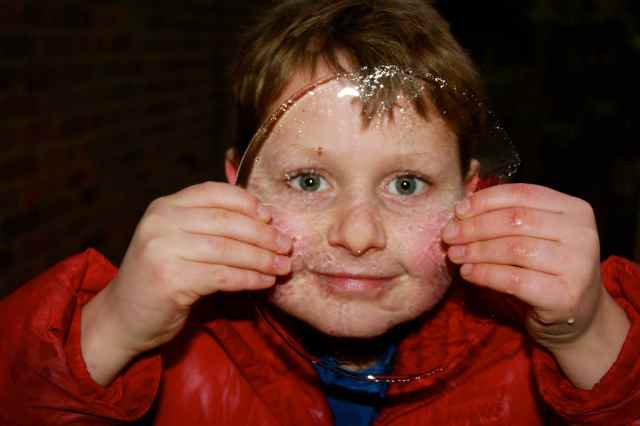 Supper was another 2 portions of the lentil sloppy joe which reheated perfectly.  I was very hungry by the evening and I wanted something substantial so I added a circle of goats cheese.  The Chèvre blanc type.  I had all 100 g of goats cheese to myself.  It seemed decadently piggy but I had quite a few points left so why not use them?  Plus I earned more activity points today. 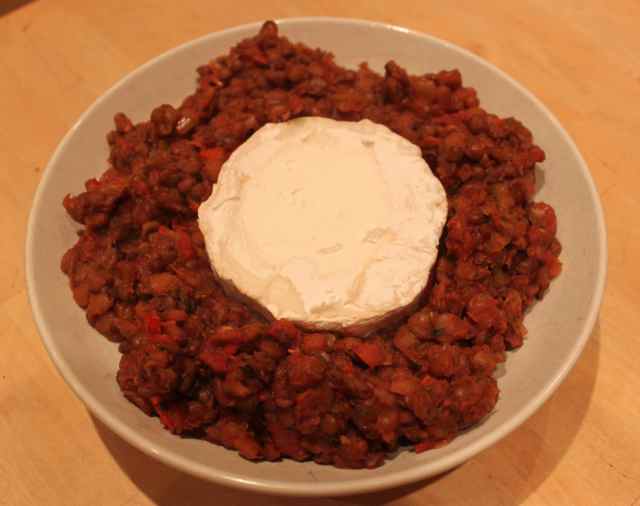 It was sublimely delicious.  The chalky saltiness of the goat cheese worked perfectly with the sweet spicy tomato sauce.  The sloppy joe were reheated so it was piping hot and the cheese went soft and parts melted in to the lentils. Yummy.  Yummy.  Yummy. A meal definitely to be repeated.

Hi! My name is Zoe and I live in Hastings, East Sussex, with my son Harvey and dog, Milton. I have been fighting the fat for years but this time I am serious. I want to lose weight and gain health. This blog is about how I am changing my lifestyle so I can lose weight but not by just "being on a diet" but by making small changes to our lives so that as I lose weight, I gain health. I want my family to be healthy too and never have to struggle with their weight like I have. In common with many large people, I have gained and lost weight many times over the years. This time, I want to lose it and maintain a healthy low weight. I am interested in eating food that is nutrient dense and delicious and that appeals to children and adults. I do not eat animal products so follow a vegan diet. I try to use locally produced food supplemented with what I can grow myself. I support and try to use local farmers markets and farm shops. Another objective is to add more exercise to our days. It sounds so simple when I write it down :-)
View all posts by Lose Weight and Gain Health →
This entry was posted in Recipe and tagged Banana, Blueberries, Goat's Cheese, Lentils, Oats, Raspberries. Bookmark the permalink.

5 Responses to The Joes Were Sloppy