Posted on January 3, 2012 by Lose Weight and Gain Health

What a splendidly good girl on a diet I have been today :-).  I started with a cup of hot water with cayenne pepper and freshly squeezed lemon juice.  Apparently this boosts your metabolism.

I just had a banana for breakfast as I was not hungry.  I know it is not healthy to skip breakfast but I had eaten so much yesterday I did not need food first thing today.

For lunch I made an incredibly healthy and very tasty soup.  I have come across many blogs that posted new year recipes containing black eyed peas/beans as they are considered to be good luck.  Apparently (according to Wikipedia) this began as a Jewish tradition and is now common in the USA, especially the South.  The beans resemble coins and swell when you cook them which suggests your money grows.  It is luckier to eat them with green vegetables such as collard greens or kale as the folded leaves resemble paper money.  Well, I am a couple of days late but hopefully I will still be lucky.

For inspiration I looked to one of my favourite food blogs, the Edible Perspective, and used a recipe she posted a year ago for Black Eyed Peas, Collard Greens and Tomato Soup.  I had to adapt the recipe slightly to use ingredients I had available and to make the soup for 3 whereas the original serves 6.  It was amazing. 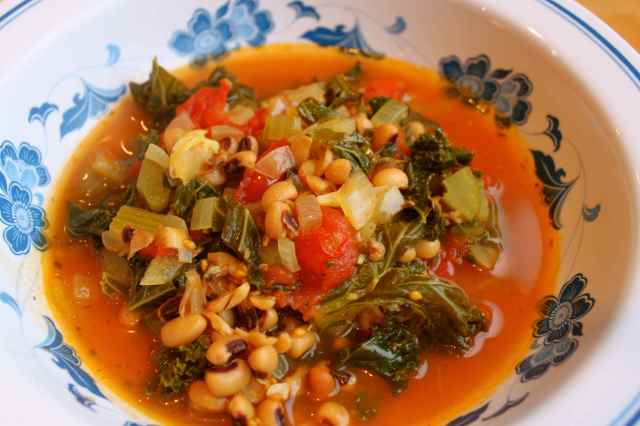 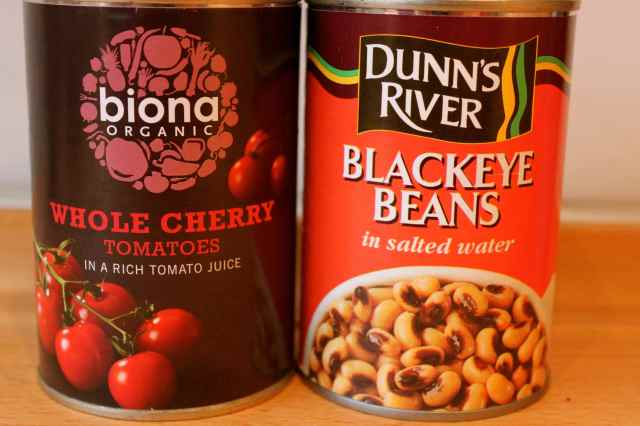 Heat 1 tbsp oil in a large pan and add onion and celery.  Put lid on pan and sweat over a low heat for 10 minutes, stirring occasionally.
If using fresh herbs (which are better) snip required quantity from plant.

Add herbs and garlic to the onions and celery in the pan. 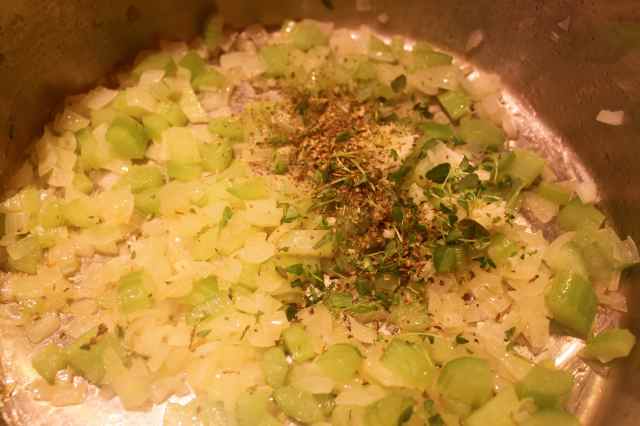 Fry together for a minute and add vegetable stock, tomatoes and black eyed beans.

Bring to the boil then simmer gently for 20 minutes.
Add the kale and simmer for a further 10 minutes.
Season to taste and serve.

This soup is very low in fat – 1 tbsp of olive oil between 3 portions.  To make the meal healthier you should add a healthy fat.  I planned to add half an avocado but when I cut it open it was rubbery and inedible so I added 1 tbsp of pumpkin seeds.

Lunch was 6 WW points (4 for the soup and 2 for 1 tbsp pumpkin seeds).  The children ate theirs with crackers and peanut butter but I ate mine as it was with nothing on the side as I wanted to save my points for supper.  Lara and Harvey enjoyed the soup and Harvey declared it the best soup he had ever had.  We will definitely be making this one again.

We have had terrible storms today.  They started last night and the wind and rain woke me up several times.  In the middle of making lunch, there was the most torrential down pour.   This is the rain on my front garden which caused flooding in the flower beds

and this is the rain overflowing the gutters which can not keep up with it.  Extraordinary.

Supper was a family favourite of Cheesey Vegetables.  I made a dairy free white sauce with margarine and soya milk.  I add a vegan cheese to Harvey’s and for the rest of us I added Cheddar to the white sauce and then topped it with Parmesan and poured it over a mix of steamed broccoli, cauliflower and carrots.   I served mine on a bed of mashed pumpkin (¼ of a Crown prince which I wrapped in foil and baked in the oven for 1 hour at 180 ° C ).

Supper was 22 WW points.  The pumpkin was free as were the vegetables but I had loads of the cheese sauce.  The white sauce was 8 WW points, the 80g of cheddar in the sauce was 9 WW points and I had 3 tbsp Parmesan cheese melted over the top which was 5 WW points.

That was a very point/calorie heavy supper but I could eat it as the rest of my day had been so light on points/calories.  I really enjoyed it.  But not as much as  feeling proud of myself for eating within my points allowance.  And not as much as that soup.  Which really was super :-).

Hi! My name is Zoe and I live in Hastings, East Sussex, with my son Harvey and dog, Milton. I have been fighting the fat for years but this time I am serious. I want to lose weight and gain health. This blog is about how I am changing my lifestyle so I can lose weight but not by just "being on a diet" but by making small changes to our lives so that as I lose weight, I gain health. I want my family to be healthy too and never have to struggle with their weight like I have. In common with many large people, I have gained and lost weight many times over the years. This time, I want to lose it and maintain a healthy low weight. I am interested in eating food that is nutrient dense and delicious and that appeals to children and adults. I do not eat animal products so follow a vegan diet. I try to use locally produced food supplemented with what I can grow myself. I support and try to use local farmers markets and farm shops. Another objective is to add more exercise to our days. It sounds so simple when I write it down :-)
View all posts by Lose Weight and Gain Health →
This entry was posted in Lose Weight, Recipe and tagged Black Eyed Beans, Cheese, Kale, Tomatoes. Bookmark the permalink.