Spaghetti With A Difference

Posted on December 7, 2011 by Lose Weight and Gain Health

When I woke up today I felt full of energy and I have charged around at a hundred miles an hour all day, completing a ton of chores.  I am still full of beans and can’t believe it is 9:30pm!  I put this energy surge down to the improved diet I have eaten this week.  Raw food does give you a big nutrient boost and I think it helped me sleep because my body could rest properly, as it wasn’t busy digesting food.  I will make sure I add a lot more raw food to my diet, but I didn’t have much today.

Breakfast was banana porridge.  I had half a banana, 1/3 of a cup of oats and 140ml unsweetened almond milk plus some water as I don’t like it thick and gloopy.  I put it all in the pan, bring to the boil and then simmer for 5 minutes.

I served it with a spoonful of almond butter with dried berries.  So delicious.

First task of the day was to finish painting the hi-fi cabinet I started painting on Sunday.  I have had this cabinet for years and disliked it almost since the day I got it.  I am not sure why it has taken so long to get round to painting it but I am glad I have now.  This is the before shot.

Many coats of paint later it looked like this.

And in situ I was really pleased with it.

I had 2 clementines as a snack.

They are so sweet and juicy and full of flavour at this time of year.  Mmmmm. 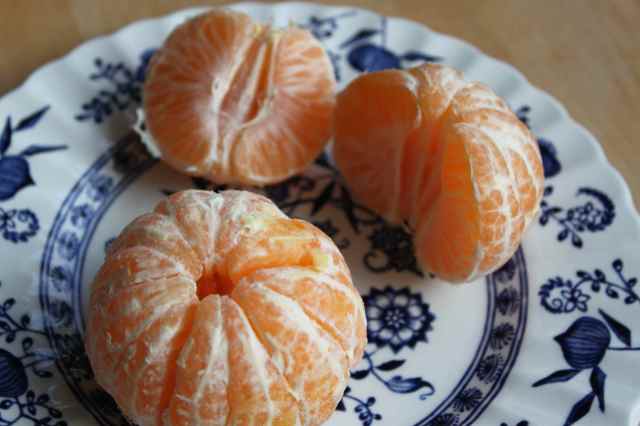 While I washed my paint brush I decided the utility room was chaotic so I tidied and cleaned it.  I even sorted out the shelves in the scary spider infested cupboard (I didn’t see any).

Having moved the painted cupboard and large speakers out of the dining room, I was inspired to start re-arranging the dining room, which involved emptying the dresser so I could move it.  I do find it very therapeutic to have a complete sort out and I ended up spring cleaning the inside and outside of every piece of furniture and even washed the walls.  I have one corner left to do so feel rather pleased and I like the new furniture arrangement too.

Lunch turned out to be one of the most delicious meals I have had for ages.  To put that in context, I mean compared to the food I have cooked myself quickly, not some of the amazing meals friends have cooked me recently.

I bought a spaghetti squash recently, which I had never had before.

I cut it in half and scraped out the seeds.  I put one half in the fridge for another day (or so I thought at the time).

To cook the spaghetti squash, I put it cut side down on a baking tray with a small amount of water and cooked it at 180 ° C for 40 minutes.  It was cooked!  How easy was that?  When you drag a fork through it, the solid looking squash splits in to “spaghetti” ribbons.

I served the spaghetti squash with the last piece of corn pudding and the last of the roasted veg which I had cooked with quinoa.  I didn’t serve the quinoa because I didn’t need that many carbs in one meal.  I also had 4 rashers of lean back bacon and some curly kale I cooked in the bacon pan with some maple syrup.

This meal was fabulous.  I really enjoyed the corn pudding and roasted vegetables.  The spaghetti squash is not as dense and heavy as other squashes and has a more delicate flavour.  I had it with lots of freshly ground black pepper.  The maple syrup sweetened kale and salty bacon complemented the meal perfectly.  I absolutely LOVED this meal and could eat it every day.  But I won’t.  Sigh.

Supper was meant to be a spicy stir fried veg and noodles meal but Harvey begged me for spaghetti bolognese.  He is usually happy to eat what I cook but he was quite persistent tonight so we stopped off to buy some mince on the way home.  I fried a large onion with garlic, fried off the meat and added chopped mushrooms, canned tomatoes, and the left over half can of baked beans I had in the fridge.  While I was cooking the bolognese I decided to finish off the spaghetti squash so I had the other half for supper, instead of pasta spaghetti. 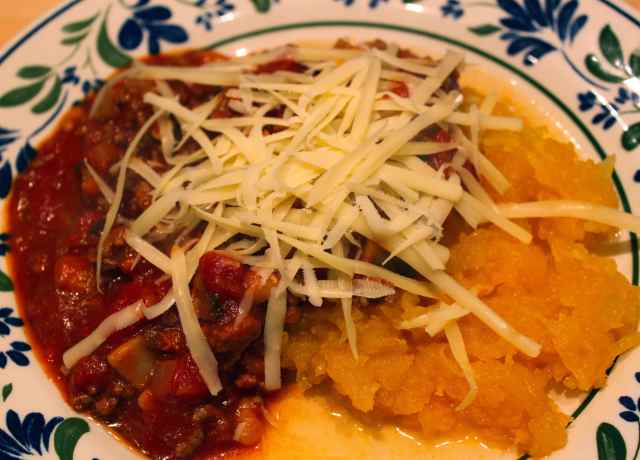 I served it with Gruyere.  Not a conventional cheese to serve with spaghetti squash and bolognese meal but it went really well with the flavours.

I feel as if I have eaten a massive amount of food today but I thought I had eaten healthily.  When I review my food diary (i.e. my blog photos), I can see it is full of vegetables which is good.  The only fat I added to my diet was 1 tsp of groundnut oil I used to fry the bacon and the same amount I used to fry the onion and garlic for the bolognese.  But I did have some food that naturally has a high fat content; the lean bacon, corn pudding,  lean steak mince and cheese all contain saturated fat.  I also some added sugar; 2 tbsp maple syrup for lunch and there was sugar in the corn pudding and in the less than ¼ can of beans in my portion of the bolognese.  I should calculate the points but it’s late and I am now feeling tired.  I did pack in a lot of nutrients as well and I enjoyed my first ever spaghetti squash.

Hi! My name is Zoe and I live in Hastings, East Sussex, with my son Harvey and dog, Milton. I have been fighting the fat for years but this time I am serious. I want to lose weight and gain health. This blog is about how I am changing my lifestyle so I can lose weight but not by just "being on a diet" but by making small changes to our lives so that as I lose weight, I gain health. I want my family to be healthy too and never have to struggle with their weight like I have. In common with many large people, I have gained and lost weight many times over the years. This time, I want to lose it and maintain a healthy low weight. I am interested in eating food that is nutrient dense and delicious and that appeals to children and adults. I do not eat animal products so follow a vegan diet. I try to use locally produced food supplemented with what I can grow myself. I support and try to use local farmers markets and farm shops. Another objective is to add more exercise to our days. It sounds so simple when I write it down :-)
View all posts by Lose Weight and Gain Health →
This entry was posted in Uncategorized and tagged Bacon, Spaghetti Squash. Bookmark the permalink.

2 Responses to Spaghetti With A Difference