Posted on November 22, 2011 by Lose Weight and Gain Health

Unless they are fed a diet of junk food and refined carbs, I believe children instinctively do not over eat.  So when Harvey decides he has eaten enough breakfast, I never insist he finishes the bowl.  But I hate throwing food away.  So I decided to add some pumpkin to his left over Oat Crunchie cereal and make a smoothie. 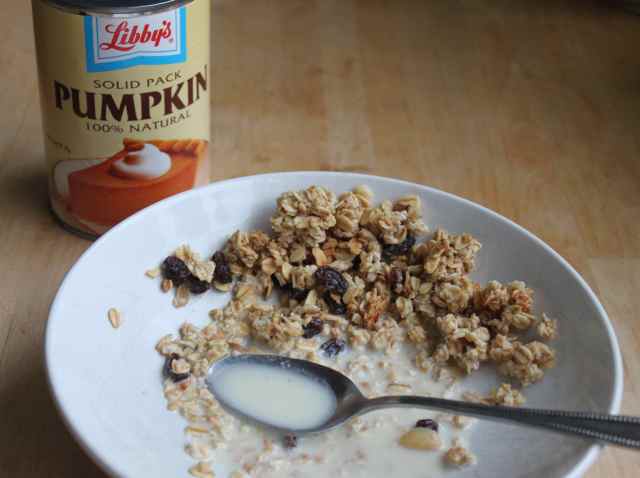 I made a smoothie with the left over cereal, 1/3 of a can of pumpkin puree, almond milk and a tbsp of clementine cashew nut butter.  Oh my!  It was great.  It was thick and smooth and the cereal gave it some lovely chewy texture as I only blended it slightly.  Delicious.

Before going to play tennis, I finished something I had started yesterday.  I made apple butter for the first time ever.  My apple tree has produced a bumper crop this year.  I have eaten plenty already and more are in the freezer, ready for pies or crumbles.  There are still so many apples left on the tree. 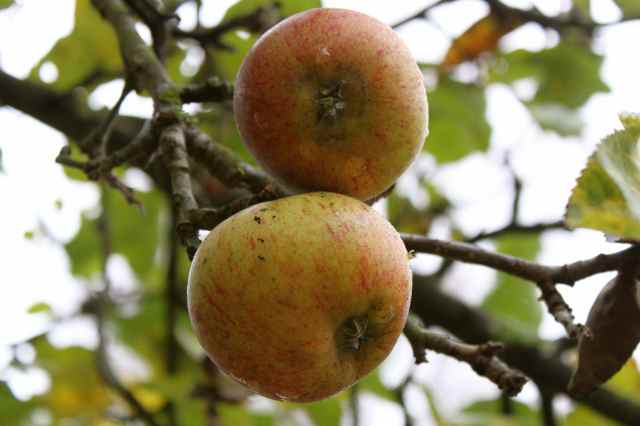 One of my dogs loves apples and he has eaten lots too.

There are so many apples this year so I looked around my favourite food blogs and came across apple butter.  This seems to have the texture and consistency of butter and is the colour of marmite.  It is made by slow cooking apples with sugar and spices for many many hours so it reduces.  I adapted this recipe from various that I looked up.

So I picked 5 and a half pounds of apples.

Mixed the sugar with the cinnamon, cloves and salt in a large bowl.  I peeled and chopped up each apple, and as I put it in the cooking dish I covered it with a tsp of the sugar and spice mix so the apples didn’t go brown.  I used a large Le Creuset (ironware) casserole dish with a tight fitting lid.

The apples nearly filled the dish.

The apples brown as their sugars caramelise and they reduce in size.  The smell in the kitchen was quite heavenly.

After 9 hours cooking, there was too much liquid left so I turned the heat up to 200 ° C again and cooked it without the lid for about another hour and a half, checking regularly to make sure it doesn’t burn.

You eventually end up with this, and as you can see, the apples have reduced massively! 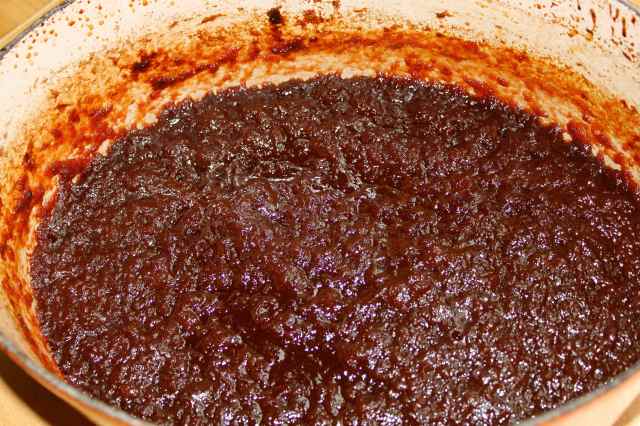 It was dark brown, very thick and tasted lovely.  Hard to believe this used to be apples and sugar.

I sterilised 4 jam jars by placing them in the oven on 180 ° C for half an hour.  I put 2 layers of newspaper on the oven shelf and stood the jars on that.  I put the jars in to a cold oven and then turned it on, so they adjusted to the heat and did not crack.

The apple butter was boiling hot and it sizzled and bubbled when I added it to the jars which was slightly disconcerting but the glass held firm and once it had cooled slightly, I put the lids on.

Le voila, 3 and a half jars of apple butter.  Ready to be stirred in to smoothies, porridge or natural yogurt or spread on bread, as it is or with cheese.  I think a slice of bread, spread with apple butter and a strong Cheddar would be delicious.

Yesterday the apples were on the tree, today they are reduced and caramelised and in a jar! 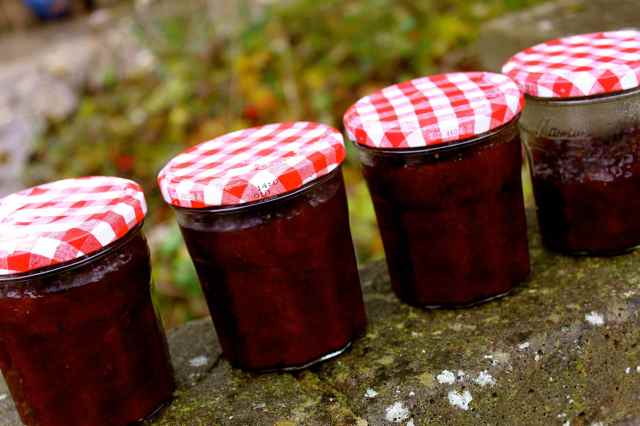 For lunch I wanted to use up some of the broth left over from Sundays gammon.  The gammon was cooked in cider with clove studded onions, leeks, carrots and potatoes.  I removed the onions and blitzed the rest in the blender so it was smooth.  I added some water and red lentils.

Red lentils take about half an hour to cook and lunch was ready.  It was a very thick soup and quite sweet due to the cider.  Very enjoyable.

In the afternoon I was peckish so I had some Greek yogurt with some almonds and apple butter.  It was lovely.  I am storing it in the fridge as I have never tried to sterilise a jar before and I don’t want it to go off.  It has set, like a jam.  The flavour is fabulous; apples and caramel.  Looking forward to the next spoonful.

Supper was brown rice with vegetables ( red and green pepper, pak choi and mange tout) stir fried in oyster sauce, prawns and a side salad of cherry tomatoes and cucumber.

Simple, delicious and nutritious and enjoyed by all, as evidenced by 3 cleared plates 🙂

Hi! My name is Zoe and I live in Hastings, East Sussex, with my son Harvey and dog, Milton. I have been fighting the fat for years but this time I am serious. I want to lose weight and gain health. This blog is about how I am changing my lifestyle so I can lose weight but not by just "being on a diet" but by making small changes to our lives so that as I lose weight, I gain health. I want my family to be healthy too and never have to struggle with their weight like I have. In common with many large people, I have gained and lost weight many times over the years. This time, I want to lose it and maintain a healthy low weight. I am interested in eating food that is nutrient dense and delicious and that appeals to children and adults. I do not eat animal products so follow a vegan diet. I try to use locally produced food supplemented with what I can grow myself. I support and try to use local farmers markets and farm shops. Another objective is to add more exercise to our days. It sounds so simple when I write it down :-)
View all posts by Lose Weight and Gain Health →
This entry was posted in Recipe and tagged Apples, Smoothie. Bookmark the permalink.

6 Responses to So Many Apples